OTHER IDENTITY | The "lockdown..

I called the number +39 334 2928559… Drin Drin… I got an answer from Daphne, not the nymph who in Greek mythology turns into a laurel plant, but a trio of artists – Filippo De Marchi, William Merante and Giovanni Riggio – who gave life to their multidisciplinary art project in 2019.

At the MASSIMO exhibition space in Milan, they have opened their first solo exhibition, which is entitled «+39 334 2928559» and will run until 19 April. Everything turns around the title, a series of digits that can be identified as a telephone number. Immediately there is a desire for connection, dialogue, and openness to interaction.

In fact, the title itself could be the artwork and could open the way for social experimentation. I asked what the meaning of their work is, and they explain that at MASSIMO they have opted for a dialogue with the exhibition space, creating an installation dimension of the work.

For the development of the work, they focused on the generation of ideas, based on feelings and impressions found along the research. Following their instincts, they tried to answer questions, some of which became answers, reasoning over telephone thinking.

Inside the space, the series of numbers is taken up, enlarged, and combined with a color component. The sensation is that of entering Tim Burton’s «Alice in Wonderland», in a dazed world of irrationality. The grey tone of the floor has been extended to the whole room. It is as grey as brain matter and as the sensation that virtual space gives us.

The aim is to eliminate the cardinal points and to activate a sensory vortex, overturning the vision. The observer loses all dimensional references in favor of an experience that tends towards the abstract and introduces him to a dreamlike universe of symbols, numbers and figures.

We are surrounded by the work, from top to bottom, between sculptures and design objects. In the background, or so it seems, a single vanishing point of color, a pictorial work with futurist features. The artists are always in line on the other side of the “receiver”.

They told me about a wooden table, created to collect thoughts, with a sink drain in the middle. Another work, entitled «Massimi Leggeri», is a tribute to the space and consists of a bowling ball resting on a balance. The romantic component is given by the three holes in the ball, necessary for gripping it, which are the size of the three artists’ fingers.

The painting on the wall, inspired by Cézanne’s «Bathers», is the only two-dimensional object in the space. It is divided into three levels: the beach, the sea and a small arrow – a mouse cursor – which leads back to virtual space. A metal sculpture painted black seems to recall the silhouette of a woman on the telephone.

I said goodbye to Daphne, and I hung up the phone.

In the space that surrounds me, I perceive the mysterious and enigmatic way in which the trio of artists express themselves. The work, detached from them, takes on its own personality, becomes an independent subject with its own breath and life.

It suggests the last piece exhibited: a sort of metal “U” that is contained by the presence of elastic bands. An energetic point ready to explode. An elementary form used by the artists to portray themselves in the present and leave the doors open to new experiments. 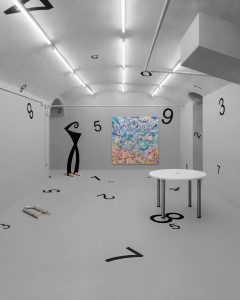 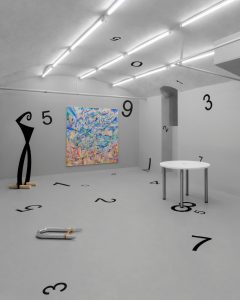