Zeitz Museum of Contemporary Art Africa (Zeitz MOCAA) is a non-profit public institution that collects, preserves, researches and exhibits works by African or diaspora artists; designs and hosts international exhibitions; develops educational and enrichment programs; encourages intercultural understanding and works for cultural promotion also thanks to workshops and residency projects for artists living in Cape Town. When We See Us, A Century of Black Figuration in Painting, the project, inaugurated on November 20, 2022, with the support of the Maison Gucci, is very complex and articulated, given that it presents 200 works by no less than 154 artists. The opening of the exhibition was preceded by a gala evening for a fundraiser in support of the promotional and educational activities of the MOCAA. The exhibition is entirely focused on painting, in particular on works produced by authors starting from the 1920s. 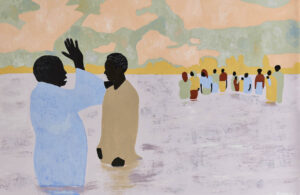 Cassiee Namoda, To Live Long Is To See Much (Ritual Brothers III), 2020, oil on canvas, 152,4 x 233,6 cm. Courtesy of Jorge M. Pérez Collection, Miami © courtesy the artist and Goodman Gallery (from the “Spirituality” section of the exhibition “When They See Us” al MOCAA)

We must immediately say that not all the works (and therefore not all the authors) reach a level of maturity or quality that can allow a dialogue or a comparison with many other international realities, but what matters, obviously, is the effort which underlies the definition of this monumental fresco composed of multiple voices. Of course, from this long list, few are the authors who have already landed on the western market and who can be recognized at a glance (among all we remember the names of Willie Bester, Chris Ofili, Chéri Samba), but many others are worthy of known or, at least, have the right to be able to affirm their poetics as well as their ideological commitment. As Koyo Kouoh, Executive Director and Chief Curator at Zeitz MOCAA says, “over the last decade, figurative painting by Black artists has risen to a new prominence in contemporary art”, which is why a project that has its roots in history with the attempt to connect multiple generations on the various notions of Blackness and Africanity falls at an entirely appropriate time. 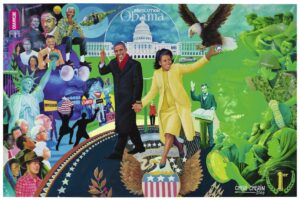 Cheri Cherin, Revolution Obama, 2009, acrylic and oil on canvas, 200 x 300 cm (from the “Triumph and Emancipation” section of the exhibition “When They See Us” al MOCAA)

The project starts from a very complex exhibition, which develops into a catalog (Thames & Hudson publishers) equally rich in information and insights, and then connects to a series of meetings and public dialogues that will explore black self-representation, subjectivities global blacks and black consciousness from pan-African and pan-diasporic perspectives (dialogues and insights that will all be archived on the Museum’s YouTube channel). Furthermore, the project not only wanted to bring together artworks from the last hundred years, by black artists working globally, but wanted to put them in dialogue with the main black thinkers, writers and poets who are active today. 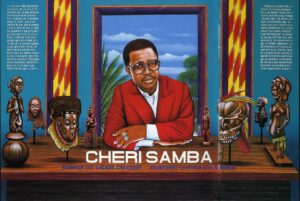 Cheri Samba, Homage aux anciens créteurs, 2000 (signed and dated), acrylic on canvas, 135 x 200 cm, courtesy of MAGNIN-A Gallery, Paris (from the “Triumph and Emancipation” section of the exhibition “When They See Us” al MOCAA)

Furthermore, the exhibition celebrates the way African artists have imagined, commemorated and affirmed African and African-descended experiences while also contributing to the critical discourse on African and Black liberation, and the intellectual and philosophical movements operating in the background. The title of the exhibition is inspired by When They See Us, a television miniseries of only four episodes, dated 2019, signed by the director and screenwriter Ava Marie DuVernay, which focused on the true story of five teenagers from the Harlem neighborhood (New York) wrongly accused of rape and battery against a white woman. The exhibition, shifting the attention from “they” (the others, understood generically as men of power, abusers, manipulators of history and truth) to “we” (the peoples of redemption, in this case the Black peoples , whether these are residents of Africa or are descendants of the diaspora or have simply emigrated to other countries) celebrates the resilience, the essence and the political force of black joy, its roots and its values, all in the vision of a redemption and in the knowledge that the African continent will almost quadruple its population during this century. The exhibition is organized around six themes or sections: The Everyday, Joy and Revelry, Repose, Sensuality, Spirituality, Triumph and Emancipation. 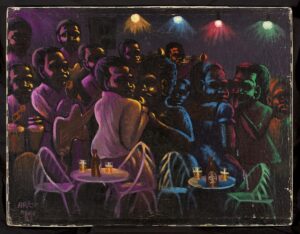 Moké, Kin oyé ou Coulier Madiokoko à Matonga, 1983, oil on canvas, 67 x 87 cm, courtesy of MAGNIN-A Gallery, Paris (from the “Joy and Revelry” section of the exhibition “When They See Us” al MOCAA)

Tandazani Dhlakama, co-curator of the exhibition and assistant curator at Zeitz MOCAA made this statement to us: “When We See Us: A Century of Black Figuration in Painting a comprehensive exploration of Black self-representation through portraiture and figurative painting, is grounded in an in-depth theoretical and historical framework. The exhibition is preceded by a series of critical seminars with leading subject specialists. Figurative painting by Black artists has risen to a new prominence in the contemporary art field over the last decade. This exhibition connects these practices to, and reveals the deeper historic contexts and networks of a complex and underrepresented genealogy stemming from African and Black modernities. The exhibition celebrates Black subjectivity and Black consciousness from inclusive Pan-African and Pan-Diasporic perspectives in works of art produced from the 1920s to the present. It foregrounds how artists from Africa and its diaspora have imagined, positioned, memorialized, and asserted themselves. It demonstrates how multiple generations of such artists have reveled and critically engaged in projecting multiple notions of Blackness and Africanity. We worked on a  hardcover poetic catalogue, edited by Koyo Kouoh. It is richly illustrated with all works selected for the exhibition and includes a contextual essay that I wrote, as well as four specially commissioned texts by acclaimed female writers Ken Bugul (Senegal), Maaza Mengiste (Ethiopia), Robin Coste Lewis (United States) and Bill Kouelany (Republic of Congo). There are short biographies of each artist at the end of the publication. Whilst the exhibition is still on view, and even beyond that, we would like to promote deeper engagement around the artworks and themes of the exhibition. One way we are doing so is through a When We See Us: Webinar Series. Conceived in collaboration with the Institute for Humanities in Africa (HUMA) at the University of Cape Town (UCT), a parallel discursive program provides theoretical framings of the project and is presented as a year-long webinar series”. 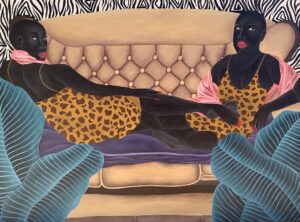 Zandile Tshabalala, Two Reclining Women, 2020, acrylic on canvas, 122 x 91,5 cm, courtesy of Zandile Tshabalala Studio (from the “Repose” section of the exhibition “When They See Us” al MOCAA)