Icons of Light. Bill Viola in ..

Alberto Scodro (Vicenza, 1984) returns to the CAR DRDE gallery in Bologna with the Sunflowers solo show, which brings together a series of works created from 2020 to the present day and inspired by the mythological union between the sun and the flower which, even in the most ancient Greek etymology, draws its name from the fascinating phenomenon of heliotropism. The ideal mentor of the exhibition is the Lombard painter Giancarlo Vitali (Bellano, Lecco, 1929-2018), special guest in the set-up with a painting from 1985, on loan from the ArchiviVitali Foundation, which depicts a sunny summer landscape in which the flowers are deformed due to the heat waves that cross them: the petals curl up on themselves and seem to be about to be reborn like flames and the leaves flicker under the effect of combustion, while in the background you can see the glow of a mysterious crucible. This incandescent atmosphere remains hidden in the installation by Alberto Scodro, who invites the visitor to enter an alienating posthuman countryside dotted with dazzling anomalous sunflowers. The sculptures, placed on minimal bases made of burnt wood lacquered with shellac, are indeed the outcome, alchemically enhanced by the artist’s manipulations, of the process we see taking place in the painting.

The artist’s practice is actually based on the interaction, induced by him, between natural and artificial substances that are solicited through a series of changes of state (physical, mechanical or conceptual) in order to bring to light what is underground and inherent in matter and create composite dynamic systems in close relationship with the environment that welcomes them or that inspired them. Scodro has always associated the fluid state of incandescent materials with the luminous manifestation of all their possibilities and the subsequent solid aggregation with the secret resistance that encodes their potential. Each of his works is the result of a process that upsets the apparent stillness of the initial constituent elements and appears as a temporary aggregation of force and matter that crystallizes a specific and unrepeatable phase of gestation of a form. Scodro’s could be defined as a practice of experimental aesthetic knowledge, which arises from his curiosity to investigate in detail how things are made and then discover which unpredictable material and visual results could originate from forcing their structural limits.

The works on display are also the result of a long process that starts from the earth: the artist plantes sunflowers in the countryside surrounding his studio, cultivates them observing their behavior and growth and then collects and dries them. Each flower is subsequently dismembered to extract the central disk, in turn formed by a set of several small flowers arranged around the center according to the rules of the golden section, or according to a spiral pattern in which the number of hourly and counterclockwise spirals are successive Fibonacci numbers. This distribution shows how the flower builds itself by incorporating its daily movement of rotation into growth, a movement in which we are also immersed without our senses being able to perceive it. Intrigued by this evidence, Alberto Scodro takes to the extreme consequences the intuition that “all things are spiral because we are in rotation like the earth with which we are in solidarity” and builds his sunflowers by assembling together with the wax some rounded hemispheres of different sizes in order to obtain weaves that aspire to a three-dimensional circularity. Each assembly is immersed in plaster and burned so that the original natural material is replaced in the crucible by an incandescent jet of metal which, by cooling down, faithfully retains its shape. This full brass casting is followed by a galvanic micro-casting with 24-karat gold or silver, a technique used in goldsmithing that allows extreme precision in the definition of details and which therefore returns the millimeter undercuts of the inflorescences, emphasizing the refinement of the overall structure.

Each of these devices, like the flower has its essence inscribed in its conformation by solidifying the movement of the earth incorporated into the idea of ​​the sun, re-elaborates these suggestions by incorporating them into that of fusion, which for Scodro seems to coincide with the idea of ​​sculpture itself, and not only in the literal sense of the word. Looking at the sun burns the eyes, but the combustion (materialized in the Sunflowers) is the energetic acceleration which, according to the artist, by allowing us to see beyond what sight would allow us, manages to make us understand the composition of the visible world. Looking into the openings between one inflorescence and another, one can glimpse the charred soul of these integrated and armored creatures, the raf crucible cold but ready to rekindle, in a substantial identity between the matter, the process that galvanizes it and its meaning. The silver specimens, placed in the exhibition space at ceiling level as if to mark a different orbit of rotation compared to the gilded ones, anchored instead to a rarefied and conceptual ground, suggest a lunar origin, while the others seem to have grown under the effect of sun exposure. In both cases cause and effect seem to overlap and the sculptures appear to us as if they were themselves moons and suns. Apparently hieratic and self-sufficient, these complex structures are instead an integral part of a constellation, which as a whole delivers to man a message of twenty words yet to be completed: “The sun is a flowers it turns alone and twirls around. Flowers are… ”, where each word is the specific denomination of one of these mysterious precious planets. 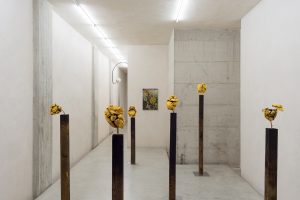 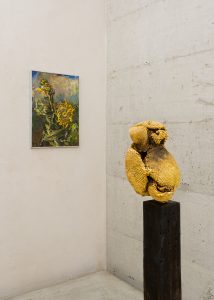 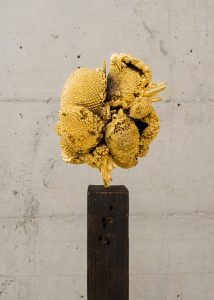