On October 15, 2021 at the Gallery of Modern and Contemporary Art in Bergamo, was inaugurated the second appointment of the multi-year TRILOGY OF MATTER exhibition. After the resounding success of the first BLACK HOLE, ART AND MATERIALITY BETWEEN INFORMED AND INVISIBLE chapter in 2018, and after a pandemic-forced break, the curators Anna Daneri and Lorenzo Giusti present NOTHING IS LOST. ART AND MATTER IN TRANSFORMATION, a sensory combination of aesthetics and science, which develops a reflection on the reality of things and its changes over time. A theme, the combination of art and chemistry, that goes on an absolutely fascinating terrain, apparently dissonant, but that lends itself to being analyzed under many facets, balancing, in a transversal but harmonious dialogue, both disciplines and the works of artists belonging to different periods.

What appears from the work of the curators, in fact, is a well-tarded attempt at sublimation (using a term shared by both subjects), elevating artistic and chemical cultures to actors capable of revealing the material secrets hidden in the natural belly of events since the most remote times of human history and beyond. Truthfully, we mustn’t look with arrogance at neither art nor chemistry, instead we should investigate the origins of both disciplines. This primordial summary can be found in that complex of practical, esoteric and philosophical knowledge called alchemy. Actually, in the course of ancient centuries, the suggestions provided by this sum of knowledge have given birth to studies on the transformation of matter, leading many artists to emulate God through a “power” revealed and given by means of creating something, first mentally and then concretely.

What has just been said can be explained with the analysis of the work chosen by Daneri and Giusti to promote the exhibition: “Etude pour La Naissance de la matière” by Victor Brauner, dated 1940. In this androgynous picture, divided into two halves of masculine and feminine, we see summarized, through the snake that surrounds its flanks (calcing, in some way, Solomon’s Seal of other treatise illustrations), as well as the relationship between the cosmic dimension and the sublunar world, the natural elements of Water, Air, Earth and Fire that contribute to the transformation of the matter in its states and give titles to the sections of the exhibition. The elemental subdivisions evoke, besides the title of the exhibition, Antoine Lavoisier’s quote about the law of mass conservation: “Nothing is created, nothing is destroyed but everything changes”, included in the eighteenth-century elaborate, Traité élémentaire de chimie that marked the interlude between ancient and modern.

And it is due to the French scholar, considered the father of newborn science, the reinterpretation of alchemy, which emphasized that this was not witchcraft, but a more universal form of knowledge that covered both theory and practice up to that point. And perhaps this is precisely the idea, which was welcomed firstly by the curators and then by the artists present at this exhibition: narrating their own concept of the transformation of matter, proving how the broader, contemporary chemistry and scientific theories, are not only occurrences but also sensory experiences. Experiences that also involve humanity and its relationship with the environment around it, like a microcosm that contributes to the transformation of an ever-changing world.

In this regard, since we mentioned the intent of the artists, it is only right to provide some examples, not forgetting the great pillars of the past such as Giorgio De Chirico, Marcel Duchamp, Yves Tanguy, also present at the exhibition. The first that comes to mind is Hans Haacke‘s Large Condensation Cube. The German artist, exploiting the phenomenon of condensation, represents the biological systems of water and air, suggesting a double space dividing the air outside by the one inside the work itself. Worth mentioning is Leonora Carrington’s prestigious oil on canvas entitled Oink, surrounded by a mythological, mysterious and dreamlike halo, typical of the surrealist current to which the artist is an exponent. Elévage de Poussière (photograph by Man Ray) is another work that should be mentioned. It is a photographic shot of the Great Glass (1915-1923) by Marcel Duchamp on which dust has settled, and which the eclectic Dadaist presented, when he first exhibited it, as a mysterious and alchemical landscape.

These just mentioned are just some of the works that the public will be able to see until February 13, 2022, so I invite anyone who visits the exhibition to go there several times, to touch, metaphorically speaking, the transformation of the works on display. 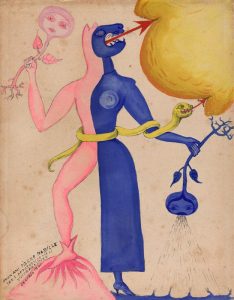 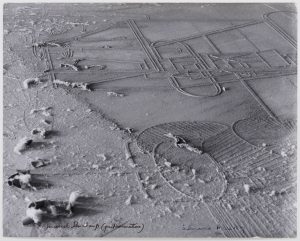