Giorgio Di Noto. Beyond the vi..

“Now you are looking for the secret … but you will not find it,
because in reality you are not really looking.
You don’t want to know. You want to be deceived. “[1]

Over the years the research conducted by the Center for Contemporary Art Casa Masaccio, a project widespread in the urban fabric of San Giovanni Valdarno, has promoted some of the most interesting thematic initiatives of the peninsula counting, on this matter, on very small budgets compared to homologous teams: without pointing the index in order to avoid futile digressions, it is factual to note the good conduct of Casa Masaccio, an investigation supported by acute intuitions and leathery will.

Already an exceptional guest of the Aretina[2] district, Andrea Santarlasci takes the opportunity to wander around the rooms available with an exhibition capable of combining suggestion with philosophical and literary echoes. The solo show In Segreto (Secretly), curated by Saretto Cincinelli, open until March 15, 2020, concentrates the main exhibition core in the three floors of what was once the birthplace of one of the initiators of the Renaissance, however, making use of the double location of Palazzo Corboli, current headquarters of the Municipal Library, for the appropriate underground installation created ad hoc by the artist.

Starting from this work, Our invisible memories (2019), a massive yellowish cube raised from the ground, built with various excavation boxes from which archaeological finds resurface (bones, shards, furnishings, …), a well-defined track is configured in reading the event, full of Dante’s wicked[3]. The anabasic path of the exhibition is not driven by forcing but is inevitable, due to the physical structure of the place and also for the calibrated induction of the setting, capable of increasing voyeuristic desire and of dynamically pushing towards fruition: even the acting performance culminating at the last floor of the building leads the spectators to an unconscious circular motion! This relationship with the public is the strength of Santarlasci’s art, in the wake of a declared appreciation for Heraclitus[4] and the use of extremely romantic archetypes suited to reconciling the current historical moment.

It is necessary to underline the philosophical debt that the research of the author has with the concept of Time, also proposed on this occasion in its precarious, suspended character. The peculiarity of the display rotates precisely on the suspension, adopted with physical or illusory solutions: in the first case, next to the already mentioned Our invisible memories, there is the surprising The other light of the day (2019), a “miraculously” stable acacia trunk on a minimum support capable of projecting a shadow of another shape, while a fragile evanescence is mostly proposed by the photographs On the edge of another threshold (2014) which seem to “lighten” the environment, windowing it, together with the Thauma pieces (2015 ) and Aletheia (2016), visual synthesis of the transmigratory oscillation of all the lexical meanings of Time, from the sublime to eternity[5].

Santarlasci reveals the temporal dimension as a mobile body, only apparently static, whose deformation, or rather oscillation, is synonymous with Beauty as a propagating force derailed by its course: the curator Cincinelli suggests the reading of Derrida[6], of how Time is «out of joint», outside the box, so not revealed and intimately yearned for. The mobility with which one has to face, in the face of an ambition for eternity, is a further key for understanding the exhibition which takes on the author’s intimate and autobiographical value: this is “the place of secrecy”, consciousness of mortality, of duration, in which everything exists and is no longer in the same act.

[2] the group shows Something old, something new, something borrowed, something blue, 1999, curated by Rita Selvaggio and Ripensare il medium: il fantasma del disegno, 2015, curated by Saretto Cincinelli and Cristiana Collu.

[3] In addition to the ascending journey that the exhibition pursues, from the catabase of Our invisible memories on the top floor with the rectified labyrinth, stage of the performance, we can see forms and subjects contemplating a metaphysical plane, in particular, next to The invisible image of places (2019), installed on the wall there is a branch that burns on one side and spreads a light and striped black smoke, it seems to suggest the verses:

[4] It is remarkable that In Segreto creates continuous semantic relationships with philosophical literature, to which Heraclitus, called the “Dark” by ancient thinkers, seems to embody the role of tutelary deity.

[5] Returning to Dante, it is interesting to remember how relevant the concept of Time is in the Divine Comedy, not only in the richness of meanings of the lexeme, but in a real ontological implication, daughter of the Aristotelian and Augustinian debate of its time, summarized, with much approximation, to the contrast between time as movement and as eternity. See E.MOORE, The references to time in the Divine Comedy, Italian translation by Cino Chiarini, Sansoni, Florence, 1900, the entry TEMPO in C. VASOLI, Dante’s Encyclopedia, Florence, 1970 and in Dante’s Vocabulary, edited by Paola Manni and Lino Leonardi, 2015. 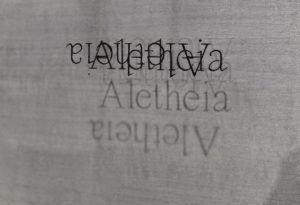 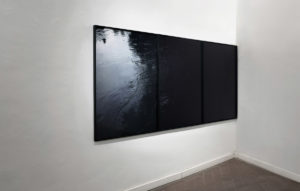