On display at the Loom Gallery in Milan the works of Annamaria Gelmi (Trento, 1943) for the personal exhibition “Caro Spartaco”, open until 11st January 2020. Internationally renowned artist with participation in the Venice Biennale, the Rome International Art Biennale, the Racconigi Sculpture Biennale, with exhibitions in prestigious contexts such as Mart in Rovereto, Museion Bolzano, the Castle of Rivara, Annamaria Gelmi has collaborated in almost fifty years of career with curators and critics of the caliber of Giulio Carlo Argan, Luciano Caramel, Gabriella Belli, Danilo Eccher, Franz Paludetto and many others. Known for iron sculptures and large installations, Gelmi started her research on the border between figurative and abstraction in the early Seventies.

The exhibition at Loom Gallery focuses on these ten years of experimentation with a path that reveals how, through different materials, a single line of research starts from the first plexiglass works and leads to acetates and papers. If later the reference to the figurative is visible in simple elements such as flowers, mountains and crosses, in the Seventies the basic elements of Gelmi’s work were instead squares, circles and their derivatives, rectangles and triangles, arranged and translated into space in different ways in order to recreate three-dimensional and movement effects.

On show there are the plexiglass pieces from which the research on elementary geometric figures started, small moving elements arranged on levels and figures movable in different positions. Within a few years Annamaria Gelmi translates her research from plexiglass to acetates in which the alternately thin or thicker china, drawn straight with millimeter precision, adheres entirely to the surface of the sheet, projecting its shadow on the back. The tendency to search for the third dimension is also evident here in the two-dimensional surface of the acetate, chosen by the artist for its shine and transparency. These characteristics are further highlighted by the choice to position the works at a distance from the wall to recreate shadows and perspective illusions that bring Gelmi’s works closer to contemporary research in optical and kinetic art. In addition to plexiglass and acetates, acrylics on cardboard are also on show, in which a touch of color, albeit slight (gray, dull green or pale yellow) suggests the idea of ​​brightness in a strictly black and white universe.

Annamaria Gelmi’s works present a clever management of space that leaves nothing to chance: precise mathematical formulas establish the relationships between the elements, and axonometry, projections and rotations link the figures to each other creating complex designs from time to time different. In this attention to the calculation and the minutia of the details we see the numerical wisdom of the technical-architectural drawing that Gelmi has taught for 15 years, which, combined with a particular artistic sensitivity, gives lightness to a differently purely mathematical mechanism. And it is thanks to this union that the shadows on the wall create slight hints of spatiality and three-dimensionality, and the double lines used by the surveyors to indicate two joined walls become in her a matter of style, an extreme finesse that breaks the regularity by rhythmizing the sequences in harmonious way.

Highlights of all Gelmi’s work that will return in the years to come, up to the large public installation in porphyry and concrete inaugurated last October in Albiano, in the province of Trento, which proposes the structure of the elements of these years in a monumental version. A clear reference to the profile of the Dolomites to which Annamaria Gelmi has dedicated other works, from “Dolomiti – New York”, exhibition and book created in collaboration with the photographer Luisella Savorelli, up to the canvases of the mountain profiles. 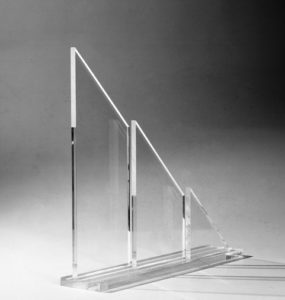 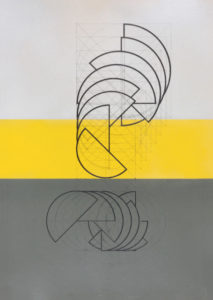