The human being as a work of a..

Antonio Serrapica is a full swing volcano, and if in describing his artistic work we wanted to use a historical category we should say that his body carries the weight of an expressionist disposition. For this author the form is suffocated by the sign, the aggressive instance of his fantasy is expressed first by the color and then by a balanced distribution of weights. Such is the burden of his imagination that if left unbridled this does not respect any rule: he “talks” about everything and in any way, even in a way that does not comply with the rules of bon ton. And beyond any limit, it claims to denounce or highlight problems of a social nature or destruction of the environment around us, a falling environment due to the sordid hands of human choice. All with a sarcastic smile, as an illuminist flogger.

Tell us something about your youth, your beginnings, your training…
After seeing Giorgio de Chirico in a television program painting a picture, I bought tubes of oil paint, and in 1977, after having ridden a motorbike in search of a bit of life, disappointed, I went home to paint my guitar, strangely spending a nice evening. In late January 1979, my left leg was amputated due to a car accident, badly treated in the hospital. Stuck at home for six months of convalescence, I decided to study art history and resumed drawing. Then I learned to walk again with a very heavy Rizzoli prosthesis, later replaced by a lighter one provided by INAIL in Bologna, and to draw from life, using relatives as models, then replaced by photos. In 1980, with the diploma of mechanical industrial expert in my pocket, I enrolled at the Faculty of Letters and Philosophy of the Federico II University of Naples, which I did not attend because I decided to study art, as a self-taught, using the books of the municipal library of Castellammare di Stabia. Among others, I was fascinated by the work of Gino De Dominicis who attempted to make squares by throwing stones into a pond. In 1981 I went to Florence to the Uffizi museum, while with my fiancée, then wife and mother of my children Stefano and Adriano, in Ponte Vecchio, I tried to get some money by selling the self-made handicrafts: earrings, rings, necklaces and masks, made of brass and beaten copper, then exhibited at the Fortezza Da Basso. I also built painted glass and wood screens, which I exhibited in a furniture store in Castellammare di Stabia, La Floridiana by Dino Scote, where I read the art pages of “Domus”, but I did not know that they were curated by Lisa Ponti and Franco Toselli. In 1984 I met Gianfranco Neri (Centro Zero gallery in Pompei), where I made my first solo show entitled “Giornata contadina”. The same year I enrolled in the Institute for art and restoration in Florence, where I lived for two years, graduating in painting and drawing. In 1986 I met Raffaele Formisano, cellist of the San Carlo theater in Naples, also owner of the San Carlo art gallery in via Chiatamone, and so I exhibited my works for the first time in Naples.

When did you meet Franco Toselli and how did your working relationship with this gallery start?
In 1989 I exhibited with Studio Oggetto of Caserta at the Expo Arte in Bari: there I met Franco Toselli, to whom I showed many photos  of my works, which he looked at without saying anything. Then I read an interview by Francesca Alfano Miglietti to the gallery owner Lucio Amelio on “Segno” to which she asked, in the event of a journey through space, which other gallery owner would bring with him, and he replied concisely: “Toselli”. In 1991, in Milan, in a late afternoon I arrived in via del Carmine: the shutter was already lowered, but inside Augusto Brunetti’s paintings were visible. I went in, directly to the office, where Toselli was telephoning: he looked at the canvases I had brought; he bought a job and we said goodbye.

What is “Portofranco” for you and how would you define it?
A mental and poetic port, where you can be yourself.

Which “Portofranco” artists do you feel closest to?
All.

You had problems with your Facebook page… did it seem like a matter of ordinary madness?
The Facebook censors blocked me a month for publishing the video of a girl who poetically walked naked on the street. I think they are foolish, ignorant, very rich, very bad, indifferent, conformist, alienated, disenchanted, incapable of poetry, like the Italian political leaders, commanding assassins, poisoning, polluting, unpunished, because in every place of planet Earth, we eat, drink and breathe plastic 24 hours a day, before going to the afterlife.

Do you have some art projects in progress?
Until June 27, 2020, my solo exhibition entitled “Tra colori e cose” is continuing in Potenza, at the Galleria Memoli. 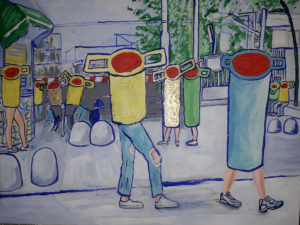 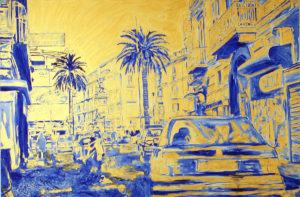 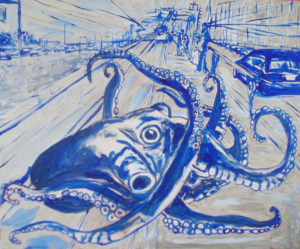 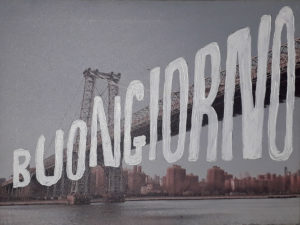