Painting is a blind profession: one does not paint what he sees, but what he feels, what he tells himself about what he has seen. (Pablo Picasso)

The painting of Bahar Binesh (Tehran, 1982), a young Iranian artist already involved in numerous exhibitions in her hometown and abroad, is part of the contemporary art scene as an ideal continuation of Cezanne’s reflection on the relationship between the two-dimensional surface of the canvas and the outside world. Like the French post-impressionist master, her research is oriented towards a synthesis between the external appearance of the world and its rational interpretation, which re-reads every visual data as a succession of forms and space in which the human being is part of an indistinct perceptive continuum like all the other elements that make up reality. If Cezanne always worked from life, with a laborious and thoughtful technique that allowed him to come to a painting that was not the expression of an occasional emotional reaction, but of an attitude of total consciousness in front of the visible, Bahar Binesh arrives at a similar figurative simplification to represent life as a sort of secular liturgy in which every event takes on a ritual value.

The colors, superimposed in an elaborate chromatic texture, build indelible images that translate the mutability of the visible (or the thinkable) into stable pictorial values, without renouncing to transmit vivid sensations. The contour lines, sometimes marked and precise, in some cases tangled and exceeding the edges of the figures, favor the tendency of color to look for the solidity of an image that manages to summarize the optical vision and the consciousness of things. This is why in every work there are various perspective balances that overcome the apparent perceptual inconsistencies of the vision with the coherence of a basic idea that links the differences into a superior harmonic synthesis. The images appear to have been stripped of every accessory and episode, concentrated in a firm and incontrovertible existence, regulated by internal laws that give the subjects depicted a calm, austere and silent greatness.

Abstraction does not want to deny the phenomenal evidence of the perceptible world, but to enrich it with a further depth that detects the emanations of the inner energies of the individual, perceived as a mysterious and indomitable force capable of shaping the surrounding reality. In this way the reduction of the infinite variety of the visible in a narrow and almost archaic range of peremptory signs brings out the subterranean pulsations of the soul of the world of which even the human being is a part, entrusting to the pure expressiveness of color the task of making their presence intelligible. The act of painting then for Bahar Binesh implies the rediscovery of the most ancient and forgotten identity of the human being and of his indissoluble bond with the order of the universe that dominates him and that welcomes him, in the conviction that only this renewed awareness will save him from the alienation of a superficial individualism.

The artist imagines a new world regulated by spontaneous concordances that do not resist the natural transmutation of things, inhabited by a subjective plurality that acts as an integrated unity, as a great organism capable of osmosis and empathy towards its peers and towards other life forms. The intense spirituality of her images makes the dream of this unified positive model immanent, illuminated by the endogenous light of the color that unfolds on the canvas all the evocative and psychic power of its intrinsic beauty. Getting to the essence of the phenomenon is for Bahar Binesh the ideal landing of a path of knowledge and self-awareness in which the viewer is called to accompany her, recognizing the link between his experiences and personal perceptions and what he sees depicted on the canvas.

The scenes most frequently represented by the artist are urban views or domestic interiors framed very closely and characterized by a particular perspective angle that overturns every figurative element in the foreground: this forcing of the natural laws of vision abolishes the hierarchical order of things, like it is reaffirmed by the color distributed as a homogeneous paste that intentionally uniforms the textures that normally differentiate the surfaces of the materials. Even the attribution of colors to the figures and the backgrounds seems to respond to a mixed criterion, which in the same image sometimes privileges a response to the true reduced to the minimum terms that coexists without visual conflicts with details in which the color responds only to the inner perceptions of the artist or the expressiveness of her characters. The protagonists that populate these scenarios are stylized and hieratic human figures engaged in minimal actions or catched in a moment of suspended inactivity.

Their imperturbable and measured presence gives each of their gestures or pauses a supernatural halo, as if the enigmatic episodes depicted were exemplary parables of a new secular animism. The coexistence of details that refer to the contemporary and of figurative allusions to the past place the vision outside of a precise epochal connotation, as if the dense time of the images wanted to condense past and present in a superior synthesis that makes its duration eternal.

In this way, Bahar Binesh takes Cezannian synthesis to its extreme consequences and translates into an image an exemplary moment that encompasses a multiplicity of temporary moments purged of contingencies, often including in her visions the image of an apple that functions simultaneously as a tribute to her ideal mentor and as a signal to the spectator who will be able to grasp its implicit interpretative suggestion. 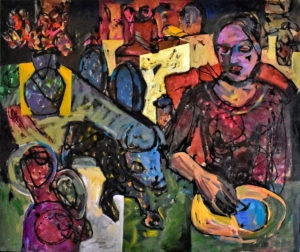 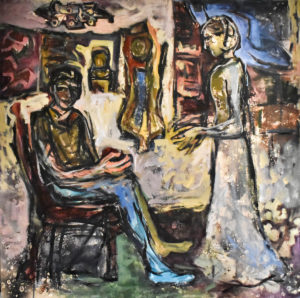 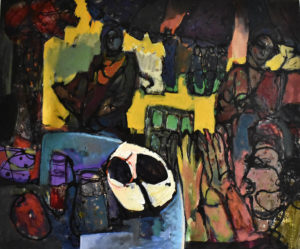 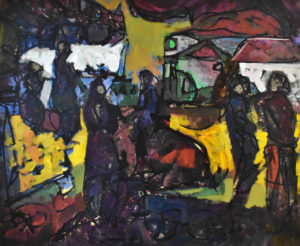