Tales from the soil: Dineo Ses..

One of the most iconic interviews[1] from the last century stars Bruce Lee at the height of his film career. There is no need to remind those of my generation who Lee is, but for today’s young people you just need to know that Bruce Lee is the father of that film genre that cleared martial arts in Hollywood, and consequently throughout the world. west even before Jackie Chan.

But Lee was not only an actor, he was also a martial arts master and, as such, he had his own philosophy of life that he often drew from his martial discipline, namely Jeet Kune Do. But let’s go back to this interview, where Lee precisely says that one of the greatest lessons he has learned in life is “to behave as if you were water”. He explains to his interlocutor that water is calm, but it can be devastating, it can become cold and hot and can break any type of material over time. Being water is a form of resilience and from this point of view time is an advantage and not a disadvantage: those who resist will have the best of everything, just like water.

The exhibition Be Water, my friend, which you can visit until 23 December 2022 at the Venetian headquarters of the Alberta Pane Gallery, was born from this iconic phrase by Lee. On display you will find works by six international artists: Luciana Lamothe, Jojo Gronostay, Eva L’Hoest, David Horvitz, Nicola Pecoraro and Enrique Ramírez, who tell, the idea of fluidity.

In Luciana Lamothe‘s work Plan the dynamics of the wood fibers of a scaffold unusually hanging on the wall, flexed under the action of gravity, become sensitive when we bend in our turn in an attempt to decipher a project (plan) that is always indeterminate, nothing but a potential.Suspended through space like drops of water, the glass ampoules of Duchampian memory, created by David Horvitz, flew over the ocean to reach Venice and bring you the air of Los Angeles (Air de L.A.), in which black particles are suspended like an infra-mince, a “sub-thin” between the wood and the fire that released them into the air. In the film Pareidolia by Eva L’Hoest, the gaze of the camera expands and contracts on a moving threshold, stretched between the water and the rocky, mineral and inorganic landscape of a desert island made up of volcanic material and pink granite. Figures appear as images without being and a sense is created contingently, with nothing preceding it.

An ambiguity of matter and weight characterizes Nicola Pecoraro‘s sculptures, whose substance looks like an unknown metal from a distant space, a planet or its reverse, in which every material is denser, without a name. It is a visual and semantic ambivalence that characterizes La Gravedad by Enrique Ramírez, in which entities float like thrown bodies and wandering ideas, which advance and recede not unlike the images of Blanchiment’s lithographs, in the game between the image, stone, water and sand. Jojo Gronostay‘s sculptures (Kreaturen. V Forest), created from perfume bottles, inhabit such a cosmos as shifters or creatures in between, like a fluctuation of meaning between the representation of otherness and a newly invented form.

Acting as relational tensions, the works on display are like water, which is formless until it understands, and becomes, the relationship towards which it tends. Be water my friends, be water. 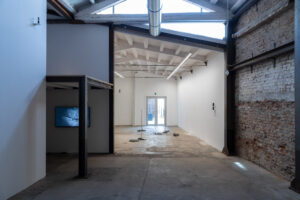 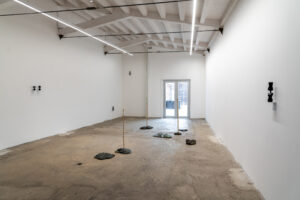 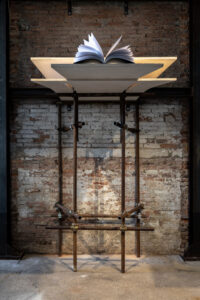