Italy and Armenia between Atri..

Beatrice Gallori at the MARCA Museum with her pers...

Reflection on the development ..

The MARCA Museum in Catanzaro proposes an exhibition that reflects on the aesthetic dimension of matter, the complex concept of metamorphosis and the iridescent fixity of the artworks. These two terms place themselves into conflict, but it is precisely on this clash, that Beatrice Gallori’s work is based: immobility and dynamism, fluidity and vigor, extreme brilliance and roughness. The artist, expanding her research beyond painting and canvas, seeks to bring out the hidden side of matter, which in many cases is transformed even into three-dimensional forms.

Under the curatorship of Luca Beatrice, Gallori’s solo exhibition, CODEX, is configured as a succession of forms and colors that, nevertheless, coexist harmoniously and explicate, without intermediation, the artist’s style. Color, matter and texture: these are the main lines of research on which Gallori invests.

The colors, which often are monochromatic, combine with the different materials and supports which, in turn, form the skin and body of the artwork. And so, a seemingly aniconic vision dwells on the mutation of cells and their anatomy. The very colorful works, almost all unpublished, master the white rooms of the museum and allow for a relationship absolved of any path, thus exclusive for each viewer. This time, Gallori has decided to work with new supports, such as steel, let us think, for example, of the installation BIO_sphere: a complex interplay of solids and voids, light forms that seem to float in the air.

The artist’s interesting ability to know how to show what subsists behind and within matter, using different media as a means of investigating life itself, attracts and amazes at every gaze, forcing overbearingly to observe over and over again, and to do it so close to the artworks that one can smell them and can perceive the new grooves and shapes, changing and perhaps unrepeatable details. A close-up view of a microscopic dimension (cells precisely) that has here the capacity to become macroscopic. Gallori translates such a rich and complex world into essential and pure forms that however explode into a blatant and irrepressible expressive force. The artist captures the immaterial dynamism by translating it into a visible agreement among the disparate surfaces, which seem to overlap and chase each other, forcing us to detach ourselves from the idea of the physicality of the artwork and pushing us toward the awareness that art is essentially immaterial experience.

In some of the artworks in the exhibition, such as Meta, matter overflows from the confines of the support and visibly explodes into space. In others, such as Versus, the more restrained elegance of the material, not dissimilarly, communicates all its power. Here space assumes a preponderant role in the construction and perception of the artwork itself: it is not only configured as an implicit subtle balance in it, but also as an element inseparable from the fruition. The works are in the space and they acquire it becoming another dimension into the same.

Now, why does an artist direct her research toward cellular forms, thus referring to a scientific aspect? I am not able to answer this question, but I ask: aren’t cells the principle, or the “codex”, thus life itself and everything that composes it? 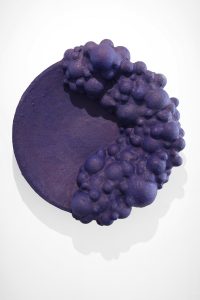 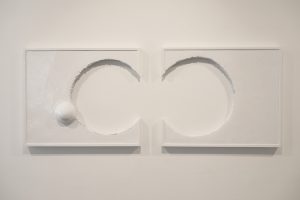