Holobiont Rhapsody, where the ..

As usual, the rodolphe janssen gallery in Brussels (rue de Livourne 32) proposes a double solo show in its beautiful and clear rooms: Genesis Belanger with “The Party’s Over” and Sanam Khatibi with “Cyanide”.

We focus on this second artist (born in Iran in 1979, lives in Brussels) for the particularity of her pictorial genesis and because she boasts a very respectable curriculum, having recently held personal exhibitions at Kunsthal Gent, at PPOW in New York and at BPS22 of Charleroi.

The dominant theme of the work of Sanam Khatibi is the lost paradise, this Eden of which after the fall (original sin or other) we have forgotten the sound of the waters, the luxuriant nature, the peace of the senses, the harmonious coexistence between the various living being. And a loss soon becomes nostalgia, and a nefarious prophecy of everyday life or, to put it another way, reflection on the transience of life, on those aspects of pleasure that soon becomes pain and suffering. A theme that authors of the past dealt with in the cycles of the Triumph of death and vanitas or still lifes where the accumulation of objects worthy of admiration already have the seed of their end in them: a cut flower is destined to wither and a fruit ripe is destined to rot. Beauty, therefore, not as an anchor of salvation, but as a philosophical transit towards higher and less transient values.

The theme of vanitas (which has inspired introspective painters from Mannerism onwards) leads back to the Latin phrase “Vanitas vanitatum et omnia vanitas”, but the phrase actually is a linguistic cast taken from the Hebrew “havel havalim”, that is from the biblical book of Ecclesiastes, where the sage, after having explored every aspect of material life, comes to the conclusion that everything is vanity. The theme is so powerful and pervasive that we find it, with the most disparate nuances, scattered among the lines of the highest literature: from Boccaccio to Petrarch, from Ariosto to Leopardi, up to Johann Wolfgang von Goethe who dedicated the poem “Vanitas, Vanitatum Vanitas” to him.

Now, with the exhibition “Cyanide” the artist returns to this theme, proposing twenty-one small-format tablets on the theme of still life and the “negative” thought behind so much apparent exuberance. Here, then, painting expresses an evident desire to appear that is linked to the best Flemish tradition: the so-called still life combined with forms of life (insects or small reptiles), precisely to increase the contrast between being and appearing. Of course, if I have to think of an early form of still life (still devoid of philosophies and negative thoughts) enlivened by contrast by the animal acting on the scene of the representation, the philological path takes me back to the classical age and in particular to the mosaic of “Cat biting a partridge”: a superb example of a genus that has since undergone the developments we know.

However, in Khatibi, the vase of flowers, which accompanies a collection of shells or a human skull or insects and small reptiles, does not bring us back to a philological or archaeological path: a closer examination reveals the impossibility that these painted objects come from a distant past or from the same historical period, since a heterogeneity of material and manufacture brings them back to the present time and to a substantial geographical diversity from which they come. The presence of these objects, therefore, roots the theme of vanitas within a double perspective, a temporal cone that goes in two directions: one towards the past, the other towards the present. Within these scenographic compositions, the bodies and objects can be reorganized indefinitely. And Khatibi’s painting works precisely in this sense: persevering in the organization of convincing and plausible iconographic systems. 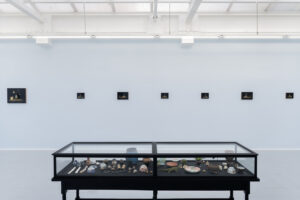 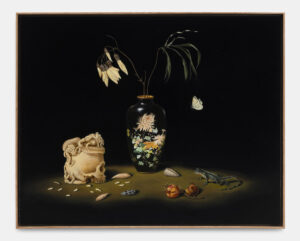 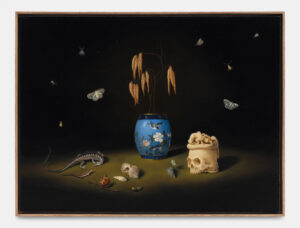 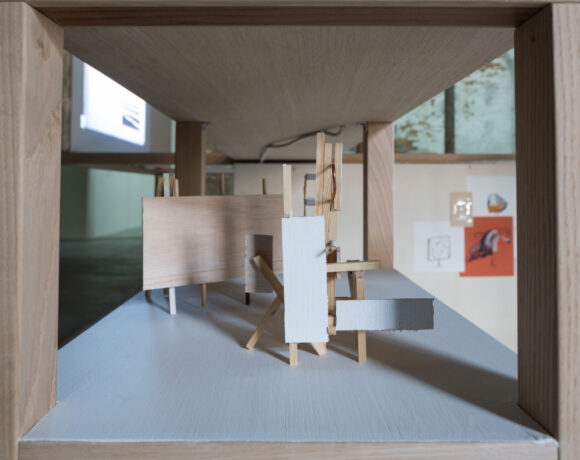 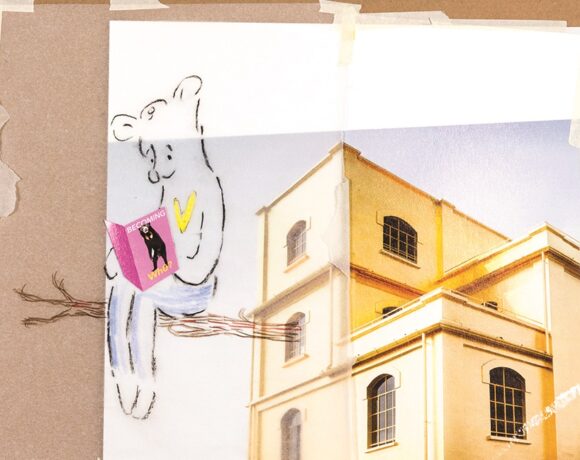 The fantastic world of Who the Bær. The search for an authentic self