The exhibition Nature in motion brings to Palazzo Litta 15 sculptures realized by Bia Doria with woods coming from Brazilian forests with sustainable management. Inspired by the movement that she observes in the nature and in the curves of the tree branches, the artist gives a second life to the wood that would be destined to reject shaping new contemporary forms in dialogue with the baroque curves of the building that welcomes them. Resident in São Paulo, Bia Doria has repeatedly ventured into the Amazon Forest to look for logs recovered from fires, areas of deforestation, river funds and dams to raise international awareness on the topic of environmental protection and ecological disasters to which brings its excessive exploitation. Her works, in which the raw material is identified with the subject of the work, proposes a positive model of symbiosis and balance between humanity and nature. On the occasion of her personal exhibition in Milan, we interviewed her to deepen the background of her work.

Wooden sculpture is often seen as a purely male activity. How did you approach this discipline and why did you choose it as your main expressive vehicle?

I was born in the south of Brazil where the forests of araucaria were once abundant, then for a long time they suffered from deforestation. So art is for me an intuition that comes from the disgust I felt in seeing deforestation during my childhood. I saw the deforestation of Santa Catarina [province in the south of Brazil] where at that time cutting down the trees was necessary to delimit the lands. I saw large and ancient araucaria trees being killed and burned, which disturbed me a lot. Over time, I began to unite the nuisance for the felling of trees and the term “sustainability” and I began to put my ideas into practice through the sculptures. I collected residues of abandoned wood and began to process my works.

During your travels in search of wood you went to wild areas not frequented by man. What sensations are you inspired by immersion in untouched nature?

Going out in search of the raw material for my work gave me the opportunity to know fascinating places in Brazil, where I was able to know not only the fauna and the flora but, mainly, the people who live in the most distant places from the big urban centers. In these untouchable places we perceive how important it is to preserve and protect nature. And create peace and harmony between humanity and the forest.

Your sculptures are made of a living material, in constant settlement and change. What care do they need to last over time?

The older wood is better, in my conception. The only care my sculptures need is to avoid leaving them outdoors, under the sun or rain.

The forms you create combine a marked biomorphic suggestion with an elegant linear abstraction. How do your interior visions interact with the shapes of the raw wooden fragments?

Raw, natural wood is already fascinating in itself. The curves of my works are representations of the movements existing in nature and are born from the observation of the movement of men in the branches of the trees.

Is there anything in particular that binds you to Italy?

My distant roots are Italian and I think that from here come strength, perseverance and my predisposition for change and creation. 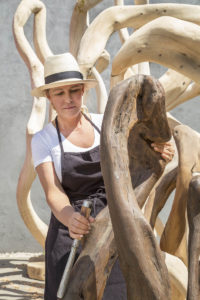 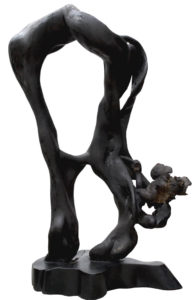