BienNoLo. Being within the experience

BienNoLo. Being within the experience

Who would have thought that the neighborhood between Via Padova and the Central Station would one day become known as NoLo (North of Loreto), but above all, who would have said that the Giovanni Cova panettone factory, a stone’s throw from Viale Monza and forgotten for years, would have hosted some of the most sought-after events in the city: Fashion Week, Fuorisalone, and now also BienNoLo, the first edition of the Milan art biennial curated by Carlo Vanoni, ArtCityLab (Rossana Ciocca and Gianni Romano) and Matteo Bergamini.

The theme of this biennial, which ended on May 26th, was ecological sustainability, together with that of transience, passage, site specificity, environment. In other words, the attempt to rewrite the urban and natural landscape in a no longer anthropocentric but biocentric way. And the former factory has lent itself well to this purpose because the highly connoted nature of its spaces, the empty and unoccupied rooms of a disused laboratory, has forced first of all to look around, to let emerge the material conditions of a place in which the spontaneous vegetation is the only one to have maintained its exercise, despite the disaffection of human activity.

The choice of electing natural light as the protagonist of the lighting of the works, thus avoiding the use of electricity, has helped the artists to move in an anti-monumental and anti-decorative direction, not necessarily operating in a defined space but to fit into the interstices and textures of the old panettonificio, using the space directly as the physical means of the work.

Adrian Paci, for example, invited the visitor to sit in front of a plant and stare at it, leaving things to happen: the noises, the silence, the passage of the sun, the rain. The installation consisted of a long iron tube that rose from the floor in an orbital shape, until it surrounded the plant as if to protect it. Not far away, the intervention of Mario Airò: three sea shells resting on a hook protruding from the wall, in dialogue with an old sign that invited to “keep clean”. The staging, in both cases, of an essential and intimate gesture, which momentarily kept human expertise and the vitality of nature in balance.

Francesca Marconi was also ready to communicate immediately with all forms of life, including plants and animals. The performer who wore her work, a sort of cloak or camouflage blanket, has become pure nature, pure instinct, in full continuity with the surrounding landscape.

Also from a blanket, but now one of the isothermal ones used by those awaiting rescue, was the installation by Riccardo Gusmaroli. With a constellation of holes that recalled the image of a starry sky, the work presented itself as an invitation to look beyond, in not only spatial but also metaphorical terms.

In general one would say that the goal of all thirty-seven artists invited to BienNoLo was to make the condition of being inside a place and not far away, of making the presence, giving an account of the essential fact that the world does not stand before to us but around us.

And each of them did it by making existing space and light talk each other: that is, showing off not only the art work but also the material and not abstract presence of what preceded and framed it: the depth of spaces, wall textures, light conditions, spontaneous vegetation.

Things that we always see but to which we pay no attention. All this without seductive details or detailed descriptions. Leaving, so to speak, the free look to wander and be amazed. 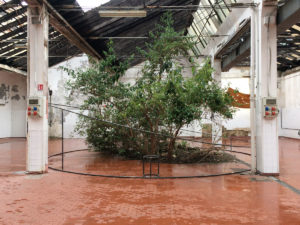 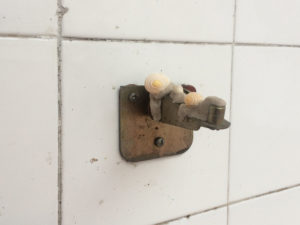 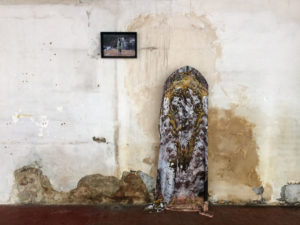 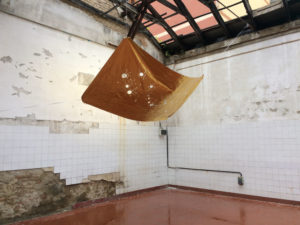