Bjarne Melgaard is a particularly prolific and undoubtedly unusual author. His work is combined with pictorial, plastic, installation, literary, architectural tools, to the point of touching the angular aspects of video productions and augmented reality. A mixture of linguistic signs leads him to involve other collaborators in his interdisciplinary projects.

Now, for the exhibition “Elisabeth and Me”, at Ropac gallery, in Paris, the author has worked on small canvases which were then received on specially designed backgrounds to involve them within an continuum site-specific and very effective expressive installation. This exhibition arose from the particular interest that the author had for the American writer and journalist Elizabeth Wurtzel (l967 – 2020) and in particular for her book “Prozac Nation: Young and Depressed in America: A Memoir” (published in 1994 and where the battle against depression is told firsthand). This, then, is the thematic center of the exhibition: two people who have never met (and one of the two, the writer, has recently died) connect and communicate through words and images. Here, in summary, what the author says, in motivating his choice: “In these difficult times, when blocks and isolation are such a new part of our common experience, Elisabeth seems the best of her companions”.

Melgaard’s creative, enveloping and engaging practice is aware of the minimal terms of human nature, of its weaknesses and of its most unexpected and surprising aspects, made not only of ruinous falls, of dark and painful sides, but also of possible ascents ( or rebirths). Investigating, sharing and embracing Elizabeth Wurtzel’s witty and painful self-scrutiny and her dystopian worldview have guided Melgaard into the heart of this series of expressive and brightly colored canvases, as if a distant dialogue could become a life experience and daily therapy. These canvases are populated by hybrid characters (humans and animals, similar to cats or dogs), with evident gender connotations, but also with caricatured traits or expressive exultation that could connect to multiple matrices: from the most exacerbated Munch (that of drama and anguish that emerge from the depths of the soul) to the most unbridled and impulsive Picasso.

Melgaard’s typical (quick and incisive) brushstrokes indicate a need to express oneself without restrictions, to capture the fleeting moment of the here and now. In contrast to her joyful colors, the paintings echo the darkness and pain that we can find in Wurtzel’s texts, and which become particularly poignant in light of the current global socio-psychological crisis brought about by the Covid-19 epidemic again in progress. Commenting on the diptych entitled “Dog / Cat Walk” which pairs two of his semi-comic characters, Melgaard says that the work personifies our current life experiences, while “we step on our own daily drama”. Painting smaller formats for this Parisian exhibition allowed Melgaard to engage in a more intimate and psychological dialogue with Elizabeth Wurtzel. Of course, it is a projective dialogue: Melgaard sees reality in his own way, transfigures it, takes possession of it and after having digested it, proposes it to us in another light.

However, in a stratified comparison between cultures, between a background flow of images, in a dull and indistinct buzz, and the elevation to a symbol of some of these, these canvases, almost in an overlap between high culture and low culture, rest on three different wallpapers created by Martin Kvamme and produced by Rolf Hoff and the Signex AS company, which have substantially transformed the gallery spaces into a continuous backdrop, in a sort of graphic loop. In this way, Melgaard’s expressionist works were mixed with psychedelic memories, cinematic flows, generational icons (such as Lydia Lunch or Heather Locklear) and a set of quotations from “Prozac Nation”, as if the sign painted on the canvas by the artist entered like a can opener in what we can define the compendium of the world (or of that slice of the world that is going to be represented). Yet I don’t think we should speak of a clash of cultures (the high one against the low one), but rather of a meeting of several linguistic signals, in a completely authentic and desired creative encroachment of great expressive effectiveness. 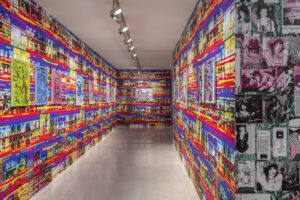 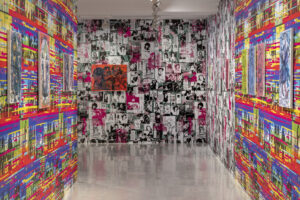 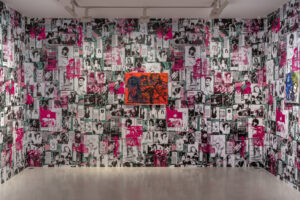 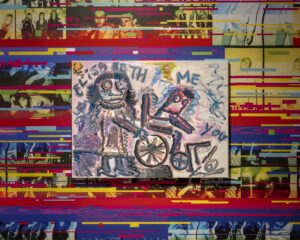