It is the story of a myth, a legend ready to be handed down from generation to generation, a sophisticated and changing phoenix, ready every time to rise from its ashes to reinvent itself once again, like an echo, a whisper between cement and silk.

Metamorphosis and catharsis, is what has accumulated two crazy and completely anomalous souls, out of the ordinary, from the common, from every consideration. To the limits of a geography without guidelines.

The ONO contemporary art in collaboration with the Duffy archive offers an overview of the relationship between David Bowie and Brian Duffy, through 25 photographs not included in the exhibition “David Bowie Is”, thus representing an Italian exclusivity for the gallery.

Brian Duffy was one of the most famous photographers of the much regretted “Swinging London” with important collaborations, from “Harper’s Bazaar”, “British Vogue” and “Elle France”, Duffy knew how to mix photography, life, and life with ‘art, so much so that the study that opened in the house where he lived with his family has hosted imaginative personalities of the sixties, from Michael Caine to William Borroughs, between scandals and celebrities.

The collaboration with Bowie began in 1972, in the highlight of the artist’s career, and saw its end around 1980. Both possess great talent capable of giving life to the most eccentric imagination, both with a rare aesthetic sensibility, both capable of making iconic and immortal visual details of the history of music; starting from lightning.

The lightning busted on Bowie’s androgynous and alien face would have marked multitudes of fans. Alladin Sane has thus become a milestone in the history of cover art. Bowie, always attracted by the inspiration of another great artist like Elvis, right from the latter he looted (if you can say so) the symbol of lightning.

Elvis was the creator of a secret society, “Templars of the Christian brotherhood” that fought against racism and anti-Semitism, later abbreviated to the acronym TCB “taking care of business” with attached lightning. The personal brand Presley was then reread and re-mixed with Alladin Sane. On the day of the photo session with Bowie, Duffy took from the kitchen an old rice cooker that he had given him as a mother, produced by National Panasonic and had a small logo with a flash of red and blue. When two genes make up for it, the rest is history. Duffy completed Bowie to perfection, and so came the trick for Alladin Sane, with the addition of the airbrushed water emblem on the clavicle. Surrealism, emotionality and sexuality, sublimated on a symbolic level, other. High.

From the words of Celia Philo contained in the exhibition catalog published in collaboration with LullaBit:

“If I had to split the credit for that image, I’d have to say fifty percent of David and fifty of Duffy, Pierre and mine, I think it would be a fair assessment, it could never have happened to anyone else, I feel very privileged to have worked together with Duffy and David Bowie, to quote Duffy: talking about a creative session is like talking about a boxing match, and that’s how it was because that night there was a bit of magic in the room. : “It’s a fantastic cover, fuck.”

According to his son Chris, “Duffy was a complex character in many respects, a Marxist anarchist.” The most emblematic example was undoubtedly that in which he tried to burn all his negatives. Fortunately, the record of the work done survived, but Duffy after the next decade at sixty understood that something was changing, the power of the photographers seemed scepter to the banality of the commercial empire and the quality left far, so he decided to abandon the photograph to resume it thirty years later. 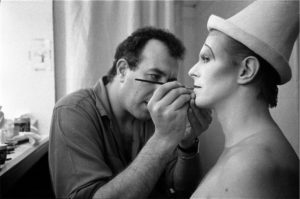 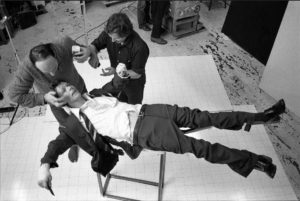 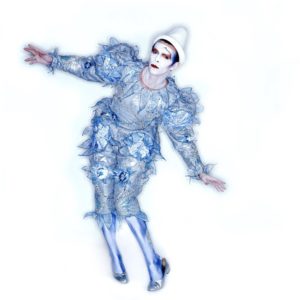 But only a rebellious soul could understand the needs of a man fallen to earth by fate, free from space.

So not only the music, but also the cinema began to peep into the life of the photographer: Brian Duffy, was invited by Sunday Times art director Michael Rand on the set of “The man who fell on earth”. In this catalog, George Perry remembers Bowie’s vision: “My impression on David Bowie was … first of all it was out of the ordinary beauty, with those hairs of an intense orange, the very pale face and those perturbing eyes. ” …. “It came to think:” Jesus, who the hell is this? “He had a mind-blowing presence, and to say that he came from a public middle school south of the Thames!”

Contrary to what was called Duffy, and that is not a compulsive photographer, his son Chris remembers that the many rolls found by “The man who fell on earth” show the exact opposite. Duffy used to bring along a singular machine, his favorite for personal shots, a Canon Dial that worked with 35mm film, a half frame, able to make seventy-two shots. Shots that have returned an image of Bowie, timeless, other, ethereal, nebulous, eternal. A mythical body, suspended and trapped in the film, wrapped in the night, deeper than a forbidden place, celebrated by a cloak of fine and pale sand, as if the myth spread in micro particles before us. Energy condensed in millimeter space.

In 1979, on the eve of Lodger’s release, Bowie again chose Duffy to make the cover. The session took place in the studio of the photographer, who had previously built a platform suspended between the beams of his studio to photograph from a height of nine meters. The effect of the face, deformed by thin strands of nylon, combined with the recovery from above, made Bowie appear to be in free fall. And Bowie, was truly an artist in free fall, free from all sorts of constraint, obedient only to the unstoppable creative flow to which he was so erotically bound.

Scary Monster, 1980, was the last service that Duffy created for Bowie. This time, however, on the set there was also the artist Edward Bell (who Brian had presented to David): the session began and from that shooting was born the cover album of Scary Monster that the famous Ashes to Ashes. This occasion marks the last definitive collaboration between Duffy and Bowie, perhaps due to the fact that, for Scary Monster, at the end the Bell cover was printed.

A personal one, full of background, that wants to retrace the close relationship between great artists like David Bowie and Brian Duffy, and that is configured as the last stage of a project to rediscover the artist’s images that ONO started in 2012 precisely with the Duffy archive.

I like to think of both artists as two “citizens of transcendence”, John Berger in his “To present himself to the appointment – narrating the images” has taken up a question that Federico Fellini posed at the time, and that is worth reporting: “What is an artist? A provincial who is somewhere halfway between physical reality and metaphysical reality. At this metaphysical reality we are all provincials. Who are the true citizens of the transcendence?, The Saints. The artist’s reign is this ‘in the middle’ that I call the province, this frontier country between tangible world and intangible world. “

It is therefore inevitable to present yourself to this appointment with the images of one of the greatest artists of our century, capable of embracing timelessly an idea of ​​absolute prismatism.