Camera tripla brings together, at the LABS gallery in Bologna, the voices of three young artists, Marco Emmanuele, Luca Grechi and Mattia Sugamiele, with a dialogue that questions painting, albeit with different declinations and attitudes.

Leonardo Regano, curator of the exhibition, writes: «The three artists were chosen precisely because of the differences and the peculiarities of their research that, despite the diversity of languages, create a sort of correspondence and homogeneity in their overall vision».

The exhibition is conceived as a field free from the historical heritage of painting, describing constellations of abstract insights that address the discourse on the medium with freshness and novelty. In a hyperconnected era, in which our imagination is unconsciously shaped and influenced by countless images from the media and the internet, the three artists courageously support painting as a contemporary visual stimulus. The reference index for the pictorial composition is not provided by nature or by forms already known, recognizable and comforting to the eye of the observer, but open new worlds, inner universes and reflection on the human condition. In the works on display the figure sometimes disappears and sometimes emerges as mentioned, abstraction materializes in suspended reality and by means of a use of light protagonist and detector.

Marco Emmanuele (Catania, 1986) works with flat backgrounds, consisting of small fragments of glass and glue paste. The light is reflected in the pigments and illuminates the material and dreamlike landscapes, which are always new. Emmanuel’s methodology recalls the making of an archaeologist, with the collection and recovery of small debris from the territories, which are used as pigments on the canvas. The material becomes a witness of the passage of time and the mutations of the earth due to the intervention of man.

Luca Grechi (Grosseto, 1985) proposes works with chromatic fields in shades of blue, revealing a special relationship with the veils of sky and water, elements always in progress, such as the artist’s painting. Sometimes in this abyss we can see slight vegetal hints, even if they remain sparse, just mentioned and detached from a distinct figure. Grechi builds a fluid landscape, inhabited by changing metamorphoses and paths in forests of veiled signs.

Mattia Sugamiele (Erice, 1984) paints on hybrid surfaces, between painting and the digital world. The works on canvas stratify digital figures, along with the juxtaposition of the oil color worked with the airbrush, with the result of a surface on which appear undefined territories, archipelagos and terrestrial crusts that emerge and become synthetic worlds. His work, moreover, comes out of the two-dimensional nature of the canvas, comparing intermittent works of videos, photographs and sculptures. Sugamiele’s research establishes an uninhibited dialogue with the digital technology of the Zero years, researching the possibility of its form and its tangible universe. 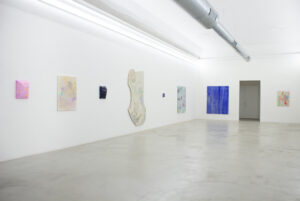 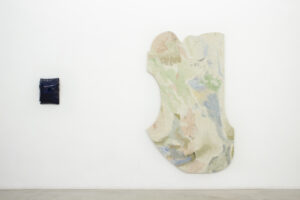 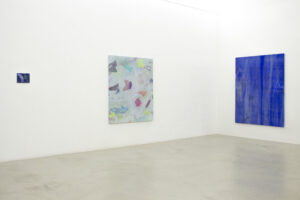