Paolo Ciregia. God is dead but..

We talk about those years and the aesthetics that are widespread in the territory with Carlo Fontana, an author that participated in the group of Ambulants.

What was your training?
I studied at the Academy of Fine Arts in Naples, in the school of Domenico Spinosa, a painter of informal ancestry, from which I have not so much struggled to free myself, because I must say that in spite of his artistic convictions he was a very liberal teacher.

Can you tell us about the Naples of the 70s?
The Naples of the Seventies had a face very different from that of today, with a historical center put back in order, with a formal law and order and with a flow of tourists at that time unimaginable. The so called Spanish quarters and the districts of ​​Montesanto, Forcella and Duchesca were areas that could also be dangerous: now the danger has not died out, the Camorra continues to dominate, but the dirt and the “disorder” have moved away from the center. Moreover in those years there was still the theater of dramatized, where the tear-jerking stories were recited, for the streets of the centre it was still seen to turn the “pazzariello” (a sort of joker) and in the district Sanità the “pettenessa” (a sort of hair dresser) could be met that coiled the hair of the old women in the middle of the alleys. These notes of color (which we find below in many Totò movies) have really disappeared. The political climate was very tense, the contrasts were very strong, the extremist fringes of the fascists against the extra-parliamentary left then led to the armed struggle and everyone remembers the crime of Aldo Moro who was a culmination of that fierce antagonism and a immediate moment of redemption by the institutions. The art galleries, which served as a point of reference for contemporary art, for a city so disastrous yet artistically very lively, were numerous: first of all, the Morra Studio and the Modern Art Agency of Lucio Amelio, then Lia Rumma, Framart, Studio Trisorio and Il Centro; but there was no lack of cinema of essai (like the Cineteca Altro and the Cinema No) and the underground theaters. In short, there was a unique cultural ferment: everything was heatedly discussed and the paths open to linguistic experimentation were innumerable.

Moreover you have had some experiences with Leo De Bernardinis’ theater and you have also had contacts with Lucio Amelio… can you tell us something?
I frequented Leo and Perla during the years of their activity in Marigliano and when they occupied the theater of Salerno, realizing on their request some happenings during the opening times of the theater. Instead, Lucio Amelio first came to my studio in 1975 because at that time I had started working on color as an intellectual recovery and this possible sense of “chromatic dirtiness” caught his attention. Although ours was a completely marginal relationship, with the generosity that distinguished him, Lucio bought me some works and some of them even exhibited at Art Basel.

In those years, what was your approach to the world of art?
I followed the exhibitions of the galleries I mentioned earlier and followed the meetings and debates that regularly took place in the city. Nicola Spinosa, superintendent in Campania since 1984, I believe he was the first in Italy to open the city’s historic spaces to the contemporary. I remember that the Capodimonte Museum opened its doors not only to Burri’s “cretto”, but also to De Dominicis and Mimmo Jodice, while in the 1970s Villa Pignatelli housed an exhibition behind the other, with a wide-ranging activity. In more recent years, Piazza Plebiscito has come with mega-installations (for example with works of Kounellis and Paladino) and the Archaeological Museum become point of reference for international events. We must also remember that the exhibition “Terrae Motus”, very strongly wanted by Lucio Amelio, as a symbol of redemption of the city, as a cultural response to the disastrous earthquake of 1980, is then over guest at the Palazzo Reale of Caserta. When today in Italy some politicians talk about this confrontation between modern and ancient, I feel like smiling: everything was already there, everything was already marked in the history of a city full of problems, but also full of life, creativity and imagination.

In those years, your position was very politicized: can you tell us in which group you have take part for your political struggle? Furthermore, in the discussions that you have participated with the group of Ambulants do you remember any particular topic?
I played with Lotta Continua in the Bagnoli district and later with unorganized Autonomia Operaia, because these two political movements were for non-violent social change. For example, to combine the political struggle with the aesthetic story in the 1970s, I often went to Italsider-type factories with a red ball of string trying to create a zig-zag path in order to imprison the workers near the factory gates, to force them into dialogue and interaction. Even in discussions with the group of Ambulants I have always wanted to touch on a political aspect that gave voice to the underclass. For example, the culture subordinated to the bourgeois élite, according to the lesson of Luigi Maria Lombardi Satriani, was that which derived from folklore as an original and authentic lineage, so I have always tried to overturn the consolidated positions bringing in my work aspects of Neapolitanism.

When was the group of Ambulants born and what were the reasons for that birth?
Officially the group was founded in 1975, but my first adhesion was entirely political and unofficial: at the X Quadriennale I took part illegally by occupying with a square drawn a part of the space assigned to the group, which also gave me the consent to the action, but obviously my name in the catalog does not appear.

Can you give us a testimony of your participation in the Biennale 76, Padiglione Italia, in “Ambiente come sociale” section, signed by Enrico Crispolti?
Enrico Crispolti was a politically placed critic on the left and anti-system, let’s also say anti-market. His figure has had great importance precisely because of the desire not to exercise power over artists with selections driven by money, in the search for a new social dimension of art, an inclusive and democratic dimension. The book published by De Donato was a perfect testimony of his ideas. Certainly, many of his choices were not acceptable to me and many of the artists he supported seemed to me to be linked to a production anchored to the monumental idea of ​​the monument (or anti-monument but conceived in the shape of three-dimensional sculpture), while the work of the Ambulants floated towards the idea of ​​the happening and the aesthetic gesture in motion. In the first seven days of the Biennale opening, together with the group of Ambulants (I remember the presence of Marta Alleonato, Ernesto Jannini, Annamaria Iodice, Claudio Massini, and the last-minute arrival of Giuseppe Zevola), some “walks” in the Biennale Gardens and in the city. The experience was very lively and interesting, precisely because of the dialogue that took place not only with citizenship, but also with the works of the other artists who exhibited there. Of course, the answers we had obtained in the poor neighborhoods of Naples with the distribution of our aesthetic signs on the territory, a land where people are more open and cordial, were warmer than those we found in Venice, but the city already suffered from era of invasive tourism that distorted any neighborhood, even the most peripheral. On that occasion, I played the figure of the colorful water seller (which I had already completed for the Bagnoli walk): I approached people and donated drops of color embodied by small mosaic tiles.

“Ambiente come sociale” (environment as a social), how did you mean it, how do you define it?
In the Seventies I saw the art market as a closed, stale and elitist system, while the territory with all its aspects of marginalized and primary creativity seemed to me a path that could be practiced in parallel, according aesthetic and  political languages.

1975-2019: can we find a link between your work then and today?
There is a common thread, although some may believe that my dedication to painting today is a betrayal. The red thread is the color that I have always used and to which I have dedicated myself, as to an epiphanic song, as a gift that man cannot do without. Blindness is a condition related to loss; the absence of color from everyday life would be a privation. Color surrounds us, in nature, in changing seasons and even in the perimeter of a canvas. 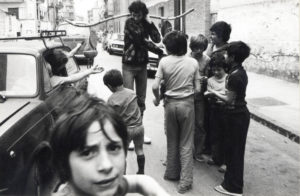 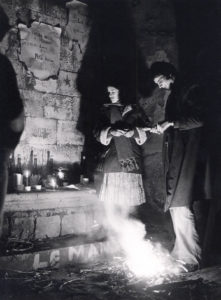 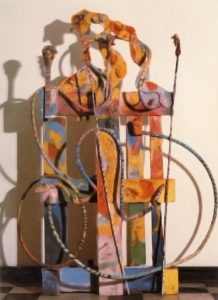 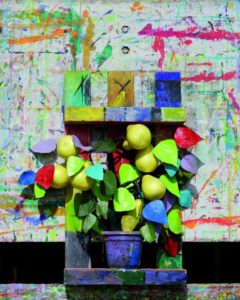 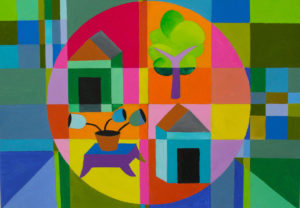