The one American, the other European. The one has been exhibiting for over twenty years, the other is a newcomer. The one chooses the medium-large format, the other rather the microscopic. The one passes from the pin-ups to Donald, the other captures rural glimpses that could be inhabited by Lilliputians. If a sound metaphor could be associated with both, one would be noise, the other a whisper in a low voice. They are Ryan Mendoza and Albert Samson, painters, protagonists of a double solo show on display at the Minini gallery in Brescia until 31 July 2020.

Mendoza (New York, 1971), multifaceted and itinerant personality, currently residing between Berlin and Sicily after several wandering in the old continent and a fifteen-year stay in Naples, shows up again with this 9 / NEIN, inspired by the nine muses and that “no” that his German wife Fabia started to repeat to him often. And in fact there is a family air, first of all in the layout. Two by two, the paintings are hung on wallpaper backgrounds, vaguely vintage, reminiscent of grandmothers’ houses and Sunday lunches. But even more there is an air of marital squabbles. The pairs of paintings are pairs of subjects sui generis, bizarre, which dialogue with each other. There is always a figure of a woman – the housewife, the winking girl – who matches an animal, a male partner borrowed from Disney’s animated cartoons. The result is a game of domestic sketches, pleased and amused in their absurdity, parodies of a cartoon America, stereotyped, made of consumption, popcorn, Hollywood myths and advertising. This ranges from Tippete, who looks perplexed at the respective housewife intent on preparing a roast, up to the bourgeois lady who is blatantly tossed a cake in the face. Ringing irreverence and dystopian infantilism. Voila, the show is served.

The rooms dedicated to the second author are quite different. From the imaginary stars and stripes of Mendoza, you suddenly find yourself in a calm, calm dimension, which takes you back to an ancient, almost nineteenth-century Europe, where time seems to pass slowly. Samson (Castellamare di Stabia, 1976) is here at his first solo show. Of Italian and Dutch origins, he has been painting for ten years and his paintings strike at first sight for a specific reason: that they are very small. Like tiny windows that open here and there on the gallery walls, they frame fields, farmhouses, Morandi-style still lifes and occasional metropolitan fragments – including a Milanese glimpse of the Pirellone. The brush stroke is soft, welcoming, the pasty colors. With wise and non-trivial simplicity, the author evokes and reassures, bringing to the canvas common objects that have both the vagueness and the precision of memories.

These two exhibitions so far apart in terms of styles, contents and geographical references speak with different accents but the language remains the same, figurative painting. Contemporary, however. Taking on everything that painting and, in general, making art today involves. Open horizons of meaning, contradict, indicate spaces now suspended now dynamic, serious and playful, distant and close, always poised between what appears obvious and what is not at all. The antipodes on which Mendoza and Samson travel are an excellent pretext for appreciating their mutual originality: you just have to follow them and wish you a pleasant journey. 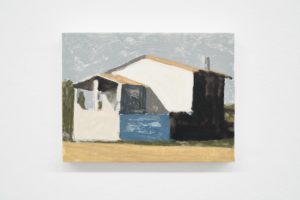