Jason Dodge at Macro in Rome: ..

Cecilia Mentasti (1993) is a visual artist and art-worker. She studied Painting at the Academy of Fine Arts of Brera and since 2019 is co-founder of BRACE BRACE. Her research focuses on marginalized elements within various reference systems – most often of art – with a focus on the relationship between rules and curation. Her artistic practice is complemented by research and in-depth work at institutional venues such as the Centre For Films and Ethics at Queen Mary University of London (2018). Recent exhibitions include the solo show have you ever been / where you already are?//. at BRACE BRACE and Safari (not the exception but the rule) for Video Sound Art 2021 at the Museum of Natural History in Milan.

Edoardo Durante: I would like to begin this conversation by asking you about how you started the Protect What You Love series….
Cecilia Mentasti: I’ve always been interested in the issue of conservation. The first crates I built had been designed for Maria Cristina Galli and Maurizio Arcangeli’s artworks, who have also been my teachers during my studies at the Art Academy. In this series of artworks, there is also an autobiographical element since in the last years I’ve been working mainly in the background of the art world and crates have always grabbed my attention for their latent crafty artistry. I am interested in how they are both displays and objects aimed at something, at the same time.

With Waiting for the Miraculous is there any change, however?
With Waiting for the Miraculous I built a crate for an artwork that is deeply important for me: In search of the miraculous (1974), a performance by the Dutch artist Bas Jan Ader. He disappeared during this last work, while he was crossing the Atlantic Ocean with a small sailing boat, trying to come back “home” from the US where he was living. The natural consequence is a thought on conservation and care of a non-physical object, such as performance; the first thing I asked myself was: how can I crate a performance?

With another performance?
Exactly.

And did you make it?
Yes, I did. The action itself was quite simple: I looked at the sea since my glaze couldn’t withstand it any longer. Waiting for the Miraculous, indeed, which is also the title of my work, is a mirror of Bas Jan Ader’s artwork that also has the characteristics of a reflection on waiting for something impossible to happen. At exactly  the moment I looked away, the performance was done for the day. I tried to overcome the most that I could, but usually my limit is set between 5 and 7 hours per day.

The idea of imagination has certain importance also in the artwork called The Whale…
Yes. I asked myself which were the founding but invisible elements of an artwork and, of course, I started to think about imagination. I tried to make it the subject of the artwork and not just a phase of the process. The artwork is called The Whale and it is an imaginative 27 metres long whale. It may seem odd, but to imagine something that big isn’t as simple as you could think and I had to train myself. I started to build imaginative references in reality, all 27 meters of lengths, in order to help me to imagine: I used several methods such as parked cars, a measuring tape on an iced lake, the white line of a soccer playground. Next month, I am going to exhibit this work with 6 cars parked in a medieval square in Piacenza. I am fascinated by the idea of bringing the public to a collective exercise of imagination: everybody can imagine one’s own Whale, transforming it into a participative performance.

Could you tell me something about your evacuation maps? Also in this case there is the element of the relationship with the public, when it realizes that the evacuation plan is not working…
When I am invited into a group exhibition, I hybridize the exhibition map with one of my evacuation maps in which I also try to interact with other artists’ artworks. I try to make them a step to safety even though my maps sometimes are not properly “working”. The theme of the evacuation plan is something really intriguing for me and, in the last years, has taken several shapes in my practice, becoming more a family of artworks, all of them with the title Ovunque ma non qui. As you say, the relationship with the public is the main theme of this work, also because it inevitably takes the spectator to consider the possibility of an atypical path of behavior inside the art space.

So, if for this work you started from other people’s artworks, is it true that you conceived your intervention a few seconds before the opening?
Exactly. Everything running at the last second, always. (she laughs) I am interested in taking something that already exists and transforming it, slightly moving its meaning. One of the reasons for which I am interested in safety maps, is that inside museums those are framed drawings: they have what it takes to be artworks, but they are not. My practice is often aimed to do this minimum move and change a pre-existing condition. When I did Waiting for the Miraculous, for most of the people, I was just a woman looking at the sea, such as Bas Jan Ader was just a man on a sailing boat in the Ocean. I am not interested in the final result, I like to think that my work isn’t so recognizable.

I don’t completely agree… It isn’t that clear, to me, the issue of conservation. From the moment in which you put an artwork inside one of your crates, has this become a new installation?
Not exactly. The crates are themselves, artworks. Alone they aren’t working. I build them with my hands, one by one.

I imagine working in your studio is important to you…
Yes, a lot. I enjoy the dimension of the studio, even though sometimes I just stay there, doing nothing.

Can you tell us something about the Protect What You Love series?
About this idea of studio practice, for example. I need to build the crates as functional, at the beginning. Then I permit myself to add something that talks about a deep relationship with the artworks they take care of, a love story between those two halves. Then the crate is a present for the artist – always someone with whom I have a strong relation – that can decide what to do about the crate.  For example, when I did a crate for At the end of the day, honey and milk by Francesca Finotti, an artwork depicting some goats through the filter of a contact lens, I used sound-absorbing material, isolating the imaginary sound of their bleating.

With Francesca Finotti and Francesco Paleari, you started BRACE BRACE. How has this happened?
Randomly I guess. We just needed a place to work and to think.

But it is an exhibition space.
Yes. Later we realized that the space was stunning and we felt the need of doing the first exhibition, which was by Francesca Finotti. We had fun and now it is almost a project space, with a bigger team with also Flavia Albu, Elisa Di Nofa, Simone S. Melis. We work with artists we are interested in, also to deepen their practice. It is a continuous exchange that helps us to stay independent and no-profit since we can support wide different projects with a freedom that succeeds economic interests.

On November 19th your solo exhibition 18 artworks that couldn’t fit in a window, curated by co-atto, opened. Would you tell me more about it?
Sure. 18 artworks that couldn’t fit in a window is a project that I thought about for the spaces of co_atto long before it existed. co_atto is composed of 18 windows in a large corridor of Porta Garibaldi’s railway in Milan and the exhibition space fascinated me from the beginning because I realized that many of my works could not fit in there. Then co_atto was born and someone, I guess Vincenzo Argentieri with whom I shared the idea at the time, told them about the project. The idea from which I started was very simple: to imagine artworks that were too big to fit in the window and that, therefore, had to be cut and modified in order to enter the exhibition space. For this project I invited 12 artists to lend me works that were too big to fit in the window, on which I intervened in different ways during some performances.

I was particularly surprised by the action of cutting for exhibition purposes. Would you like to talk to me about this by exploring the concept of conflictual curation?
In order to understand the question of conflictual care, I believe that a pivotal element is the photographic documentation of the project, made by Carlos Manuel Gasparotto, one of the few people present at the performances. Through his gaze it emerges how my attitude is liminal between a radical action such as intervening on the work and the dialogue between me and the work, the search for the best way to carry out this intervention. The result are very intimate images, from which emerges a form of extreme care but which interests me very much. I believe that in the end the work is composed of this double essence: the documentation of the cut and the cut work, which finally enters the showcase, allowing a very deep relationship of exchange between me and the work to emerge. Cutting the works was a very strong experience, both from an emotional and physical point of view. 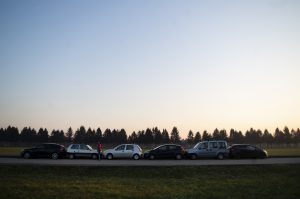 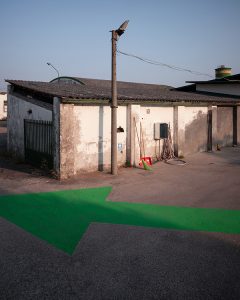 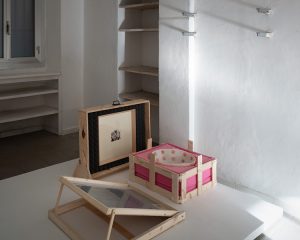 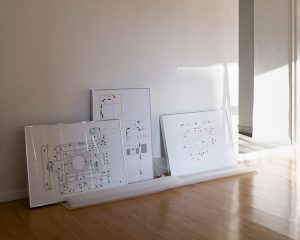 Cecilia Mentasti, Ovunque ma non qui, 2021, installation view per have you ever been/ where you already are?//. at BRACE BRACE, Milano, photographic credits Francesco Paleari, courtesy BRACE BRACE 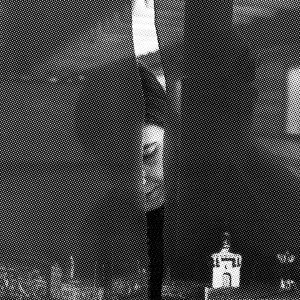 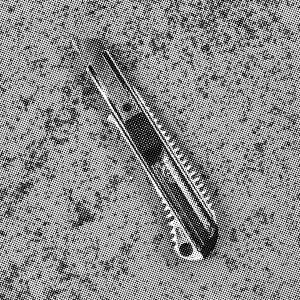