Lilac. The manifesto of domest..

What will become of this consumer society? Rubble and industrial wrecks seem to characterize the despotic future imagined by Chen Zhen, a Chinese artist to whom the Hangar Bicocca is dedicating a major retrospective until 21 February 2021. The Short-circuits exhibition presents twenty-four installations scattered along the space of the aisles, taking us on an unprecedented journey between tradition, contemporaneity and reflection on the future.

Key word to approach Chen Zhen’s work is “transexperience”: a term coined by himself that indicates a set of experiences lived when one leaves his native land to travel to other places. In the artist’s works, the transnational experience is embodied in the desire to combine Eastern tradition with Western aesthetics, thus presenting works in which reflection on contemporary society rests on the solid roots of the past. But it also opens up to another important notion: art is that quid through which East and West mix.

Chen Zhen is a veteran of the Chinese Cultural Revolution, promoted by the communist dictator Mao Zedong from 1966 to 1976. The decade sees art exclusively engaged in the celebration of politics and the Chinese state, setting in motion a great form of propaganda, aimed at exalting the figure of Mao who rejected the idea of ​​an art as an end in itself. At his death, with the opening of the world towards the current era of globalization, Chinese art underwent a real world spread: thanks to avant-garde artists who demonstrate an excellent mastery of contemporary techniques and media, has currently invaded the art market. With these premises, we can better read the work of Chen Zhen: an art that speaks to us of a constellation of social aspects but which does not lack self-reference.

Many installations presented at the Hangar reflect the artist’s autobiographical experiences. In 1996 – on his return to Shanghai – he finds himself observing women cleaning urinals at dawn. This image brings to mind moments from his childhood and in particular the school experience: the journey to school with the background sounds of the chamber pots, and then the collective reading of Mao’s Little Red Book. Thus he realizes Daily Incantations (1966): 101 chamber pots are installed on an imposing wooden semicircle structure that recalls the bianzhong – a Chinese musical instrument. At the center of the structure we have a sphere made up of metal bars, electrical cables and various pieces of electronic devices. The installation is noisy: Chen Zhen tried to reproduce that sound of chamber pots, objects so in contrast with contemporary life and – perhaps – destined to fall into disuse, also becoming relics or monuments. The work opens up a strong reflection on Chinese society, split between the desire to renew itself and chase a consumerist lifestyle, and the constant presence of a tradition, linked to Buddhism, which proposes emancipation from material goods and from which it struggles to detach. The same contradiction emerges in the work Fu Dao / Fu Dao, Upside-down Buddha / Arrival at Good Fortune (1997): a metal structure about 3 meters high with thick bamboo branches recalls a Buddhist temple from which hang everyday objects related to the consumer society.

But above all the beds are the furnishings that come back most, linking his research to the sphere of intimacy and human relationships. La Voce du sommier – Sleeping Tao (1992) is an installation consisting of three beds that refer to the kang, a traditional oven bed from northern China whose surface is heated with coal. The heads are three light boxes on which we seem to glimpse a rocky landscape, but which in reality are piles of waste. Here too we have references to tradition, in particular to the three phases of Taoism reported on the light boxes, but with a critique of contemporaneity. The beds contain objects that are now unusable, alluding to both the presence and absence of man. Also inaccessible are the objects submerged by the beds, which have become fountains, of the Jardin-Lavoir (2000): a meditative garden recreated at the end of the path, which suggests a process of purification from the material aspects of life.

The retrospective highlights above all the heterogeneity of Chen Zhen’s work: the themes and forms are repeated, giving life to a unified narrative. The installations, monumental, involve the viewer: they are synaesthetic, noisy, they invite to be touched. The vision of the world in which we are immersed to suffer from the last decades of the 1900s presents itself as a strong criticism of the consumerism of global society. This is a short circuit: the voltage at the sides can assume a value equal to zero, but the passing through current generates situations of high voltage. But, in the end, the artist seems to suggest, there is always hope. 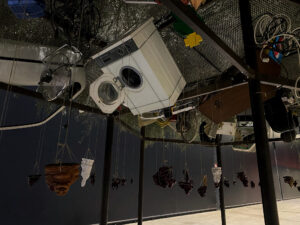 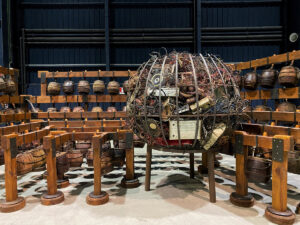 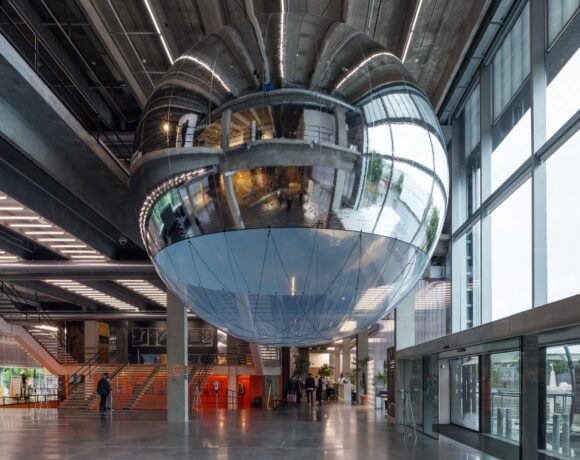