Lida Goldoust. Nature as a sen..

My Monkey Editions. An indepen..

The Fuori (Outside) exhibition at the Rome Quadriennale was only open for a few days at Palazzo delle Esposizioni due to the restrictions imposed by the pandemic. While waiting to be able to access the museum spaces again, we met Chiara Camoni, one of the 43 artists invited by the curators Sarah Cosulich and Stefano Collicelli Cagol, and we asked her to tell us about her project.

“We have chosen to exhibit two representative works, Kabira (2019) and Unitled (A tent), 2019, which are both recent works although not specifically created for the Quadrennial in Rome. Untitled (2019) is a brass structure, a curtain that hosts a group of silks impressed with a vegetable technique. For me, these silks are like shrouds because the leaves, the flowers and the herbs I use do not leave an imprint through the addition of color but they deposit their own juices into the fabric, resulting as a direct imprint of vegetable elements. Through this process, anthropomorphic figures emerge. They are like strange characters or sprites as I define them such as emanations of a specific place. For the work conceived for the Quadrennial, the vegetables I used were collected in my garden and in the surrounding woods. Therefore, they are emanations of a landscape as if looking for the presence of a specific place. This methodology has been re-elaborated and re-proposed in workshops I conducted in specific places. In the last case for example, I hold a collective workshop at the GAM in Turin. We participants went to the confluence of the Po and the Doria Riparia rivers, looking for the figures hidden in that place. For me, it’s all very magical, it is related to wonder. It all begins with the collection of the materials and then, we found flowers that were not found the previous year. In this sense, this is a space that is already known and connotated. It is not a neutral place, but a familiar one. It all continues by arranging the flower leaves only on one half of the fabric. In fact, as you can see from the work, the figures are vaguely specular, and I mean vaguely because the leaves do not exactly leave the same imprint on both sides of the silk. The eye knows symmetry but this is not an exact symmetry – in fact, symmetry reminds to the image of the body. On the contrary, from this process, bizarre forms emerge and they are tendentially abstract. Once a shape is given to the eye, we look for another, perhaps one has arms, others have protuberances. It all relates to the ancient tradition of natural plant dyeing although the way I work is more casual. For me, everything has a value event what it does not work because in that space there is a void and shapes are determined by what appears, leaving a negative imprint. For me, when the fabrics are opened, this is when the wonder happens, even for myself who made them and I think this is the engine of my practice. Then, these figures are positioned and organized in a circle and become a sculpture, a place and a space that can be seen from the outside but that also can be entered. The figures make a playful ring like a sabbath wherein one can find him/herself. This is a practice that has been consolidated over the years and is enriched by the presence and relationship with the people I encounter in my work. In this stage, the work becomes signed by me and by the participants, testifying that specific place and situation.

Kabira is also a piece conceived as a choral work, the result of a workshop carried out at the Carlo Zauli Museum in Faenza over a summer in 2009. In this specific case, there was no precise idea but I have proposed some elements related to the idea of ​​difficulty. The horse was a pretext. In particular, I referred to an existing horse, one of my horses called Kabira, an animal that I made me in the position of confronting myself with the idea of difficulty because of the relationship I was aiming to establish with him, something that I could not completely control. In contemporary art, the image of the horse is also understood as a taboo because it can make us think of the kitsch or an idea of ​​a monument that perhaps is outdated. Starting from this unconventional subject, we opened a discussion on the idea of ​​a monument today, something that this work aimed to achieve to some extent. For me, this work has something monumental in its dimensions. Another element is related to the fact that we used a Belgium black soil that Carlo Zauli used in the 1980s which was located in the museum’s basement. We went down into these dungeons that had no light and each one of us extracted a piece of clay. In this sense, it was like a descent into a chthonic world to look for a material still formless. Another element I addressed was some readings as I often propose in my workshops. In this case, I introduced The Ignorant Schoolmaster (1987) by Jacques Ranciere which narrates the case of a teacher who teaches a language he does not know and it happens that students learn from him. In fact, when I propose a workshop, I always ask myself what can be taught or if there are any concepts or methods that can shape an idea. Therefore, on the one hand, it arose a prolific debate with the participants whilst on the other hand, we had the practice, the work that started from life drawing, literally we went out to draw horses and then we started modeling shapes in very simple forms that allowed the hands to work while thinking. For me, there is a reasoning plan that occurs when the brain is engaged in something as if you can think more freely and that is when it is possible to reach a level of intimacy. I would like to add another element by quoting the philosopher Chiara Zamboni who teaches at the University of Verona and whose work has been object of our readings recently. There is a space that is created between people which is a third thing, an unconscious space like a third element. This way of thinking in the presence of the other is something special, a specific thing which is different from when you are thinking in solitude. Kabira managed to keep all these different levels of difficulty and beauty together. The horse took shape in this figure which is also a place because inside it has an empty space which is like a tent and a hiding place.

Untitled and Kabira are two works that have undergone an important process. They have reached a form which is in itself a resolved and self-sufficient form. A good premise is not enough to do an artwork because sometimes the artwork also demands for something else that is given by its self-sufficiency which lends to an idea of the post, something that occurs later. You can enter the tent, you can use it as well as the horse goes for a ride and get embellished by new necklaces and flowers every time it is presented, a bit like in certain religious situations there is a progressive accumulation. In this case, at the Quadriennal, the horse on display is dressed in dried flowers like certain ancient walls of the Roman ruins that one can encounters in that city from time to time. In these two works, the curators have identified two lines of my work that deal with a female approach and presence and with that something that recall is the incommensurable, something of the work that is not easily circumscribable, but is linked to a gender tradition. These two works speak of an ambiguity, a dimension that can be partly controlled and partly not and therefore the work, at some point, manifests itself by its own will, I would say.” 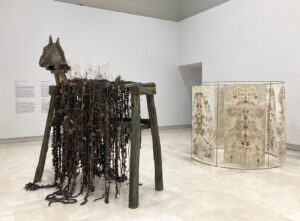 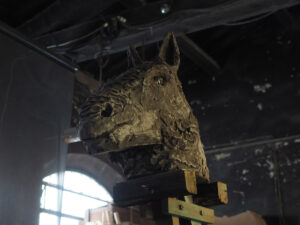 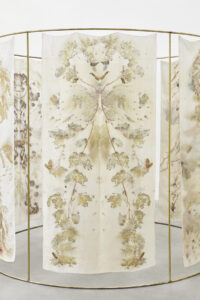 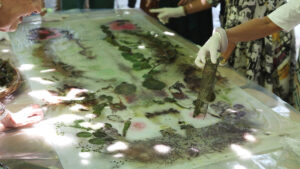