Cinzia Ruggeri at MACRO in Rome with the retrospec...

In conversation with Gian Mari..

From 14th April to 28th August 2022, MACRO, in Rome, in the Via Nizza venue, presents the first major exhibition entirely dedicated to the multifaceted figure of Cinzia Ruggeri, who, from the Sixties, has moved chameleonically among the boundaries of fashion, design, sculpture, installation and architecture. In 2020 the Palazzo delle Esposizioni had honored her setting up her works in a room on the occasion of the 17th Quadriennale d’Arte, now, just three years after her death, happened in 2019, “Cinzia says…” is part of the dense schedule of the Azienda Speciale Palaexpo, this is the title of the anthological exhibition created for the SOLO\MULTI section, which tries to restore to the public the complexity of an artist that is still too little investigated.

Cinzia Ruggeri has made her artistic research a tool for inquiring the functional and semantic properties of the object and the architectural and social dimension of the body, according to an original and nonconformist perspective enriched by irony and oneirism. Milanese by birth, but of Central European origins on his mother’s side, Ruggeri made her debut at the age of eighteen with a personal painting set up at the Galleria del Prisma (presented from the 16th to the 31st December 1960) in via Brera and she began her studies at the Academy of Applied Arts in Milan attending courses in drawing, graphics and photography. Her career began as a stylist: after a first contact with haute couture in Paris thanks to an internship at the Carven atelier, she rejoined the family business in the mid-Sixties, from which she left only in 1972, when she became sole director of the clothing company Bloom spa, in which she is remembered for promoting the use of linen as a material for the production of clothing. That of fashion is a parable that ends in the Nineties with the arrival in the world of design, however her style will find such critical success to be compared to the experimentations on textiles conducted in the Bauhaus laboratory.

Eccentricity, irreverence and elegance are the terms that can describe the most of her marked and distinguishable stylistic code, contextually inserted in that process of reinterpreting the artistic avant-gardes that in the Seventies helped to define the heterogeneous profile of the Postmodern. Thus, in close ideological proximity to groups, such as Alchimia and Memphis, her creative formula travels hand in hand with the experience of Radical design, in turn attenuated by a perspective based on the concepts of the everyday life and the banal, faced with a fitting and adherent approach to the aesthetics of surrealism.

“Cinzia says…”, as the beginning of the piece Elettrochoc by Matia Bazar group says, with whom she had a long and profitable collaboration taking care of the clothes, is conceived as a single immersive installation that is tinged with soft pink tones and that traces the dreamlike and metaphysical nature of Ruggeri’s work. The focus of the exhibition, of which the Maison Gucci is the main sponsor, is the selection of over 150 garments and accessories belonging to the Bloom collections, Cinzia Ruggeri and Cinzio Ruggeri, restored and exhibited for the first time after their launch on the catwalk in the Seventies and Eighties and organized according to thematic nuclei that trace the collaborations with Valeria Magli, Occhiomagico and Studio Alchimia. Of these garments, many of which suspended in mid-air in an imaginative and visionary setting, we can mention the kinetic dresses with LED lights that light up with a gesture or the delicate and light Ziggurat evening dress, so called because it is openly inspired by Mesopotamian buildings with a typical stepped structure, which finds a refined correspondence with the “towers” placed along the hall of the museum that allow the spectator to be able to observe the exhibition path from a new point of view. The collection of the exhibited works also highlights several distinctive traits of the artist, including the constant references to animals, such as dogs or chickens, or the interest in food and its rituals, which emerge strongly and equally from the design of objects to the reconstruction of environmental projects.

After animating the spaces of MACRO, the exhibition will arrive in London in October 2022, where it will be hosted at the Goldsmiths Centre for Contemporary Art, with the hope of stimulating a reflection and a review of Ruggeri’s work in an increasingly Italian fashion system internationally consolidated. 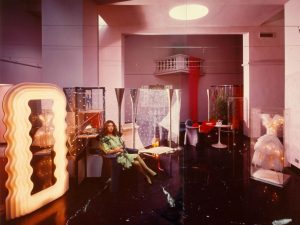 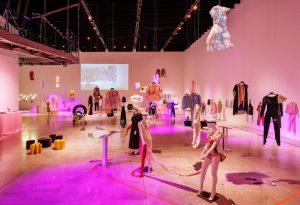 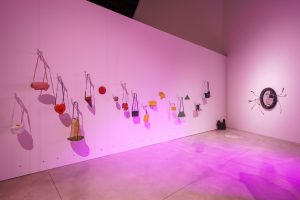 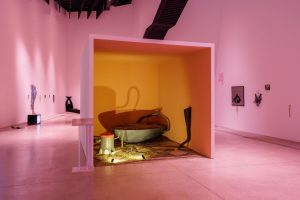