The "Last Judgment" over Beiji..

“Vulva, vulvar, narrative complex, the woman’s external genital organ. Vagina that, in the “vulgar”, is said “fica”, “gnocca”, “passera”, “mona”, “berta”. The aristocratic “flower of flesh” and “Origin of the world” (Courbet) are dedicated to vulvocracy “. With these words Concetto Pozzati (Vo ‘di Padova, 1935 – Bologna, 2017), used to accompany his artistic production to flows of thought that managed to be cultured, lucidly critical and visionary at the same time, presented his latest pictorial cycle, painted between 2015 and 2016 and never landed before in any exhibition space. The Vulv’are exhibition at GALLLERIAPIÙ is centered on this series and is organized in collaboration with Archivio Concetto Pozzati, a cultural association created in Bologna in 2020 by the artist’s family members with the aim of collecting all the documentation on his activity, protecting his work, promoting research and disseminating his work and his critical thinking in Italy and abroad. It is impossible to approach this subject without immediately thinking of Gustave Courbet, the ideal mentor of these works also for Pozzati, who had pinned a reproduction of the French painter’s Origin of the World on the wooden wall of his studio that served as an operational support and as a receptacle for visual notes and impromptu words. If Courbet in 1866 had scandalized the public by painting a realistic close-up full of bodily moods that freed the nakedness of any idealization, Pozzati investigates the mystery of the female reproductive organ starting from the suggestions generated by its anatomical morphology, which becomes the matrix of infinite series of variations in which the subtleties of painting soften the assertiveness of graphics and pyrography.

The theme is therefore clear and ostentatiously reiterated, with a sly wink to the obsession with seriality typical of Pop culture (of whose Italian declination the artist was one of the greatest exponents), but also to a certain irreverent taste for the hyperbolic repetition that recalls those strands of medieval comic-realistic poetry with a playful or political subject such as invectives and plazers or enuegs, lists of pleasant or annoying things from the Occitanic tradition. But, just as these visual and literary references often concealed precise coded messages addressed to the most sensitive recipients, even the ease of the painter who throughout his career had tried to “paint again after the end of painting” seems to summarize, in disguise divertissement, the most mature and multifaceted outcomes of the passionate research that lasted a lifetime on the potential of the specific pictorial to deliver it to the future, demonstrating its vitality precisely in the moment of its apparent loss. Hence, there are many intuitions for which the vulvas are the spokespersons: first of all, painting as a resistance to the dispersion of contemporary hyper-communication and as a happy immersion in the slowness of the gaze. Painting as a tool to peer into oneself, undressing oneself to the point of eliminating the extraneousness of the gaze with respect to the observed objects that end up living in symbiosis with the painter, so much so that it is possible to exchange their points of view because “the artwork has eyes” and it looks at its author (and not vice versa).

“If the painter no longer looks, he imagines vulvando, he dreams even with his pupil wide open because he is afraid that the dream will vanish by falling asleep”. Even the visitor to the exhibition, surrounded (or besieged?) by stylized vaginas whose fruit juiciness is not at all attenuated by the simplification of the graphic style, begins to feel restless and uneasy, no longer due to the supposed indecency of representation like Courbet’s detractors , but as an unexpected instinctive reaction in finding oneself unable to attenuate the desire for totalizing and capillary intimacy (with oneself, the world and its mental projections) that these paintings make explode even before the thought, recognizing and categorizing the images, is able to implement the distancing. “All surreal, all drawn, marked, touched, caressed … All not seen but met, the ghost has already arrived. The painter doesn’t represent vulvando but it is the sign that it has its smell and always becomes presentative vulva, always different, eye that opens torpor and heat”. I believe that no more effective words could be found than these, with which Concettos Pozzati himself hinted at how his last cycle – which became in some way also his artistic testament – was nothing more than a metaphor for his approach to painting. The progressive interpenetration between subject and object, implemented through the mediation of sign and color, creates a tangible meeting space between the two poles in which every differentiation is canceled, to the point that the painter (like the spectator) is contolled by gaze of the artwork which, in addition to resembling him/her in an alarming way regardless of its figurative pretext, makes visible those unspeakable fissures of unknown and uneasiness that have always gone through the human beings.

When we overcome the vertigo of multiplicity that seems to annihilate us entering the exhibition and we place ourselves in the eye of the storm (temporary comfort zone from which it is possible to individually observe the details of each work), it becomes clear that the vulvas are nothing more than predatory eyes and voracious black holes ready to introject the existing. Although at first sight the subjects of the representation seem all the same, actually no one is identical to the other as never identical to itself can be a perception that finds its deepest identity only in the here and now, and their diversity reveals the intrinsic carnality of an image that always needs to feed on matter to exist and to indulge its metamorphic and allusive nature. Not only vulvas, therefore, but also eyes, fruits, padlocks, caves or flowers diversified in size, technique and style, to demonstrate how painting can be an inexhaustible linguistic archive capable of autonomously reconciling all its own internal contradictions to adhere to the more unspeakable vital impulses. 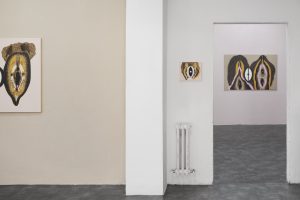 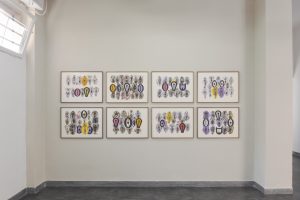 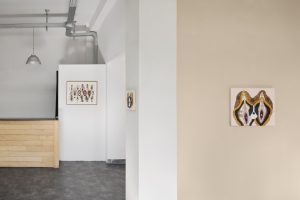 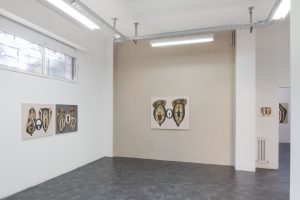 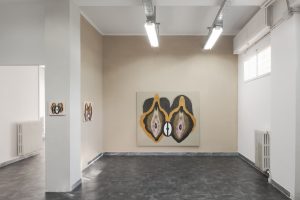