The Lupa district in Siena has for several years now boasted one of the most attractive and emblematic institutions of contemporary research, achronic in its development and empirical in its proposal. Where once the waters of the Fonte Nuova rolled by, today Museo d’Inverno, run by the artists Eugenia Vanni and Francesco Carone, is stuck, faithful to the original proposal to narrate an aspect, episodic or long-lived, of the artist invited through works by friends and colleagues collected over the years: in this perspective, the curatorial aspect of the guest, Michelangelo Consani, stands out and crowns his own artistic investigation conceptually focused on the material-environmental relations, definable as a Concrete Narrative.

Starting from the re-enactment of his collaborative and personal relationship with Emilio Prini, manifest in the title of the exhibition “I did not make the chair the table the sheet the pen with which I write”, aphorism by Prini that seems to take back Antonio De Curtis[1], Consani exploits the spaces contained in the Museum to recreate a biopic interpreted by well-matched works and anecdotes, both aesthetically and synchronously. If the memory of Prini, the most authentic of the Arte Povera movement, is extremely concentrated in the meager installation in the first room of a photograph, a text and a frame never filled, the second room offers the swirling meeting of the artists known and collected following a chromatic and even cinematographic logic, with the reading of an oblique overview[2].

Thought dominates, certainly with the meditative accent of the first room brought by the reading of the tribute text written in a diary tone to reveal the mystery of the workless frame, but persists in the conceptual and post-information works of Aníbal López, Deimantas Narkevicius and Kendell Geers, communicated by typographical signs. In particular Kendell Geers, with “noituLOVEr” stigmatizes those destabilizing forms close to the work of Consani as already prescribed by Celant at the origins of Arte Povera[3] emphasizing the need of the artist-researcher to overturn the established order, because the revolution is not evolution, it is not a transformation tending to a certain end. The dynamism of the exhibition also lends itself to an oscillatory motion, in the authorial duality of the works, peculiar to photography (Michelangelo Pistoletto, Robert Pettena, Ugo la Pietra), and is rendered plastically by the fire of the lit fireplace which serves, moreover, twice as much role of memory and change, precisely Revolution, by no means vehement rather, as aforesaid, meditative and evolving, an internal revolt equal to a state of consciousness.

Likewise, the mutation of the flesh is an inevitable element in the perceptive-evocative process, not only at an experiential level but more intimately existential, implemented as a subtraction / extraction[4] imbued with the traditional Michelangelo’s “levare”: it is clearly alluding to the unique sculptures on display , the precious anamorphic by Emanuele Becheri and especially the Lupa by Davide Rivalta positioned in the third terraced area of ​​the Museum, guarding the city to which it is an icon. In a concentrated and vibrant sequence of past-present-future, the exhibition feature film[5] proposed by Consani concludes, three white, red and silver paintings, almost to pay homage to Senarum signum et decus, the colors of the host Contrada.

[1] The declaration attributed to Prini “I have no plans, I grope, I see no trace of the birth of art (or tragedy) because CS is not the fruit of pure human labor (because I did not make the chair the table the sheet the pen with which I write) I do not create, if it is possible. ‘ tangibility of their work: «I am not an artist, but only a salesman of rumors, like Petrolini who, in fact, has been forgotten. A carpenter is worth more than the two of us put together, because at least he makes a wardrobe, a chair that remains. We, at best, when it goes well, we last a generation. The writing remains, a picture remains, even a sink remains. But the chatter of the actors pass “. See O. FALLACI, Oriana Fallaci and Totò, the metaphysical prince, interview on the European, 1963 and L. DE CURTIS, Totò. Are we men or corporals? Semi-serious diary of Antonio de Curtis, Newton & Compton, Rome, 1996.

[2] The empty-full arrangement is a symbol of Consani’s artistic journey. From attending with Prini, to whom he was an assistant, he draws that authorial impoverishment of the work of art in favor of a close “absence” both to a western philosophy (Deleuze, Bourriaud) and to the doctrine of “do not” by Masanobu Fukuoka.

[4] Term coined by Gilles Deleuze especially after the meeting with Carmelo Bene, in the second half of the Seventies. Already in Difference and Repetition the philosopher captures the innovation of the anti-representative processes, but it is precisely in the theater of Bene that he fully adopts the idea of non-representation. See G. DELEUZE, Difference and repetition, Cortina, Milan 1997 and C. BENE & G. DELEUZE, A manifesto less, in «Overlapping», Quodlibet, Macerata 2002 and L. CHIESA, The theater of subtractive extinction. Bene without Deleuze, “Mimesis Journal”, I, 2 (2012), pp. 107-123.

[5] The insistence on cinema comes from a chat with Consani himself; the artist claims to have been inspired by three films to set up the three available spaces, namely Una pura formalità by Giuseppe Tornatore (1994) for the first room, Brutti sporchi e cattivi by Ettore Scola (1976) for the second room and 2046 by Wong Kar-wai (2004) for the outdoor environment. The inspiration, more ideal than formal, marks the temporal relationship of the exhibition, with a good dose of irony to describe the communion of the artists (attitude already of Prini) and surreal and futuristic tips for the relationship with the works (technically the Lupa of Rivalta is a next purchase of his collection). 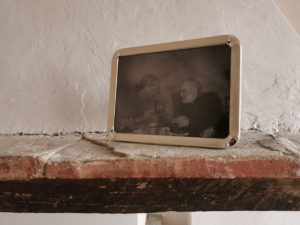 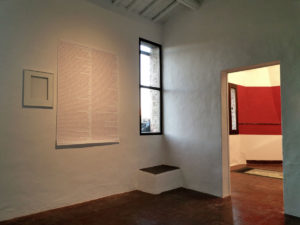 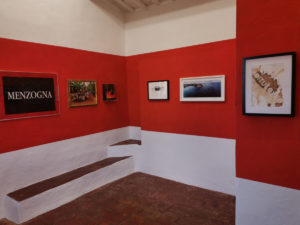 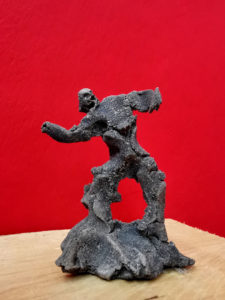 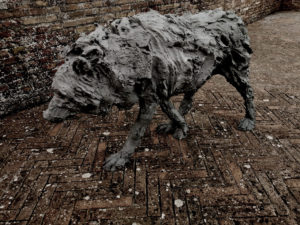