Dan Shaw-Town. In the sign of the incorrectness of...

In 1952, Michel Tapié introduced the term Art Autre with the publication of his homonymous book, in which he expressed the idea that art expressed itself breaking free of figurative schemes and through more or less legible forms of tangles, lines and layers of matter gradually revealing themselves to the viewer’s consciousness. The idea of a different kind of art is indicative of an art craft that focuses on the dynamic aspect of the creative act, in which the actions of making and creating and everything that happens uncontrollably in these two phases are nested differently in the work. This form of art is based on the phenomenal nature of the sign regardless of its semantic content and it inspired the artist Dan Shaw-Town (Huddersfield, UK, 1983) whose works are exhibited in his solo exhibition Making, Doing & Happening curated by Simone Zacchini at the 1/9 unosunove gallery in Rome.

The exhibition presents a corpus of new works produced specifically for the space, in which the canvas is not presented as a support, but rather as a creative place in which it is possible to recognise the instance of the gesture, characterised by an impulsiveness that degrades figurativeness, an aspect that proves to be of no primary interest to the artist. The element that connects the exhibited works is that the canvas presented in its raw aspect. So much that, before the inventive act, the canvas is not given any primer. Rather, it is free to stain and absorb imperfections and marks. The artist – boldly using mixed techniques such as graphite, oil pastel, acrylic colours and in some cases grease – traces states of strong sign tension that translate into explosive and incorrect forms, as if the canvases were the result of a permanently halted happening. At the base, there is a contamination idea of the pictorial act that becomes the expression of a diametrically opposed process, which is privative, but at the same time inclusive: in the first case large spaces of raw canvas are free and deprived of any form, in the second case, instead, the work is the expression of an actionist vigour that explodes in robust nebulae of colours and tangled signs.

This form of exaltation of the gesture contains the intention to stimulate the perception of the spectator, who is invited to decipher the most significant aspects of the image. In other words, a slow and meditated reading process is initiated, In the works, in fact, figurative clues emerge within a phenomenological and perceptive development that remains, however, embedded in the skein of lines in continuous conjunction. These signals, which nevertheless want to leave the viewer free from any figurative interpretation, constitute, according to the words of the curator, “a new sensitive dimension of artistic language, in which the reflection on the temporal dimension of visual/interpretative experience encompasses the spatiality of the work”.  The origin of the image, in other words, lies on the edge of intuitive equilibrium, which, quoting the philosopher Maurice Merleau-Ponty’s statement on the concept of perception, is to be considered as a “pure sensation [which] will consist in expressing an undifferentiated, instantaneous and punctual shock“.

In the course of this last reflection, it is interesting to ask oneself, what such an apparently chaotic and visually corrosive work contains: certainly, the feeling of an emotional and perceptive state, according to Merleau-Ponty’s words. In this regard, it is necessary to consider that all of Dan Shaw-Town’s previous artistic production was characterised by the use of aluminium marked by a system of well-defined geometric grids. This type of research changed at a moment of development in his career, reflecting an emotional state and coinciding with his move from the frenetic city environment of Brooklyn to the countryside area of Long Island.

The previous production, characterised as it was, by the most varied geometric forms, constituted the legacy from which the current production in the exhibition originated. It is the curator, Simone Zacchini, who notes this when he clarifies that in the analysed works “the presence of a Euclidean geometry coexists with the interweaving of signs”. However, cold aluminium, the primary material initially used in the first creative period, also appears in this latest production, more specifically in the frames of the works, all carefully prepared and welded by the artist, so that this material finds itself in a natural dialogue between the warm, raw material of the canvas and the cold metal.

It is evident that the exhibition shows that the works are a place of occurrence and incursion in which nothing about the creative action is hidden. So much that in some parts it is possible to see the marks left by the artist during the act of framing on the aluminium frames. Furthermore, in the exhibition, as a form of discontinuity with the other works on display, the work entitled Wandering Through the Sea is presented freely on the wall, according to a curatorial choice that, in Zacchini’s words, is justified as follows: “this is one of the only works in which the surrounding space flows back and it is implemented in a propulsive manner”.

In conclusion, Dan Shaw-Town’s creative impulses appear as actions aimed at completing, but also overturning, space according to an inexplicable rebus in which figuration is always swallowed up by appearance: the result is a visual incorrectness that captures the visitor’s perception. 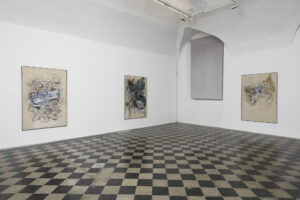 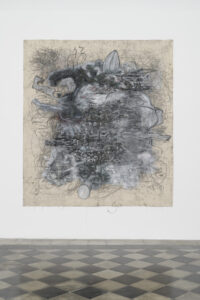 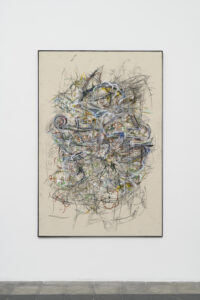 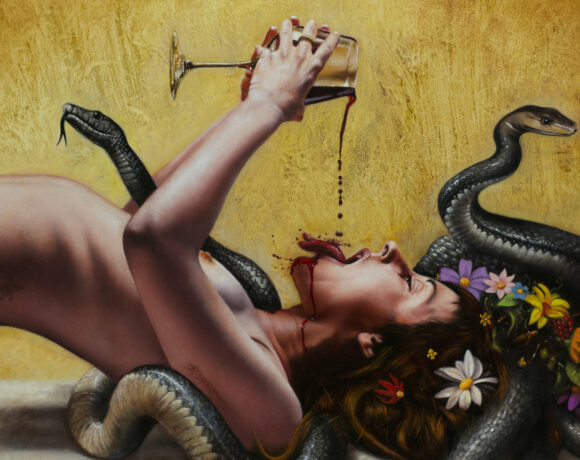 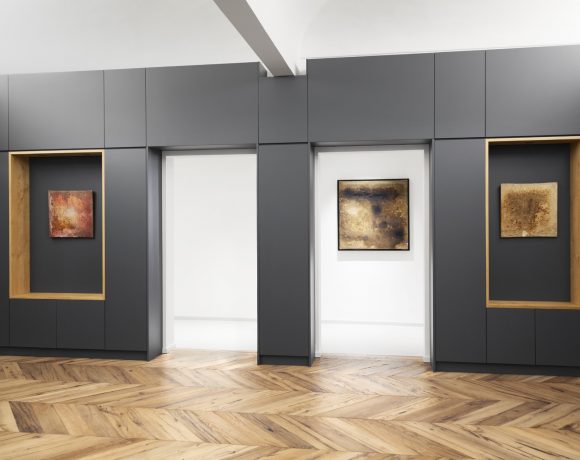 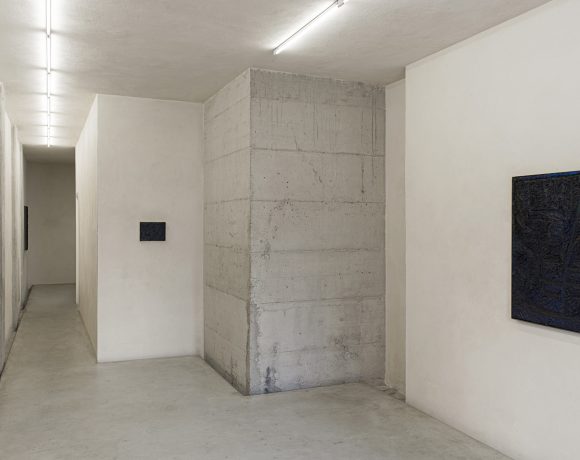