The truth told by Teresa Margo..

Daniel Buren (Paris, 1938) is an over-celebrated artist known throughout the world. His youthful debut was between the end of the sixties and the early seventies, when in the puritanical perspective prevailing in those years he reduced painting to a schematic and minimalist model, based on 87mm bands, alternating with two colors. From the very beginning, however, his extroversion and a positive instance of social dialogue led him to create not only paintings (that is, developed on canvas), but also environmental installations or outdoor interventions. His work must therefore be framed in the field of conceptual and procedural thought, to then develop, starting from the eighties, on the interrelation between public space and architecture. Daniel Buren has based his practice from these decades, among other things, on the idea of ​​a “zero degree” painting, which consists in the negation of painting (on canvas) as an object and its reduction to minimal components, color and support, according to a logic that has been typical of the entire Support / Surface group, to then abandon this radicalism and expand to a more articulated and more complex chromatic and geometric idea.

Buren received, among many honors and awards, the Golden Lion at the Venice Biennale in 1986 and the Premium Imperial in Japan in 2007. In 1985 he created his perhaps most controversial public installation, Les deux plateaux, in the courtyard of the Palais Royal in Paris, but it is understood that the scandal was determined by the proximity to the great memories contained in the nearby Louvre. As if to say, pretending to dialogue with the sacred enclosure of the memories kept there, it could seem risky to the quiet mind of the good bourgeois or, wanting to see it in another way, after many decades, the Nike of Samothrace (cited by Marinetti in his Manifesto of Futurism) struck again.

In his career, Buren has exhibited in the most important museums and institutions in the world including the Center Georges Pompidou in Paris in 2002 and the Guggenheim Museum in New York in 2005. In 2012 his Excentriques exhibition was presented as part of the “Monumenta” at the Grand Palais in Paris. The Observatoire de la lumiére, an intervention related to the building of the Louis Vuitton Foundation, was instead created in 2016-2017.

It is worth mentioning that Daniel Buren has made more than 3000 public interventions all over the world, and this demonstrates a truly articulated creativity, albeit based on minimal language.

As for Italy, we remind you that in Colle Val d’Elsa, as part of the redevelopment of the historic city center (on a project coordinated by Jean Nouvel’s Atelier), he was responsible for the flooring of Piazza Arnolfo di Cambio. Then, in 2005, invited by Giuliano Gori (from Fattoria Celle) he created Partitions colorées for the New Hemodialysis Pavilion in Pistoia, also creating La cabane eclatèe aux 4 salles for the Gori Collection. In 1999, in Turin, he joined the “Artist’s Lights” project with the intervention of the Flying Carpet, in Piazza Palazzo di Città. The first presence in Italy of the work of this great contemporary master was recorded in 1968 at the Apollinaire Gallery in Milan. The explosion of his work in Italy, however, dates back to 1974 with a series of on-site interventions in several galleries: Toselli in Milan; Art / Tapes 22 of Florence; Sperone (in the Turin and Rome offices); Modern Art Agency by Lucio Amelio, in Naples.

Now, the Galería Hilario Galguera proposes a demanding solo show by Daniel Buren: “Las cajas, trabajos situados, 2022”. This exhibition is made up of twenty-five environmental works, produced in Mexico and designed especially for the gallery, and is all centered on the figure of the square. The interior walls of the gallery, covered by colorful modular sculptures, modify the experience and understanding of the architectural space through reflections, geometries and perception games that double the virtual dimension of the work. The colors are really many: they range from green to yellow, from red to blue, in a lively and immediate armony, and this exhibition is a further confirmation of the chromatic richness that characterizes his most recent work.

Buren has previously collaborated with Hilario Galguera, and specifically, in 2014, he had made, at the invitation of the gallery owner, one of the most significant interventions of his career at the Hospicio Cabañas in the city of Guadalajara, Jalisco. The neoclassical architectural configuration of the space, designed by Manuel Tolsá, was an aesthetic echo of the drawings of André Le Nôtre, a French architect whose works influenced Buren’s work. This intervention, together with the presence of the mural by José Clemente Orozco in the main chapel of the hospice, marked the completion of one of the most significant and emotional of Buren’s lifetime as a creator. Two years later, in 2016, Buren returned to Mexico, invited by the governor of the state of Aguascalientes, Carlos Lozano de la Torre and Hilario Galguera, to create another monumental work entitled Como un juego de niños (“Like a child’s game”) At the Espacio Museum. Therefore, Buren’s dialogue with this wonderful country and thanks to the commitment of the gallery owner Galguera, continues to bear fruit. 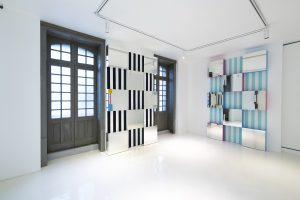 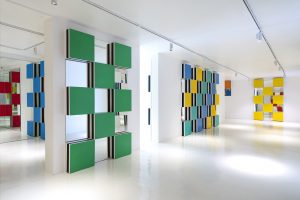 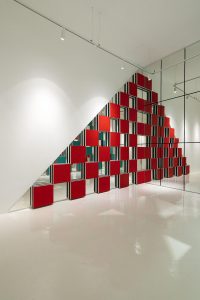 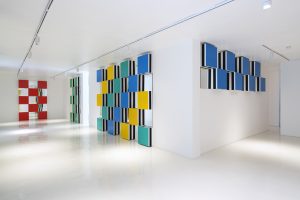