The soft and tender touch of the monographic exhibition “A Leaf-Shaped Animal Draws The Hand” by the artist Daniel Steegmann Mangrané (Barcelona, 1977) distinctly changes the usual cold atmosphere of Shed of the Hangar Bicocca, transforming it into the lighter, brighter and more sweet. The light allowed into the building for the first time, as well as the wings of impalpable white fabric, placed centrally, resembling membranes, distinctly redefine industrial spaces. As the artist explains, telling about the site-specific concept designed for the Milanese gallery “I was concerned with how to transform this space into a kinder one, as it seemed almost aggressive for its industrial geometries, and how to take it to a more human level”.

By wrapping ourselves in the pleasures of the symbolic “quilt” from the world of nature and in the context of organically organized pastel spaces, the exhibition develops the artistic discourse from the 1960s concerning the ontology of a work of art and the necessity and will of its sensual perception. Other points of interest include the anthropological theory of Amerindian perspectivism, and the organic modernism of Alvar Aalto.

The exhibition opened September 12, curated by Lucia Aspesi and Fiammetta Griccoli, is Daniel Steegmann Mangrané’s first solo show in an Italian institution. To our delight it turns out to be the largest ever dedicated to this artist. It is composed of over twenty works produced since 1998, including design, sculpture, virtual reality, botany and oleaography. The artist perceives exhibition spaces as a field of experimentation, which approach derives from Brazilian Neo-Concretism, located at the base of his work. This interactive orientation makes the exhibition entertaining, enjoyable and accessible for all potential types of the public, involving perception at various levels. Although sensory experiments play an important role, they are not the most important. The exhibition remains surprising mainly at the conceptual level. The number of complex, internally connected approaches expands along the artist’s declaration: “Blending the inside and the outside of an exhibition is one of the first duties of art: the museum space can no longer be a space for the accumulation of artifacts, isolated and protected from the outside world, but must become a place where our relationship with objects and reality is reconfigured “.

During his artistic education, Daniel Steegmann Mangrané was fascinated by the works of Lygia Clark and Hélio Oiticica, representatives of Brazilian Neo-Concretism. The movement started in Rio de Janeiro in the fifties and sixties, with artists including Alfredo Volpi, Lygia Pape, Amílcar de Castro, Cildo Meireles, Oscar Niemeyer, Lina Bo Bardi and Paulo Mendes da Rocha. Having learned and admired the views that emphasized approximation between the world of art and life, in other words, which made art more democratic, Steegmann Mangrané began to create his own tailor-made artistic adventure. Neo-Concretism approach concerns the question of the close relationship between the body of the viewer and the work of art that seeks to stimulate the senses. Like “Oranges Oranges”, the orange-colored chromatic experience, planned in the cube of which the ceiling and transparent walls consist of a photographic filter. The artist, letting us enter and taste the orange juice, at the same time investigates the question of the boundary of perception. Coming out of space, in the intensity dependent on the time spent inside, the usual vision momentarily transforms, and the external environment turns blue.

The examples of Neo-Concretism are the paintings of Hélio Oiticica suspended freely in space, until the viewer puts himself in the desired position to be able to perceive them. The shapes and colors “escape” from the view, from the regular form of the picture. As from Amerindian perspectivism by Eduardo Viveiros de Castro and Tânia Stolze Lima “if in the Western ontological thinking, nature represents the common context, within which every element of connotation differentiates itself, according to Amerindian cosmology the aspect that unites all living beings is humanity”. (exhibition catalog)

Gabriel Sierra, a Colombian contemporary artist, in his work “Estantes Interrumpidos” (2008-2015), talks about the relationship between form and function, constructing the moving shelves, which lose their function, when they are folded vertically to the wall. The primary form and function are therefore put into conflict. The first question that arises at this point is whether the shelf remains an object of utility, no longer having its desirable function. But the second question, of the opposite situation, is even more essential. If I can use the artwork, is it still the work of art? It is the ontological problem to which the answers have been given more than a few times. At the exhibition they are put under observation by Steegmann Mangrané who approaches them extremely neatly, for example in the “Table with Two Objects (2016)” and “Table with Objects (1998 – in progress)”, simultaneously giving attention to the procedural side of the work of art. On the table, there are the works never realized and fragments of future ones, the objects that feed his daily practice.

In the “A Transparent Leaf Instead of the Mouth” (2016-2017) – the installation in the terrarium of glass and metal, ecosystem composed of oak, beech, bramble, fern native plants, stick insects, mantids, leaf insects – the artist back to using phasmids, a particular species of insects that are camouflaged with the surrounding environment. The installation investigates the relationship between dissolution and belonging, the interdependence relations, as well as the boundaries between the subject and the environment. Steegmann Mangrané involves the public in search of animal forms that resemble their habitat, exposing us to the surprises of the discoveries, making us turn around the vivarium, depriving us of univocal interpretations. This work subtly refers to the organic modernism of Alvar Aalto, which is, in a nutshell, a system in which architecture combines modern and organic forms and functions to create spaces suited to nature, as well as to the contemporary world.

But the question also refers to social and political affairs, where the boundaries between reality and fiction seem to have recently collapsed. “For me, stick insects are a symbol of something that belongs to two different kingdoms, animate and inanimate, at the same time object and subject, figure and background, but also an element that haunts our present. With its ambivalent presence the animal seems to dissolve within its own surroundings, but at the same time it contaminates them and infuses them with its own life: every twig or leaf becomes suspect of being something else … and you know what? They really are something else! ” – explains artist for Artribune.

Furthermore, the whole “A Leaf-Shaped Animal Draws the Hand” exhibition is dressed in the distinct form of nature. It has happened that, due to the climate catastrophe, we have been in a fairly specific relationship with nature for several years. Symbolically it is above us and we are forced to show absolute respect to it. Driven by public opinion, but also by the internalized voice, each of our responses to works that involve nature is forced and reserved. From this point of view we can also try to evaluate how natural the approach we present is. The exhibition in some ways accentuates this prudent trend with works such as “Rotating Table / Speculative Device (2019)” and “Elegancia y Renuncia (2011)”.

Many other works – such as “Spiral Forest (Kingdom of all the animals in my name) (2013-2015)”, “Spiral Forest (Gimbal) (2014)”, “Phantom (Kingdom of all the animals and all the beasts is my name) (2015) ” (a virtual reality in the Mata Atlântica, wearing a viewer, the visitor is in a three-dimensional environment in black and white that reproduces in every detail an area of the forest) – can be considered as the tribute to both nature and the fragile and precious rainforest. These questions make the exhibition not only elegant and stimulating, but above all extremely current. “Entering the tropical forest for the first time, (…) changed my perception of our role in the world” – said Steegmann Mangrané during the press conference of the exhibition at the Hangar.

From the strictly aesthetic point of view the elements that elevate all the above-mentioned conceptual theories from the ground level, is for example the poetry of Stela do Patrocínio (Rio de Janeiro, 1941). She was never considered a poet and was abandoned by her family to the Colônia Juliano Moreira psychiatric hospital until her death in 1997. Her words were transcribed in a book by Carla Guagliardi entitled “Reino dos animais e dos bichos é meu nome” (“The kingdom of all animals and all beasts is my name”). It can be assumed that the view of things from a different perspective from the norm came to light due to the alleged Stela’s illness (or on the contrary, and she was, indeed, a true, unsuitable poet), however “time is gas, air, empty space”,”I didn’t want to have human form, human flesh or human matter that I became” or “you’re eating me so much through your eyes, that I no longer have any place to draw strength from to feed you “, as well as some words used by Steegman for the exhibition are undoubtedly penetrating and unforgettable verses.

Another mode that gives voice to poetry, this time visual, is the use of 16mm film, applied for example in the work of the same title “16mm (2007-2011)”. It is a dense, slow, but somewhat violent entry into the forest with the video camera designed specifically for this project. The artist reaches for structuralist cinema, with the theoretical annulment of every illusory and seductive function of film, one that instead emphasizes the mechanisms of recovery and projection, all this to grant its authenticity. Artist explains that “every meter of film filmed corresponds exactly to one meter of path in the forest”. (video)

Thus, we also reach the proclamation of conception of space itself. Still in the interview with Ginevra Bria for Artribune, the artist describes his approach to the design of the Hangar space: “The visitor’s experience traverses the space wandering from moments of concentration to very small details up to moments in which the entire space is captured within a single view. This gives a rhythm to the look, which could be assimilated to breathing. The approach seems to be a strategy of many that takes as much time as possible. The intention is to reach a moment in which the visitor stops interacting with the individual works, but realizes that he is tangled up in the thousand relationships that emanate, between his own intrinsic movement to the path, the works and the relationships created by each component. I believe that only then will the exhibition truly represent the interest of a research “.

The exhibition opens studies on the field of observation and admiration of nature intertwined with conceptual research, which is visually exceptionally subtle. The physical body of the visitor makes the important part of the exhibition with experimental ambitions, while the gallery plays with the usual exhibition practices (it is not the first time that Hangar Bicocca proposes these attempts – let us remember “Take Me <I’m Yours>”, 2018 and “Doubt” by Carsten Höller, 2016). 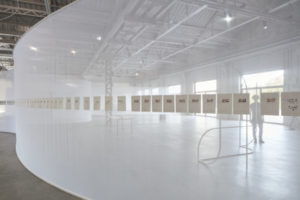 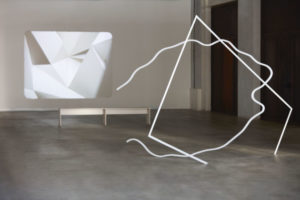 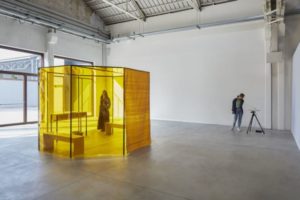 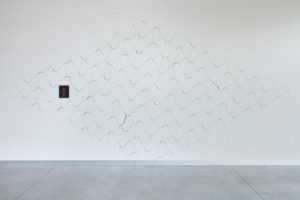 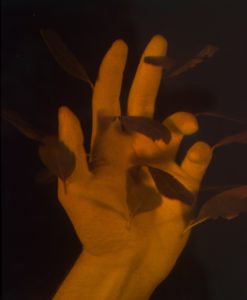 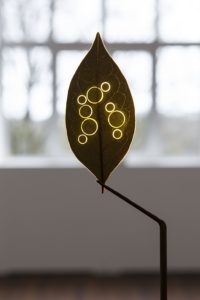 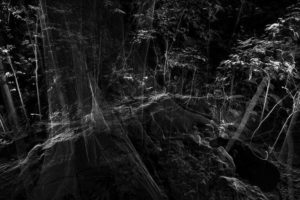