Figure Out. Proposals for a co..

David Tremlett (St. Austell, Cornwall, 1945) presents the latest results of his research in Bologna with a new solo show at Studio G7, the gallery from which he is represented in the city which hosts one of his famous wall drawings, the environmental permanent intervention A New Light. Wall, Ceiling and Floor, created in 2003 (in collaboration with the Alfonso Artiaco Gallery) in the fourteenth-century Chapel of Santa Maria dei Carcerati in Palazzo Re Enzo e del Podestà. Precisely this mural painting is for the local public the ideal starting point to fully understand the artist’s approach, who claims, although at first glance the opposite might seem obvious, that he had never been a painter and that he considers sculpture as his reference background. The use of geometry as a structural grid and of pastel color rubbed by hand on paper or on the wall, the stylistic code that has distinguished Tremlett’s work for over forty years, stems from the desire to restore a synthesized perception of the landscape, intended as a complex experience of a space that is at the same time geographical, architectural and cultural, as well as biographical. It all originated in the late 1970s, when the artist traveling to Australia, Africa, Iran, Afghanistan and India was struck by the large polychrome surfaces covered by hand with pigments that he saw in those countries and decided to choose the colored powders as his main expressive tool, to be adopted both in the large geometric drawings made on architectural surfaces and in the papers.

The works on display at Studio G7 also derive from an environmental project, namely the wall drawing created between 2020 and 2021 on the ceiling of a room on the first floor of Palazzo Butera in Palermo where the artist, in dialogue with contiguous frescoes painted around 1760 by Gaspare Fumagalli and Gioacchino Martorana, has reinterpreted the theme of squaring and perspective breakthrough in a contemporary key. To contextualize this bond and immerse the visitor in Tremlett’s vision, even the walls of the gallery that host his works on paper were painted with soft colors that turn from gray to peacock, similar to the palette that constitutes the chromatic leitmotiv of the walls of the historian Sicilian palace, acquired by the collectors Massimo Valsecchi and Francesca Frua De Angeli in 2016, presented for the first time to the public as an exhibition site opened in 2018 on the occasion of Manifesta 12 and officially active as a museum institution and private residence since May 2021. The exhibition at Studio G7 therefore, in addition to bringing together a precious series of recent works by the artist, is particularly effective in demonstrating how essential for Tremlett the relationship between space and design is and how this relationship always implies a constructive attitude and return and not just the return in a different language of a reminder environmental tation.

The collages from the My Places series, for example, are compositions of paper clippings taken from Italian maps, manuscripts and printed texts on electrostatics found in Palermo during his stay for the works at Palazzo Butera, in which the dispersion triggered by the fragmentation of the pages and the writing freed from the logical consequentiality of the text is averted by the interventions in pastel and graphite which, identifying geometric shapes, articulate the pictorial fields as if they were imaginary architectures, deliberately ambiguous between the plan and the facade. This process has evident syntactic affinities with the way in which the restlessness (electrical, as the subject dealt with by the books used by the artist as a sculptural material) of the eighteenth-century rocailles is stemmed by the trompe l’oeil architectures that anchor their spatial distribution to the real architectures, without renouncing (as also happens in Tremlett’s collages) the wonder of the vertigo of the infinite. If from a technical point of view the sheets on which the artist intervenes can be considered as the preparatory phase of his environmental interventions, from a semantic point of view the derivation relationship is not so unique. On the one hand, in fact, the colors and signs superimposed on the pre-existing structures radically change their perception, while on the other hand, the papers manifest without mediation his thought activated by the landscape in the form of a chromatic trace.

The constructive vocation of Tremlett’s language emerges even more distinctly in the drawings on display, all made starting from the segmentation of a rectangular shape operated by vertical, horizontal and curved lines generated at the mutual points of intersection based on the repetition of the same graphic rule. which, with the complication of the grid, creates an apparently irregular grid. The resulting assemblages of geometric shapes are then partially covered and unified by a layer of color that identifies an elegant monochromatic shape at the center of each composition, mysteriously evocative of a specific balance between volume, surface and weight. In this way, the paradox of an almost hysterical geometry produced by the rigorous application of an arbitrary protocol finds a design purpose precisely through color, the element that we would be instinctively tempted to consider freer, but which on the contrary recomposes the centrifugal tensions of drawing in a structure. But the executive virtuosity, which can be admired in Rectangle 2 (2021), a drawing that reveals the proliferation of signs normally hidden by color, is not the main reason for the fascination of these works. What makes them exciting is, in my opinion, not so much the artist’s surprising ability to keep the strings of a construction always on the verge of getting out of hand, as their poetic and philosophical essence, identifiable in an attempt to control chaos with empirical means and in the irresistible attraction for a space impossible to mentally circumscribe in its entirety. 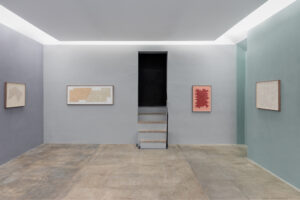 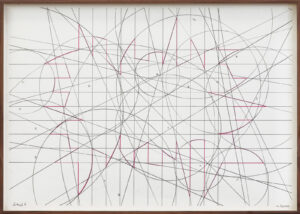 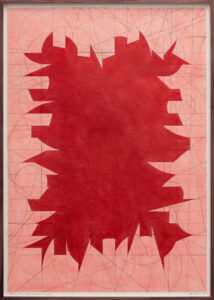