Death and Resurrection of the image. Paul Thek. It...

“Art was an instrument of the rite”, said Susan Sontag in her famous literary work Against interpretation and other Essays (1965) before this became mimesis with the advent of Platonism as representation of reality. Nowadays it is clear that, as Debray says, “art is born funerary and that it is reborn as soon as it is dead”. According to this thesis, simulacra, which are spectators of ancient rituals, were the witnesses of the cult of ancestors and the ontology of the image was a further tool to celebrate them. Italy, as a historical cradle of simulacra and devoted homeland of rituality, was the muse of Paul Thek (1933-1988), an American artist, who in the summer of ’63 was in Casteldaccia, Sicily, thanks to the gallery owner and patron Topazia Alliata, who offered him the opportunity to use the medieval tower of the place as an “absolutely ideal place to work”, in the artist’s words. 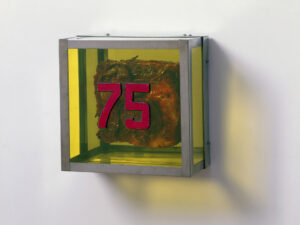 Paul Thek. Italian Hours, a solo show curated by Peter Benson Miller and opened last October 27 at Fondazione Nicola del Roscio in Rome, seems to be a deep, delicate and sometimes even raw dedication to the American artist in his Italian stay. The works on display appear to be a more intimate, sometimes melancholic, perspective of Thek’s artistic practice, an anthological collection of his artistic production ranging from painting to installations to small sculptural works to letters and personal notes. 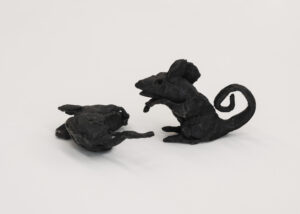 The American scenario between the sixties and seventies saw Minimalism and Pop Art dominate among the various practices. Those currents reflected, with diversified artistic forms and languages, the American culture of the time – the same that Thek looked at with a strong ironic tone – straddling a historical, political, socio-economic period that then strongly marked the American conservative class. The birth of hippie culture, feminist movements and the first “queer theories” – which would explicitly appear only in the nineties – which went against that conservative value system, provoked the need on the part of some artistic strands to express and manifest the sense of caging and alienation that their own society generated. The breaking point came with the publication of political-literary manifestos that were later proponents of collective ideals, like Sexual Politics (Kate Millet, 1970) and Feminist Abstract Art: A Political View (Harmony Hammond 1977) to name a few. 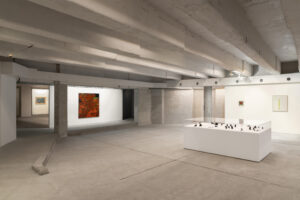 It is precisely with the series of sculptures entitled Technological Reliquaries (1967), some of which are on display (Untitled #75, 1964 and Meat Cable, 1969), that Thek charged the dynamics of imprisonment – already expressed by Kate Millet, Harmony Hammond, Andy Warhol and David Wojnarowicz – inserting pieces of cut meat or cut limbs made with cold wax inside elegant almost sci-fi “reliquaries” made of glass and plexiglas or between steel wires simulating the sumptuousness of jewels and modern industrial materials and evoking his idolatry towards funerary art and simulacra as an echo of his education pregnant with traditional Catholic values. “Like many mystically inclined sensualists, Thek had a fundamentally religious imagination,” said Robert Storr (This Time Around.Recalling the difference between hermeneutics and erotics, “FRIEZE,” January 1, 2011[1]). This feature was expressed through works poised between rawness and a refined beauty, between an evocative polychrome cut sparkling and saturated, and sometimes monochromatic playful and almost suspended (tones that had a more fertile ground among European collectors than in the American ones). 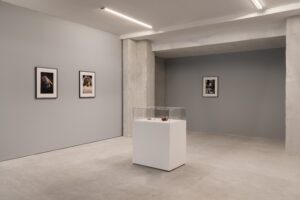 In Sicily the Sicilian natural landscape appears to be a blood-stained land, which Thek reinterprets and contaminates with small green and yellow streaks, passing from abstraction to realism and almost voluntarily recalling the narrowness of cut limbs, guests and witnesses of an ancient ritual. The naked, raw concrete environment of the Fondazione Del Roscio exhibition space seems to perfectly marry Thek’s solo exhibition, like a contemporary crypt, a collection of many simulacra and a container of memories, where small statuettes of animals and objects (from the series The Personal Effects of the Pied Piper, 1975-76) in wax are kept and protected in a display case in the middle of the room, a strong reference to the traditions of a now far away culture. 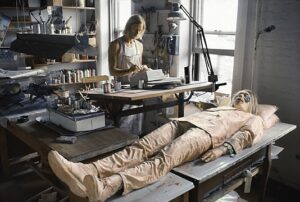 In a side room, we find what remains of The Tomb, an emblematic work by Thek now destroyed but previously exhibited at the Stable Gallery in New York (1967),which offers the viewer the opportunity to contemplate the remains and offer a greeting. The photographs by his comrade Peter Hujar, as funeral images, testify to the memory of the work now disappeared. But what was Imago in ancient times, if not the wax cast of the faces of the dead? The same that portrays the detail of Thek’s face, the shadow of his double: a wax fetish with his eyes closed and his cheeks covered by fluorescent pink disks, a dye strongly linked to a conventional vision of femininity and the hippie cult, the black tongue protruding from the mouth, probably contaminated by drugs, which were very popular in that period.