Delio Jasse is an artist who uses the archive and some unconventional printing processes in his practice like cyanotype and van dyke brown. He exhibited some of his projects in Bologna during Foto/Industria (2019 edition), near to really important photographers such as Luigi Ghirri and Lisetta Carmi. Then Covid-19 came… Since I had seen personally his works during the show, I decided to have an interview with him in order to know if and how the global emergency has changed his method and which are the projects he’s working on.

Lucrezia Costa: Where does you interest in memory and archive comes from? How do you work and use these themes in your practice?
Delio Jasse: My interest in these themes comes from the lack of information: when history is distorted or told in a wrong way, I feel the necessity to add some missing informations. I’m less interested in photography than in the archive, because the latter leaves a sign in time that will tell a story in the future. Angola, the country I come from, an ex-Portuguese colony, was violated in her historical memory and culture too many times. It was important for me to find a narration and tell it in a simple way, as an archeologist digs and looks for traces, I move in history, look for hints and write a new version. This is the reason why I principally work with objects and photographies those are given to me or that I buy in flea markets, completely avoiding institutionally recognized archives.

Your working method has a really strong material component: graph papers, old photographs and vintage newspapers found in flea markets. What’s your relationship with analog and with digital art?
When I start to work on a project I put in front of me a blank paper sheet and then I collect information, pieces and fragments. I reckon it’s very near to the practice of the writer: when he writes he has to choose words, put them together, make some tries and then he creates the sequence that constitutes the final sentence. In my job I do exactly the same, I take elements from newspapers, websites, books, cutting and reassembling them in collages on the blank paper I started with. So I realize a photography without using a camera. Then this image is printed on the final support that could be a thick paper, a canvas, a film, always working with photographic technique. The process to create a visible picture is always analog: also if I use digital art because it’s faster sometimes, then I translate all the material in an analog form, and by doing so I invert a consolidated praxis among my colleagues.

Covid-19 stopped your incursions in garage sales and antique shops where you were used to go and find photographs and paper material. How did you react to this stop?
I started to buy some materials online, for example on e-bay or through some web auctions, particularly concerning the project I’m working on about Eritrea and ex-Italian colonies in Africa, always paying attention to my informal archive. This new process is really impersonal and difficult for me because it leaves apart all the physical part and the contracting moment with the seller. I love hearing him trying to convince me to buy something because most of the times the seller knows more about the story of that object. It doesn’t matter if we are talking about a map or an image, the person in front of me has to be able to persuade me about the big deal I’m doing.This moment is really fascinating, it’s made of small lies sometimes to convince me to buy and it creates a judgement in my mind that helps me to take a decision. In that moment the seller becomes like a real curator of anonymous stuff. Online everything is less personal but on the other side there’s the possibility to get anywhere and be more selective: for example I bought an image of the first Angolan president thanks to a London’s auction, a 6×12 negative that’s very precious.

What are you working on in this period? Which are your future projects?
I am working on a serie that I will call Lockdown or Pandemonio, which consists in one hundred collages realized with all the material that was on newspapers published from February to April 2020. I followed my usual method: I bought newspapers every day for two months, in a historical period that was so full of informations, maybe too many. None used to buy a physical journal in those days, but I bought it regularly, I used to cut what I was interested in and I created new stories on empty graphs papers. I didn’t want to make a denounce or something like this with this work, but I am dealing with another kind of controversy. I broke up and reconfigured all the pandemic informations in order to create new and alternative stories. If the situation will go better, maybe in February all this material will be exhibited in a show in Florence. All the material that should have been shown during suspended exhibitions of 2020 will be visible in 2021, particularly in some shows in Bruxelles (Belgium), in Italy and in Portugal. I am also bringing on the work on ex-Italian colonies in Africa in the Thirties and images printed on canvas about themes like archive and past, those will be shown during my solo show in London at Tiwani Contemporary, in 2021 or 2022. 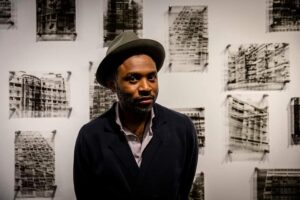 Portrait of Delio Jasse made on the occasion of Foto/Industria 2019 in front of a part of his work Arquivo Urbano, ph courtesy Mistic Media WordPress 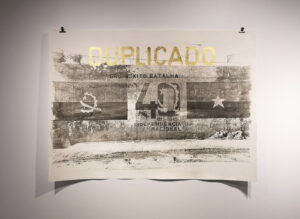 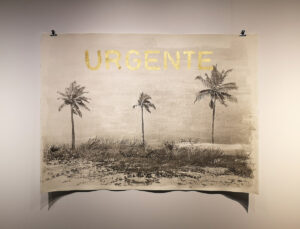 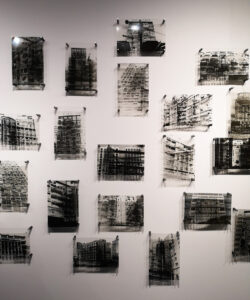