Alluvium, an exhibition by Ram..

Dis-parità: why it is still necessary to show gend...

When the Truth comes out of Th..

The common thread that connects all the set up artworks and that accompanies the path of the exhibition is the urgent need to deal with the theme of gender inequalities through the symbol/medium of the body, here adopted as a filter to know oneself, on a biological and introspective level, but also to measure the self with respect to the context in which one is dropped. Through the works in the exhibition we learn how there is still a heartfelt need to discuss these issues, as it is evident that we have not yet reached a complete acceptance of the Other, a serene and peaceful coexistence with the one who, in the most absurd simplicity, is actually our equal but who, due to a series of social constructs that we have been carrying around for too many generations, we inevitably continue to perceive as “different”.

In addition, it is very significant that this kind of exhibition was presented in a provincial reality, in Vigevano, a town which, although near to a large and synergistic metropolis, such as Milan, often, for the same reason, it risks to live in its shadow by renouncing the construction of a program made of truly interesting and quality social and cultural activities proposals.

The exhibition is divided into three major themes, which are also made explicit on the exhibition level thanks to the architecture of the Second Stable of the Castello Sforzesco. All of them have the “body” as the protagonist, although this is thought, performed and exhibited in different meanings.

Entering, in the right aisle, we can find all the works that treat the body as a tool for self-recognition. Fabiola Skraqi is the first artist we can observe: her two oil canvases show us the representation of internal parts of the human mouth and are made after the study of some gastroscopy photographs. These works show how biologically the bodies are all functioning in a very similar way, however, the modalities in which our brain activates the muscles end up generating disparity. For example, in the mouth pictured here, vibrations that would trigger potential situations of aggression or violence could be created.

Continuing, the large canvas by Rachele Turini depicts two women sitting and waiting for their body to be finally accepted by society: they are naked, helpless, sad and disconsolate. The work dialogues perfectly with Shailey Asha’s close work, the series Skin. The artist, by mixing the palette of colors from Bollywood cinema, creates real chromatic explosions, with the aim of demonstrating how each of these colors has the right to exist and to merge and join with all the others.

Following we find the work by Martina Dendi, the most discussed by the public of the exhibition. The artist exhibits six black and white photographs depicting a circular biological substance that is not well defined. Only later, by observing the glass plate that hangs in front of it, we can understand that inside it there is the artist’s menstrual blood, which she thus photographed and exhibited, canceling the original colored vision, with the aim of adhering, in a, we can say, sarcastic way, to that boring aesthetic of beauty and order, so to pursue her struggle for a freer and less stigmatized sexuality.

Then on display there are the works by Linda Brindisi who, with paper materials from the Seventies, stages a “desecration of the sacred”. By transgressing the Catholic idea that love is true only if it happens before God’s sight, with these collages, instead, an idea of ​​universal and timeless love is reaffirmed. Thus, adopting the figure of the circle as the main symbol of her work, in her three small squares, the artist shows the body of the woman, that of the man and, finally, the explosion of these shapes in a feeling freed from the imposed canons.

Elisa Garofali follows with her drawings, made with lipstick on paper, of five areolas of female nipples. The nipple, if it belongs to a woman, immediately becomes one of the most censored parts of the body in our present time, just think of the artificial recognition systems active on social media and online platforms, such as Instagram, that are capable to recognize and delete from the network only and exclusively the nipples of women, while those of men, although visually identical, have the right to be posted, viewed and liked.

In the central nave we can then find a body as a tool for the living. There is the work I Cani (the dogs) by Matteo Bianchini who, with a strongly punk character, sets up an exegesis of the myth of the androgyne. Starting from a single structure, a pet carrier, the artist has created a couple of completely new structures which, although born with the same initial purpose, that of the shelter, are now non-functional and sometimes grotesque. The two makeshift homes, albeit similar, observe each other from afar and, just like dogs, distrust each other, scrutinizing without ever really interacting.

Furthermore, throughout the long nave there are the kites by Cecilia di Bonaventura, Estetica della festa (Aesthetics of the party), which were born as a criticism to record and bring out the needs of the least listened to in our society: children. A work that comes to life from a field research, in which the artist has put together the testimonies of the children themselves, to finally create five objects that bear the inscriptions: CHI, COSA, DOVE, QUANDO, NECESSARIO (WHO, WHAT, WHERE, WHEN, NEEDED). It is a group of toys that show the need, but also the sad urgency, of the little ones, of having to denature such a dispassionate dimension, like that of play, in order to make themselves heard and to claim their right to have a voice in a society that does not recognize them as autonomous and thinking individuals

The work by Adina Bettega, Domenica italiana (Italian Sunday), consist of a fan placed horizontally on the floor, on which some paper houses are installed so that they float in the air emanating from it. In this way the little houses appear full of life, excitement, good food, but also an infinite chatter, typically Italian, which always turns on itself and never evolves, and which cannot get out of the beliefs of the house to embrace the diversity of the world.

This is also the aisle where two performances took place during the opening day. Giulia Terminio staged Vandatta (we can translate the title as “Ravenge”) by reciting passages from Antigone’s tragedy, rubbing on the ground, suffering and panting on a microphone trying to express a strong inner discomfort, mental and physical, intimate but also towards those who observed the performative action. The video of the act remained as a part of the exhibition. The same day, Lisa Vedovelli staged Comizio (Comitium), three minutes in which the artist shouted political speeches that dealt with the condition of minorities and showed how the body of those who are not recognized within the “standard” is often perceived as a matter of State and politics, and almost never of the people who inhabit it and take care of it every day.

Finally, in the right nave, there are the artworks that present a body as a political instrument. Starting from the entrance, we find the archive research by Elsa Finardi & Ivan Bedeschi who, compared to the works previously presented, adopts the artistic method to carry out a political investigation. In fact, Ivan’s drawings are installed on the wall, they are made without ever removing the pen or pencil from the sheet and without ever looking at the line. Here they are printed on large billboards, similar to street posters, accompanied by phrases and words by Carla Lonzi. Alongside there are some passages from Elsa’s degree thesis, in which she, through various studies on the body, theorizes the “disability studies”. Pieces of which I was particularly impressed with the phrase “if the rose lost its name, would it still smell good?”.

Then there are the photographs by Astrid Ardenti, taken in Argentina, in 2019, in conjunction with the birth of the collective Ni Una Menos. These black and white shots show the great visual impact performances that took place in the squares and the streets of the South American cities to request the recognition of the fundamental rights of women, in countries that are still so negligent.

Then there are the works by Vincenzo Cuccaro who, with a very subtle irony, aim to cancel a toxic masculinity, for example by representing, with graphic works, Mister Olympia Arnold Schwarzenegger who, with the addition of a “ə” on the abdominals and pubis, loses the symbols of his sexuality in favor, instead, of a less clear-cut and more fluid division of the gender.

In conclusion, it can be said that the exhibition was a great success and demonstrated the very actual need to discuss similar issues, specifically in a small provincial town like Vigevano. Furthermore, this occasion allowed to relaunch the town as a potential promoter of new cultural events, since, despite the fame it had acquired in the past, thanks to the illustrious figures of Da Vinci and Bramante, Vigevano has no longer been able to present itself as an attractive place where investing for culture. The real purpose of the exhibition was actually to promote an openness in a place where mental and physical closure is a constant to live with and to which survive. 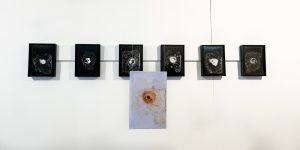 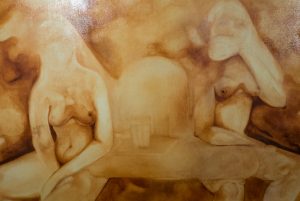 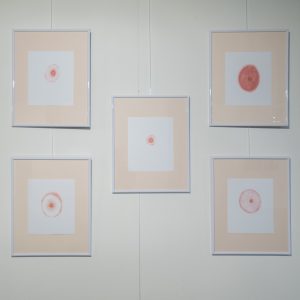 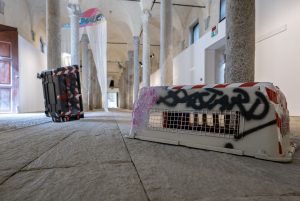 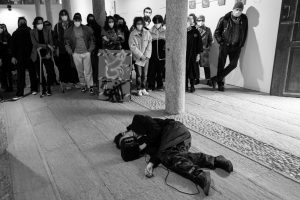 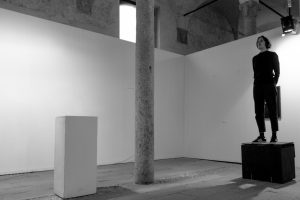 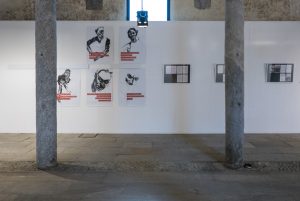 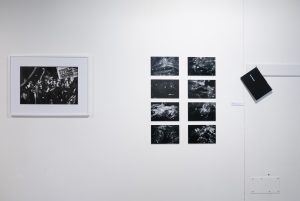 Curator and contemporary art critic, she works in Milan. She graduated from the three-year course of Economics and Management of Cultural Heritage and Activities at the Cà Foscari University in Venice and the two-year course of Visual Cultures and Curatorial Practices at the Brera Academy of Fine Arts in Milan. She is currently a contributor for Exibart and Juliet Magazine, of which she is also a web editorial assistant. She is also co-founder and treasurer of the cultural association Genealogie del Futuro. Her curatorial research focuses on redefining the relationship between contemporary art and society, especially within the public space.