The Squares of Italy by Pietro..

The American writer Keith Haring’s metropolitan ideograms showed stylized characters in endless energy vibration that instinctively depicted the great themes of the human being, such as love, death, life, fear, and peace. His Radiant babies (men who radiate) and the Barkings dogs (dogs who bark), cells of a continuous and unmistakable graphic flow, have invaded walls, car coaches, vinyl tarpaulins, paper, plastic recovered from waste and canvas in many cities of the world. His novel visual language pursued a model of “art for all” and the desire to engage as broad a public as possible, taking art out of museums and galleries and ignoring market-imposed rules.

These values are also expressed by Earl Rina‘s watercolors, which grafts reminiscences of Fernando Amorsolo, the undisputed pioneer of painting in the Philippines, his home country, and dreamy atmospheres in which the memory of Marc Chagall lives. Earl Rina grew up in Cebu City, elected by UNESCO as a creative city of design, and now stabilized in Winnipeg, MB (Canada), where he joined a composite network of creatives from various disciplines. Nature, landscapes, animals, and flowers are an inexhaustible source of inspiration for him. They become a pretext for joyful adventures in the color in which real forms of partaking seem to explode their usual borders to fragment them into a scattered cloud of color blown like fog or as solar luminescence. His freedom of sign and invention stems from the need to narrate to make visible the coexistence between dream and reality, both made of evanescent textures like the halos of diluted pigments in the water that encounter the paper.

His figurative research seems to follow the traces of the most ancient communicative signs of man: hieroglyphics, ideograms, and stylizations that spontaneously return to build the contours of his characters, vibrant with contemporary energy like Keith Haring’s creatures but animated by an inner musicality that resonates with the world’s universal yearning. This ubiquitous musical lyricism, which involves both line trends and color harmonies, is filled with playful irony and gives an image and rhythm to the daily and perennial story of the man in search of his (individual and collective) destiny and his history. Therefore, Earl Rina’s dancing silhouettes are not abstract apparitions that have fled or projected beyond the threshold of reality, but expressions of the most real and truthful essence of life. In these apparently naive visions, the artist tries to cross the knowledge and the unconscious to harmonize them in a narrative where the sign becomes the word and the image by creating rhythm and space together.

It is difficult to guess (or perhaps it is not even necessary) whether color governs the painter’s hand and mind or vice versa, so much so that his images appear harmonious and natural. The characters are fully integrated into their host environments, to the point that they seem almost genuine emanations of the enchanted beauty surrounding them. Having a naive and pure look at things without pretending to understand and govern them is an ancient gift, not highly valued in western society, and few in our day and age manage to maintain it while remaining firmly anchored in contemporary society. Earl Rina is one of them: his talent for color transforms the urban and natural landscape with the same enthusiastic curiosity, and his rainbow palette gives fairy tale tones even to the most ordinary circumstances of everyday life, such as a meeting of people in a cafe or a dog squatting at the feet of a woman in search of a caress.

The real plan happily slides into imagination without the need to invent anything, with no Pindaric and artificial misunderstandings, by merely letting the painter’s pure gratitude expand on canvas to be alive and connected with his emotions. No character of his paintings is alone on the scene because, as we taught as children, no joy is such if it is not shared: Earl Rina’s creatures of light also reiterate with a conviction that appears as agile human silhouettes surrounded by trails of nebulized color. These fluid brushstrokes seem to perform a dual function. On the one hand, they extend the ambits of the figures by suggesting the trends and directions of their movements, on the other they allow us to visualize their feelings (of which the movement is the direct emanation) and act as a link with the landscape, in a refined game of mutual reflection. The relationship between line, surface, color (to speak of the primary elements of pictorial language) and then between figure, background, and atmosphere (to move to the hierarchically more complex level of their combinations) is based on musical balance rather than on visual rules, and that’s why the animation of the characters is immediately read as dance. 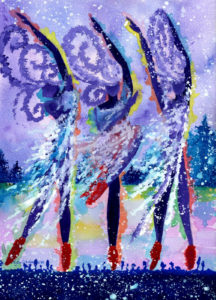 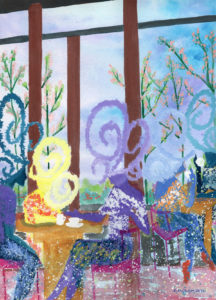 There is no distinction of style and substance between the natural and urban landscape; everything seems to blossom in an eternal spring of the heart, even when the snow is perceived beyond the window. The light appears diffused, fabulously independent of any real light source, as if we were looking at the world through a magical rainbow filter. Still, at the same time, it accurately recalls seasons, hours, and real atmospheric conditions, in an explicit invitation to pierce the veil of the habit to notice small miracles that happen just beyond the field of vision of our attention. Earl Rina’s paintings do not want to surprise and convince with the arrogance of a positive thought at all costs but want to make us rediscover that childish sense of wonder that once we all felt in front of something and that our society tends to silence because slow, non-utilitarian and incompatible with the contemporary mantra of optimization. Here, too, a not-so-popular value today in the strategic sophistication of the art system, which could be taken into consideration in order to bring art closer to a broader and more lively audience.