Among all the exponents of the movement identified as Pop Art in America, Robert Indiana (1928-2018), is the one who most explored the visual potential of short, strong and iconic writing of commercial art in the years of American economic miracle. While Andy Warhol focused on the initial input that industrial brands gave to people’s imagination and vision, Indiana redeemed the concept behind (or in front of) the advertising message, translating the slogans into existential messages. He focused on what most struck the observer in the great American spaces, such as the massive lights of the city or the more sparse ones of gas stations scattered in thin air, and their ghostly logos.

His favorites were motel and restaurant signs. Theirs luminous enchantment was that of the American visual society, the one always racing against itself, strained in an effort of compulsive humanity. And if we think about how the obsessive American horror vacui has infected our conscience in literature and cinema, we can realize how pervasive the works of Rober Indiana were for the visual experience of those who subsidized him or the trendy panorama[1] that discussed about his works. The artist proposed himself within the ‘hard edge’[2] current, that is, the abstract current that applied rigorous control of forms (also called geometric abstractionism), even if he differed from other colleagues in his approach to the formal syntax of advertising. What was passed through the marketing channel in those years was what the average American wanted to be (we had, using a fictional term no longer in vogue, a flashback to this social indoctrination in the last 40-50 years).

Become who you are. Nirvana in the nineties took up this Nietzschean step, already misrepresented in the years when Indiana made an advertising slogan a western style haiku. And from there we need to start again, bearing in mind how much the artist was actually consistent with the rejection of figurativeism; while Warhol expressed trade as an end in itself, the almost dying replica of a concept, Indiana knew how to conceptualize[3] it. Indiana almost always used short verbal forms, with words of three to five letters maximum. In EAT / DIE, the slogan becomes a ‘visual noise’, a real all-encompassing word that prays to the viewer’s gaze. He manages to be a precursor of the anarchoid motto produce-consume-crack, reported so often in murals and vandal writings, whose background has its roots in that vision of anguish that consumer society has brought as its greatest gift to buyers.

The artist admitted that his slogans soon became clear acceptance of the message, rather than social denunciations. If in the first works there was a stylistic reasoning oriented towards social criticism, and the making of the consumer society a critical objective, at the end of his career many interpretations changed. For many critics he had now identified himself with the advertisement itself. He said on one occasion that ‘his understanding can be as immediate as a Crucifixion. It is not the Latin of the hierarchy, it is the vulgar[4]‘.

[1] He was also hired as a stage designer and costume designer.

[2] Art movement inspired by the works of Mondrian, Kandinsky. It will differ greatly from the figurativism that was in vogue at the time (Pop Art).

[3] Famous is the work Love, still used today in many visual contexts; the word ‘Love’ is celebrated here as a graphic-formal element without being investigated. We are not talking about ‘love’ in a romantic or intellectual sense, not even in a cinematic way; here we witness the total elegy of sign, color and the synthesis of words-images. 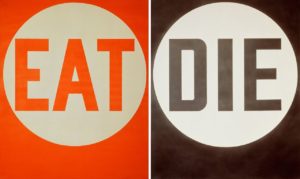 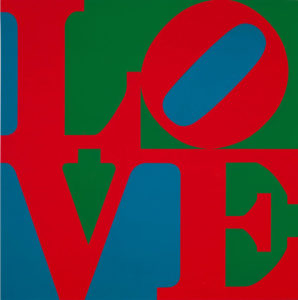