A political statement by BRACE..

Despite the restrictions due to the pandemic, the exhibition program of Gaggenau DesignElementi Hub Milano continues, developed in collaboration with Cramum and animated by the desire to connect with contemporary art through exhibitions of artists engaged with different media and themes. On December 10th, Elena Modorati’s solo show entitled “Resti” (Remains) and curated by Sabino Maria Frassà was inaugurated with a live streaming digital vernissage. The exhibition will be open to visitors by appointment until February 26th, 2021. The project ideally concludes the “On -Air” format conceived by Frassà himself and focused on the representation of time understood as the union of past, present and future. As we can immediately understand from the title of the exhibition, these themes are also central to the poetics of the Milanese artist, who creates works based on the patient superimposition of layers of wax, silk paper and rice paper that preserve and hold fleeting objects, drawings and handwritten words. Her reflection, as the curator’s critical text underlines, focuses on the ambiguity of human existence poised between the finite and the infinite, between uniqueness and transience, and addresses the acceptance of the dispersion of individuality in the infinite of time in the trust that, sooner or later, the deeper sense of what we have been may re-emerge.

Emanuela Zanon: In your biography I read that you graduated in philosophy at the University of Milan. How has this cultural formation influenced your creative practice?
Elena Modorati: Theoretical training inevitably affects work, but it somehow constitutes a parallel activity: there is an internal awareness of doing, with its own mysterious logic, which is, for the purposes of art, much more crucial. The theoretical part of conceptual re-elaboration always intervenes when the process has already started and, above all, a posteriori and becomes an element that interests me as much as the operational dimension, because it is a gnoseological tool. My training and years of “practice” then provide me with those tools for (re) reading, that awareness that allows me to keep a high level of vigilance on possible vices and drifts.

The essential component of your works, which you divide into Scriptures, Landscapes and Objects is wax, a living, transparent and extremely fragile material. What meanings do you attribute to this material and for which visual and tactile characteristics does it fascinate you?
In “Resti” wax is not the only material: half of the works on display are made of paper, metal and, for the first time, clay. However, it is true and undeniable that wax has greatly characterized my artistic research since 2007. The choice was born out of a banal visceral correspondence and for an equally banal purpose, namely to veil the writing. In reality, over time, the work has shown me a density of meaning that I had not foreseen at all. In fact, wax works like a fog, or rather like a diaphanous membrane: the surface after being smoothed and polished takes on an epidermal appearance, which, interacting with the light, blurs the boundaries. In fact, on the one hand wax reflects and returns light to the environment, on the other it absorbs and houses the light: the individual tablets are called Stanza (Room) precisely because the wax suggests a depth, a breakthrough, even a sort of attractive polarization, a suction, inside. Therefore, from a merely physical point of view, a mobile or ambiguous relationship is established. This ambiguity is, conceptually, the central point of my research: for years I believed I was working on the limit of knowledge, on the impossibility for thought to make the opacity of reality transparent. Wax, in fact, is emblematic of this opacity and, at a certain point, it showed me how I was mistaken in perspective: the fog, the “membrane” that envelops reality is not an impediment but a means, a connective tissue of which every what is part, which, indeed, substantiates everything; not a veil to be torn off but a vital interstice thanks to which every singularity is a bond, ecstasy, and also a living change… In short, the wax has highlighted the centrality of the relationship and unmasked the concept of identity.

The series of landscapes entitled Capricci is composed of minimal compositions of ruins that sketch environments on wax pedestals. Here the figuratively transient elements – the ruins – are made of both wax and durable materials, such as marble, plaster or stone, while the bases that should eternalize their fame are made of soft wax. What would you like to tell us about it?
The Capricci, as the title mentions, are fantastic landscapes with imaginary ruins; the effort is that the Lilliputian dimension – I have a passion for miniaturism, as well as an archaeological one … – nevertheless manages to constitute itself as a place, even if only in the mind. This seems to me to happen thanks to a device, namely the connection between the “ground” (the base) or even the level of the horizon, and the “buildings” or, more simply, “emergencies”. In fact it is still the figure-background or environment relationship, essential precisely for a place to “happen”. As for the materials, there is no hierarchical distinction, only a game of mirrors, mimicry and ambiguity … a concept that actually comes back frequently in my work. Then the work lives in the eyes of the viewer and even this question about the wax foundations fascinates me and makes me think. In any case, after the first examples made in 2018 (ed. Also on display “Scavo”, an unpublished work in black wax made in 2020), I realized that the Capricci reflect and manifest Benjamin’s idea that the present is actualization of history and that the red thread is not so much in the elements that persist as in their gaps, spaces of desire and possibility. It is no coincidence that this body of works is central to this exhibition which is part of the “On-Air” cycle conceived by the curator himself (Frassà ed) to reconsider time and its interaction with human history: thus the Capriccio entitled “Rocchi” which presents impossible remains of columns in plaster, wax and limestone was deliberately placed by the curator in front of a fake brick wall that characterizes the Gaggenau space. Art, through a fiction, makes us perceive the true essence of time.

The concept of time seems to be transversal in your work, as it also emerges from the role of writing in your works: you often notice thin sheets of silk or rice paper immersed in thick layers of wax, at other times covered by other layers of paper. They compose a sort of diary, the reading of which is forever forbidden both to the spectator and to the author of the words. Nonetheless, in the succession and composition of these individual pieces and also within each of them, an underground temporal scan is perceived that continues in addition to the finding of the impossibility of reading. How do your works relate to the dimension of time?
Writing itself gives a rhythm and determines a scan of space (the sheet) and time (the “progressive” time of writing). The handwriting, then, is a tale, an intimate story, while the birth of history is identified with the advent of writing. Above all, writing is transmission but, like the lacunae of Capricci, the wax and the glazes silence the noise. Writing is me reduced to a trace, a buzz, a phantom word. Where does this word without belonging come from (not only the “who speaks?” is irrelevant, but the word no longer belongs to itself, it becomes blurred, transfigured…), or, it is identical, where is it disappearing? The intimate time and the codified time are paradoxically overlapped in the exhaustion; one senses the “on-air”, a third time, an out-of-time in which the past-present-future arc is condensed and canceled together. The central “gallery” within the Gaggenau space thus welcomes five works from the Calendari cycle, which I began to create in 2013: thoughts, intimate and personal reflections are collected in a diarist manner and then hidden from the public’s reading, but also from the my memory. Writing becomes a pure “sign” of an intimate experience that is necessarily “chronological” that I share but never show off in a pornographic way. This inability to open the boxes of these works – inspired by the “advent calendars” – also recalls the theme of time as waiting: it is the mystery of reality that constantly surprises us and it is perhaps a mistake to try to anticipate it. So yes, time is inevitably one of the themes of my work.

Is the spark that gives you the first inspiration when you conceive a new project a word, an image, a shape or a concept?
Projects arise from different occasions, anything can work to set the process in motion. Of course, over time I realize that the issues around which the work revolves are always the same, in a kind of encirclement dance, in which I seem to focus more and more, but maybe it’s just that you change perspective, frame, and in some way the results are also valid all for themselves, for that specific perspective, for that moment, and as a whole, as a discontinuous chain … Of course, as I mentioned at the beginning, that when it comes to matter and space so many thoughts are put out, it is another kingdom, and the image, the form, with an archaic, elementary, bodily result, lead the game.

Your works are sensitive devices that invite meditation and communicate at first sight impressions of harmony and pacification. However, on a more prolonged glance, under the thin skin that encapsulates the surfaces, you can feel the stirring of tensions that could subvert the formal balance at any moment. Is the unexpected an emotion or an event for you?
My work continually encounters the ambiguity for which it fluctuates, it is tense, and yet also registers a dimension of point-like absoluteness, ephemeral, even magical. The unexpected is everything, because it is the unprecedented, therefore the real, always. 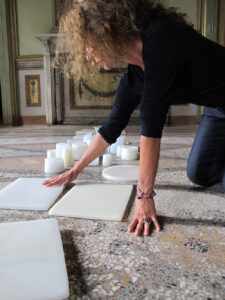 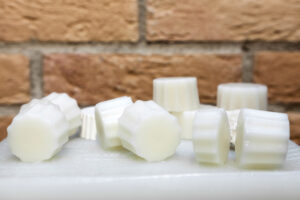 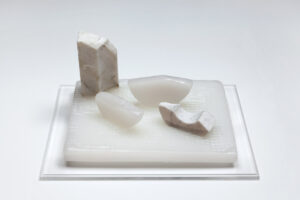 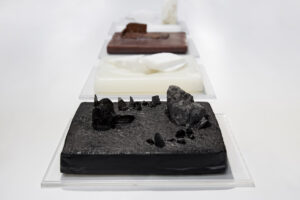 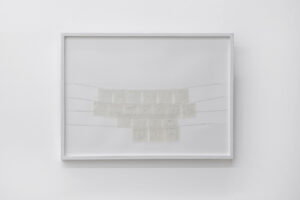 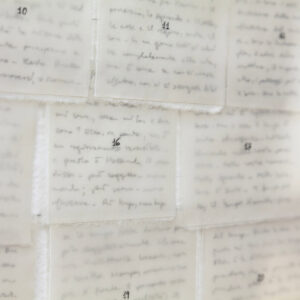 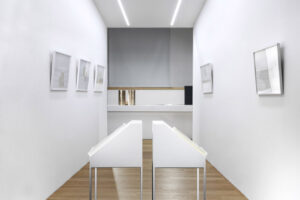