The ZigZag Protofilosofia by I..

The artist Esther Kläs moves in the footsteps of the German artist Eva Hesse and, more generally, in the wake of the post-minimalism of the 60’s. Born in Germany, but artistically settled in Barcelona, Kläs is the protagonist of the exhibition Maybe it can be different, curated by Adrienne Drake, inaugurated on 13 February at Fondazione Giuliani in Rome.

Among sculptures, oil drawings, films and wool tapestry, the corpus of works, designed specifically for the space of the foundation, transmits to us the aesthetic sense of the artist in all its fullness, ranging between experimentation, emotion, elementary structures and gestures. The exhibition is the artist’s debut in Rome and catapults us right from the start into what we might call a ritual, the artistic ritual of creation, which is concretized in the presentation of totemic elements, central pillars of a confrontation and reflection space.

Kläs transports us at the exact moment of creative genesis, a genesis that becomes the foundation of the artistic act that is completed in full autonomy. As the artist explains in an interview with the curator: “I start and then it goes, it continues”. There is no premeditation, but only and exclusively the freedom of the artist to create or only to think.

The physicality of the work is not meant to present us a finished work, but to fuel a process of meditation, a process of exchange, whether emotional or critical, with the viewer, with the human element with which it collides. The space becomes, therefore, a moment of sharing between the gesture of the artist, well represented with handprints on work, and the other look, the spectator’s gaze. Kläs emphasizes this relationship by proposing to the viewer her own point of view at the time of the creative act, putting the works at the same height as they were worked at.

We therefore find works, such as resin sculptures, raised on pedestals or aluminum sculptures hanging from the ceiling; in continuous relationship with the aesthetics of Eva Hesse (remember one of her most famous works, Hang Up) Esther Kläs also carefully reflects on the positioning of the work, experimenting with forms of emotional languages, sensory exchange, recreating a space of uncertainty and temporariness, but always in full expressive and aesthetic freedom.

In the same interview with Adrienne Drake, Kläs explains what she seeks with her art: “The first answer is freedom, but also the conclusion after a long answer would always be freedom. There is no definitive search for something particular, it is a path in which I find myself.”
In addition to the sculptures the artist also presents us some oil drawings that, like the sculptures, work almost like imprinting, they are the physical making of a gesture that, however, has yet to be definitively fulfilled. Only through the mediation of the viewer it will become something new, an element that will individually assume different expressions. The whole exhibition is pervaded by this close interrelationship with the viewer who is invited to follow a path that unfolds between the various works and to become himself an integral part of this ritual.

For all the images: Esther Kläs. Maybe It Can Be Different. Installation view at Fondazione Giuliani, Roma 2020. Photo Giorgio Benni 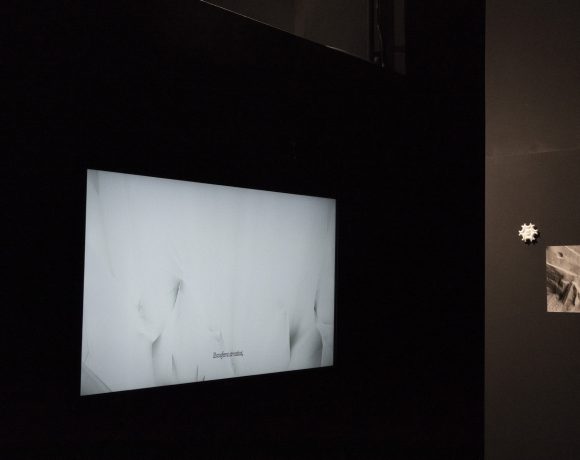 I was looking at them and I was just eyes. Looking beyond the human between the caves of the moon