In conversation with Elena Ver..

Marktstudio is a project that was born within the premises of “Il Perimetro dell’Arte”, a laboratory and shop of frames in the district of Bologna called Manifattura delle Arti. It aims to investigate the internal short circuits to traditional concepts of space exhibition and sales, through the new MERCE format, a different mode of use that is added to the canonical one, on the left wall and in the shop window / laboratory.

Fabio Giorgi Alberti, born in 1980, was one of the first artists to experiment with this new type of setting. The artist made use of different forms of expression such as: film and video, sculpture, words, painting, drawing. His research aims to investigate the language and the relationship of the individual with reality through works characterized by an ambiguous simplicity. Together with him we talked about his research and how he dealt with the choice of works for the new format of Marktstudio.

Valeria Fortuna: What artistic research is hidden behind your works?
Fabio Giorgi Alberti: My research tends towards simplicity and immediacy, with an evocative purpose. I think the first aspect of reality that we perceive and see is simple and direct, even quite clear. Things get confused when you start thinking about what use, what purpose they can have, what utility, or even what harm, they can bring. Everything becomes complicated when a future vision is projected. My works live in the present moment.

What was the work in the history of art that most shaped your research and brought you closer to contemporary art?
I had a series of epiphanies with the idea of ​​art, which I remember clearly. The first was a visit to Bologna, during my childhood, alone with my mother: she took me to see the Morandi museum, it must have been in the late 1980s, I was still in elementary school … were the ease of the subject, the wonder, but also the mystery for what is within reach, attainable, but also very indefinite. Then in Sansepolcro, in front of the Resurrection by Piero della Francesca, I was about 13 years old, an older boy with more experiences brought me there: we remained in front of the fresco for hours, in which the fact that he remained to watch, led me to contemplate in my turn and to seek, to seek, to seek. The third was in London, the Tate collection, I had just started studying at the Academy: a video by Bruce Naumann on two superimposed screens, double no, in which there are two jesters, one per screen, one in green the other in red, jumping in a mirror image screaming or grumbling no no no no, endlessly. And then Duchamp’s urinal: not in front of the work, but in front of thinking about that work.

What does the symbolism of the double refer to within your works and where does it originate?
The works that I have exhibited in Bologna are a concretization of the multiple, rather than a symbolism. Let’s see with two eyes, it is then the head that brings the two images together into one. I have always worked a lot with mirrors and with mirrored images. With an illusory reality, perhaps no more than our real one. A front and a back that can be a back and a front. We see moments that follow one another, space one moment after another; it makes me think of the frames of a film and when there is that adjustment of the projection whereby you see the same image in double.

How do you choose the materials and which objects do you prefer to create your works? Do the common objects that are taken into consideration have a precise meaning?
It often happens to me to set up exhibitions of other artists, to help them in the final part of the installation: using ladders and extensions, at the end we drink a couple of beers in makeshift glasses. I believe that the materials and subjects that an artist uses and represents always have to do with his life. The tension is to absolutize, to universalize; but it is from our own experience of the world that thought starts. In sculpture, materials have the possibility of corresponding to what is represented, it is a redundancy between media and representation, between signifier and signified. There is also a real fascination that I suffer for some materials and techniques: when I use iron, it is also because I like to cut, fold, weld it, I really enjoy it; when I make mirrors, it is also because it fascinates and absorbs me to see the chemical reaction; when I paint with the fresco it is also because I think of the pigment that is fixed without media.

What sensation would you like to arouse in those who observe your works?
I would like to instill doubt, doubt about the existence of things, about the real form of reality. The question is: where does the world stop and where does our projection onto it begin? I want the vision to be simple and direct, but to give rise to the desire, the need for a second glance, a second moment of vision; I want to have a better look at the things we take for granted.

In relation to the MERCE exhibition, which recently ended in Bologna, which works did you choose to place in the gallery spaces and how did you decide to use the left wall and the showcase of Marktstudio?
I have chosen objects, or representations of objects, which may well be present in a shop, or in general in a workplace: a ladder and an extension that were used to make, a beer and a glass with which one drank afterwards.

Have you imagined a relationship between the work and the way the exhibition is used? Have you chosen certain works to be able to involve the public and invite them to enter?
The exhibition focused on subjects that we automatically recognize, about which we do not ask particular questions. Of course in the case of bottle drawings, we immediately understand that they are drawings. But the ladder, the plastic cups and the extension, with small differences, are like this in more or less all homes, in Bologna as in Shanghai. The mechanical repetition that I have created highlights an automatic vision that we often put in place, and allows us to go back to looking at everyday things and notice small differences. 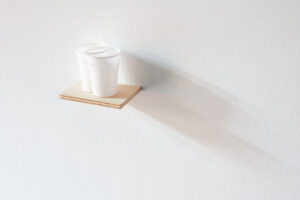 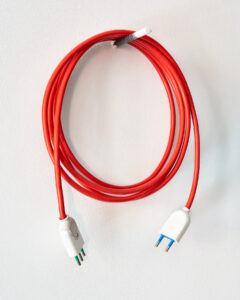 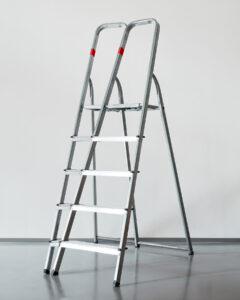 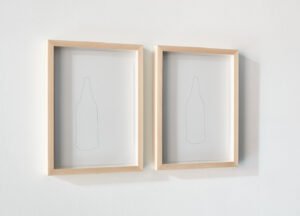