Our modern times: some reflect..

With Truly, the exhibition curated by Enrico Mattei in collaboration with Galleria Poggiali from Florence, Pietrasanta brings in the most symbolic city’s spots the territory’s excellence: the marble. Almost twenty works of art by Fabio Viale (Cuneo 1975), who is linked to the Apuane Alps and its caves since his childhood, will pay homage to it. The sculptures will be exposed in the Piazza Duomo, the Sant’Agostino church and it’s cloister from the 27th of June until the 4th of October.

Can marble be as light as paper, as thin as wood or as heavy as steel? Yes, through the hands of Fabio Viale. The marble block is his white canvas from which he starts working, shaping it and reaching such exceptional results that those who look at his sculptures often doubt on its physical properties. The title of the exhibition itself can be read as an invitation towards the visitors to look at marble without preconceived notions, despite the appareances. Hence, we should not be surprised if the marble bags called Arrivederci e Grazie (2012) on the church’s stairs look like they are made of paper, or if the fruit’s basket Stargate (2017) in the church’s central nave looks like it’s made out of wood. For this one, Viale used a unique marble block which he later emptied from the inside in order to make it walkable. From this characteristic comes its name, that recalls the possibility of a passage, a gap that leads to a new world.

Continuing walking in the the nave’s dim light we then meet Le Tre Grazie, three women from the Ghardaïa, an Algerian city that the artist met in one of his many trips. Viale is able to render realistically on the marble the drapery’s movements of the hàik, a typical white dress made out of linen or cotton worn by the women that usually covers all the body except one eye that is left uncovered. The artist’s choice to represent the Berber’s traditional veil is in order to underline the theme of individual freedom, freedom that today, in times of forced isolation and limitations due to the current pandemic, is more than ever felt as important to preserve. Iin this way, Viale creates a link between the secular religious traditions and the nowadays behaviors that are part of our new everyday life. Even the marble sculpture Aereo (2015) inside the church’s apse looks like it’s made of paper, together with the Aerei in front of two mirrors in Sala del Capitolo. In Sala Putti are collocated La Suprema (2014), another “wood” basket in colored marble, Orbitale (2017), a “rubber” tire made of black marble, the Venere Italica (2016), ll Vostro sarà il Nostro (2017), a fist made in colored marble (or rather a tattooed fist), and on the garden Flat Line (2006), a “steel” beam made in white marble.

In Piazza Duomo there are the series of the tatooed marbles (2020) like the Souvenir David, a monumental hallow face on which the artist experimented for the first time this new type of coloring, the Venus, the Laooconte, the Torso Belvedere and the Torso that was made in collaboration with the creative director Marcelo Burlon. The sculptures, which were thought in dialogue with the city’s monuments, are copies in scale of the original works of art that the artist colored with pigments that penetrate in the marble like tattoos penetrate in human skin. In this way, Viale creates a link between human beings and some of the most important history of art icons, confirming their immortality. The ancient work’s iconography, that are rooted in the peoples’ imaginary from centuries, is seen in parallel to some of the iconographic tendencies in the contemporary tattoo world, including the images that come from the Japanese or South American criminal scene and the Old School Tatoos.

Furthermore, on the Marina di Pietrasanta pier’s square, yet another work of art in marble, as if the artist’s will was to bring the material back to where it used to be exported in all the world: the sea. 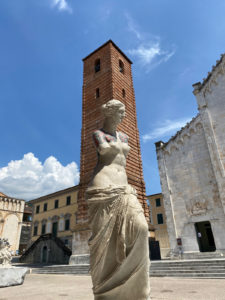 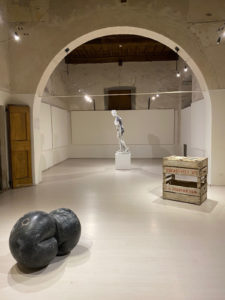 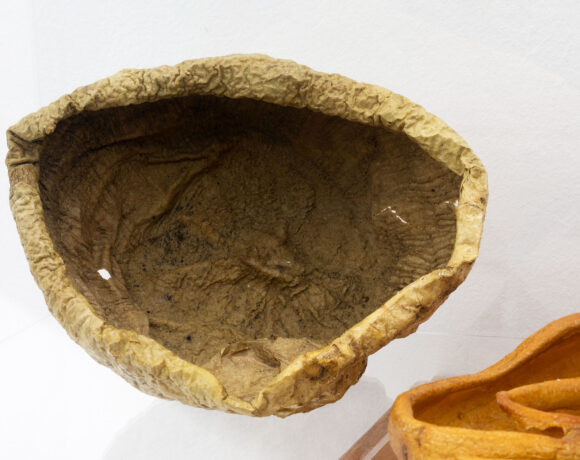