Fall, the latest exhibition at Istituto Svizzero i...

Marie Matusz’s exhibition at the Swiss Institute of Milan marks a twisted path that winds through dark cubes made of Plexiglas, sometimes tall and slender, other times bulky as sarcophagus. And just like sarcophagus, these dark showcases hide fragile shapes that resemble what remains of carcasses, they are objects that refuse to reveal themselves, hidden by display cabinets that have forgotten their function of exhibit the content in a visible and clear way. The showcase makes fun of the visitor and operates with a “visual filter” allowing him, or her, to barely see the content, to roughly grasp the shape and colors and, when someone tries, in vain, to put the face near the showcase, it returns the reflection of the visitor.

The artist’s reflections for Fall – title of the exhibition – started from a botanical specimen, the Victoria amazonica, cataloged by English colonists in homage to Queen Victoria in the 1830s. An aquatic plant native to South America, whose flowers recall those of the lotus, but mainly known for the large leaves that extend over the surface of the water for several meters and which in nature assume a behavior similar to the colonial thought that has labeled it. With its large leaves it aims at extending more and more pervading the surface until it steals light from nearby plants, leading them even to death. This species is a real obsession for the artist, at the point that the botanical garden of Basel, the city where she lives, has agreed to donate to her some specimens.

What fascinates Matusz about this Amazonian plant is rather an aspect that remains below the surface, hidden under the water: a rhizomatic structure that allows the plant to expand into a complex system that branches off and spreads nourishment from one plant to another, creating an interconnected ecosystem that is impossible to divide.

The Victoria amazonica in its propagation, seems to rebel against the colonists who gave it its name, inscribing itself in the postmodern concept of “rhizome”, formulated in 1980 by Giles Deleuze and Félix Guattari, and enunciated in six principles in the essay A Thousand Plateaus. Capitalism and Schizophrenia, in which the rhizome becomes the emblem of a new “acentric, non-hierarchical and non-significant” system – some of these principles were subsequently borrowed to develop the functioning of the internet network.

Matusz moves her artistic research following the mode of propagation of the Victoria amazonica and, at the same time, it employs it in her works as a relic to preserve its memory. It is dried inside one of the largest sarcophagi, whit the title of Coated in Compassion (2022), here the elements of the plant are combined with that of the thistle. The latter is another species that propagates through the rhizomes, and here it is featured as covered with a fabric which is stretched until it returns a plastic shape, then placed on a pedestal that reminds an altar.

Immediately next to it there is another sarcophagus, There is no document of civilization that is not a document of barbarism (2022), which hides a composition formed with the frames of a gutted piano, such as what remains of the carcass: in this way, artificial and natural mix together. Moreover, the long title of this work comes from Walter Benjamin’s essay On the Concept of History, written in Germany where National Socialism had taken over.

The visitor’s path inside the space, which is divided in two parts by a thick white wall, does not follow a precise order, it is a coming and going; in a confused and messy choreography one wanders among the showcases, and this time one can see two close totemic displays certainly taller and thinner than the ones before. In one of them there is a mechanical skeleton, treated by the artist as if it were exhibited in a science class of the future, and in the second case a barely audible poetic composition, created in collaboration with the pianist Hanna Syrneva and the artist Semuel Lala, emits. Poetry, like the Victoria amazonica, becomes an integral part of the artist’s work, but the recited verses are suffocated and hidden by the showcases.

Crossing the thick white barrier that splits the space of the Istituto Svizzero, the visitor passes from a narrow space where he first met the five dark windows, to a room that is suddenly half-empty, where the sudden removal of the previous chaotic elements appears forced and generates a sense of absence. At the center of this new environment there are ten glass surfaces stacked one on top of the other, in which one can barely notice a rectangular incision designed on them by the artist that evokes the object that once was placed on that exact point of the glass. In All systems create the conditions of their own demise (2022), the object, unlike the other section, is not present: only the private and faint remembrance of the artist can return it back through an incision. 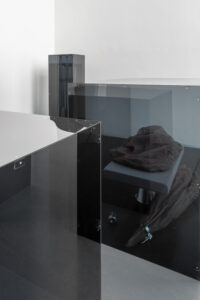 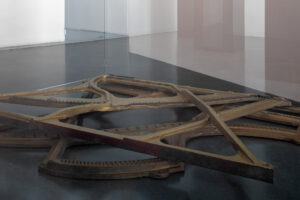 Marie Matusz, There is no document of civilisation that is not a document of barbarism, 2022. Ph. Giulio Boem, courtesy the artist and Istituto Svizzero, Milano 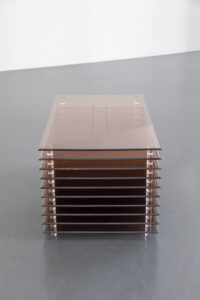 Marie Matusz, All systems create the conditions of their own demise, 2022. Ph. Giulio Boem, courtesy the artist and Istituto Svizzero, Milano