In conversation with Melania R..

“S-COMPOSIZIONI (S-COMPOSITIONS)” is the title of Francesca Piovesan’s solo exhibition at Gaggenau DesignElementi in Rome, the last stage of the “EXTRAORDINARY” cultural and artistic program conceived by Cramum (non-profit project for art in Italy) in collaboration with the German design brand. As explained by the artistic director of Cramum, Sabino Maria Frassà, curator of the exhibition, “all the work by Francesca Piovesan has the epidermis as a common denominator, that external covering of our body that contains, separates and puts us in relation with what is different from us: from the first photographic works of comparison between her own body and that of his grandmother, to the works on women’s scars – “Uneasy” – the artist has always captured in her works the changing of the skin over time. It is therefore in what inevitably changes that the artist seeks the essence of being: a form in transformation”. The biological-existential investigation of the artist, recently selected to represent Italy at Bornholm’s Biennials for contemporary glass and ceramics, is expressed in the production of photographic maps of bodies, created through specific off-camera photography techniques hybridized with performance and sculpture, in which the obsessive decomposition and analysis of enlarged fragments of human epidermis tries to go beyond the limits of the physical body to represent the essence of being.

The ” S-COMPOSIZIONI” exhibition traces the evolution of Francesca Piovesan’s poetics starting from the iconic glass sculptures in which the footprints of some fragments of her body appear trapped, to arrive at the new cycle of works “Aniconico”, a series of mosaics on paper whose pieces are impressions of the artist’s epithelial texture obtained through the photographic development of prints left by her body on adhesive tape. The scotch, in which the salts and fats present on the epidermis with which it came into contact remain incorporated, is here processed as if it were a photographic film to give rise to a sort of analogue transposition of the body through the reaction with silver nitrates. On the one hand, therefore, the elusive time yet fixed by the photographic shot, on the other hand, the skin as a spatial surface, labile and changeable, which interposes itself between an inside and an outside: these are the two aesthetic coordinates within which the work is articulated by Francesca Piovesan, to which the abstract perfection of the geometric composition of the mosaic is added in the most recent works.

The theme that imposes itself in the convergence of these apparently unrelated approaches, but in reality united by the fact of finding their own intrinsic substance in a latency that becomes matter, is therefore the fragile precariousness of the human being, investigated on a scale that we could define as minimalist, as it is confirmed by the use of very poor and crude materials and techniques, such as salt and fats taken from the epidermis or the adhesive tape that incorporates them. The complexity and precision of the artistic gesture thus carried out lead, however, to question the significance of its significance which transcends any minimum and detailed perspective. To be targeted is in fact neither more nor less – as noted by Frassà – the ultimate essence of what we are and its incessant alteration. An alteration that produces a dynamic of which art itself can become the protagonist.

The peculiarity of this exhibition, compared to the artist’s previous works, is precisely the reason for the decomposition of the original image into fragments and their recombination as mosaic tiles. The resulting almost kaleidoscopic or surreal geometries, which echo even the most ancient and traditional ornamental techniques, seem to allude to another modifiability of the human being. A modifiability that transcends the purely physical one. It is therefore art itself that is summoned as a possible, not secondary, architect of our destiny.

But to distract from the temptation of any speculation on this aspect, we must remember that the artist wanted to include these works in a cycle significantly defined as “Aniconic”. Despite the rigor of the forms (for example without any concession to roundness), despite the reduced chromatic variety (never exceeding a range between black and white, between ocher, pink, mustard) despite the evanescence of the figurative representations (contained in fleeting and not always recognizable traces), there is no symbolism to be traced as a key to reading. Everything that could be interpreted as an icon is emptied, deprived of any evocative function. In fact, all that remains is to look at these works in all their dynamic instability, between a memory at risk of dissipation and a projection towards an enigmatic elsewhere, of which Francesca Piovesan makes us sign with restlessness, but never overwhelmed by anguish. A sign from which the attentive observer cannot help but feel challenged and confronted as when he is faced with something as elusive as it is essential to his/her own being.

For all images: courtesy the artist and Cramum 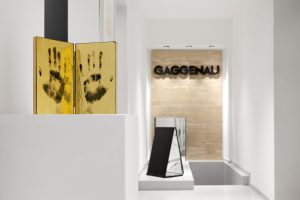 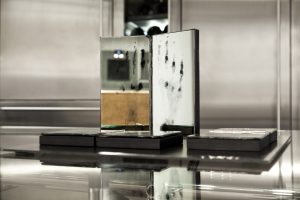 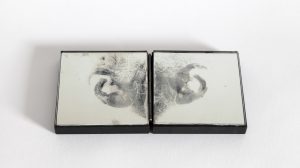