Signs of The Times | Joël And..

Francis Offman. Painting as a biographical-environ...

Ubuntu, a lucid dream, at Pala..

There are still a few days left to visit at P420 gallery the solo show of Francis Offman (1987), a Rwandan artist who, after having studied Administration Sciences at the University of Milan, moved to Bologna to study painting with Luca Bertolo at the Academy of Fine Arts, where in 2018 he was awarded the ArtUp prize of critics during OpenTour, an annual event in which students meet the city showing the results of the research and creation work of the last Academic Year . In 2020 the artist was among the winners of the Nuovo Forno del Pane project, which during the months of the pandemic transformed the museum halls of MAMbo from exhibition spaces to places of interdisciplinary creation, hosting twelve artists, domiciled in Bologna and selected through a call. Each of them has been assigned a production space in the Sala delle Ciminiere, the museum environment normally dedicated to temporary exhibitions, closed to the public for a long time due to the restrictions imposed by the pandemic. P420 gallery, which has always been in close dialogue with the city institutions in its dual mission of enhancing artists from past generations not yet adequately evaluated by collectors and critics and to support the emerging talents of the territory, enthusiastically welcomed the painter demonstrating intuition and far-sightedness, since all the works on display (in addition to those presented at the Artissima stand last November) have been sold, including two that will converge in the collection of the Castello di Rivoli, which will also be the prestigious venue for his next exhibition .

Francis Offman’s paintings are not framed canvases with irregular outlines on which the artist juxtaposes flat and homogeneous chromatic backgrounds made with various techniques and collage inserts of other found or donated materials, such as fragments of canvas or paper, shreds and waste materials recovered in the Academy, old sheets, the tissue paper contained in the packaging boxes and the wrapping of common consumer products. The results of these manipulations, whose meticulous laboriousness is not immediately obvious if one stops at the lively immediacy of the whole, are powerful abstract compositions without a title that suggest the idea of ​​a map or a tribal tapestry, intentionally entrusted by the author to the free perception of the viewer without any descriptive or conceptual connotation that suggests an orientation. To delve into the artist’s poetics and language, it is necessary to refer to his biography and the consequent aesthetic, cultural and emotional implications that determined his perception of the world. First of all, childhood in Rwanda, and therefore the architectural and social contradictions of the cities where the skyscrapers coexist with the slums, the villages without water or electricity, the luxuriant vegetation, the mountains silhouetted against the sky and the tea and coffee plantations, managed in colonial times first by the Germans and then by the Belgians, on whose exportation still depends a large part of the precarious economy of the country, one of the poorest in the world. It is precisely the coffee, daily recovered from the moka pot and subsequently dried and sieved with a craftsmanship process that lasts months, the pigment from which that particular shade of intense and variegated brown is derived which constitutes the leitmotiv of many of his works and also the symbolic knot of intersection between his African affiliation and his current habits in Italy.

In a recent interview[1] Francis Offman said that most of the materials used in his works (except the glue with which he assembles them on the canvas) are given to him and must have a meaning: the most interesting aspect of this approach – which is free from a too abused correspondence between the withdrawal and the experience to which it refers as the founding reason of the work – in my opinion is the artist’s ability to synthesize in an abstract language, fully enjoyable as such even by those who do not know its origin, a complex jumble of environmental, emotional and political solicitations without claiming to legitimize the “specific artistic” with an ethically shareable message. It is therefore true that in the tears and graininess of his pictorial compositions live the wounds of a people divided into two ethnic groups who suffered one of the worst massacres in history, but also the inner lacerations of a young man whose father, a UN official in the field of humanitarian emergencies, had to move abroad because he was threatened with death, which led to the artist’s choice to study Administration Sciences in Milan in the hope of helping the development of his native country. But that’s not all. In the multiple material and conceptual levels that substantiate the works of Francis Offman, above all a powerful discourse on art emerges which, while feeding on individual traumas, cultural stratifications and identity contradictions that have marked his biography, manages to generate a body-painting of extraordinary intensity and coherence. 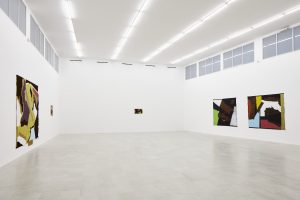 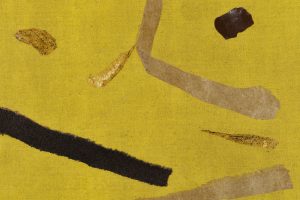 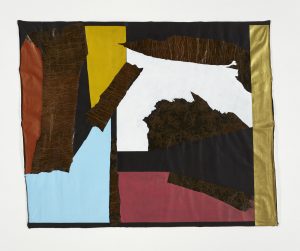 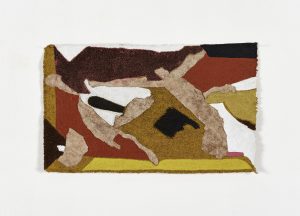