Ubuntu, a lucid dream, at Pala..

Franco Guerzoni and Lorenzo Modica. Nascosto in be...

The exhibition Nascosto in bella vista | Hidden in plain sight brings together at Studio G7 a selection of works by Franco Guerzoni (Modena, 1948), who is about to celebrate fifty years of collaboration with the gallery, and by the young Lorenzo Modica (Rome, 1988), who is making his debut there on this occasion. The theme of the comparison triggered by the different approaches to painting of the two authors is an elusive idea of ​​figuration, which both pursue in the volumetric and conceptual crevices of the materials they manipulate by implementing complementary procedures of stratification, abrasion, juxtaposition and interpenetration. The two artists appear interested not so much in the process of creating the image using the illusionistic tools of drawing and color, as in detecting its presence / existence as an unavoidable fact, regardless of the way it manifests itself.

At the center of the reflection addressed by this exhibition, on which the poetics of Guerzoni and Modica spontaneously converge, there is an attitude (that we could define sculptural) in search of the quintessential physicality inherent in the idea of ​​image as a (real) object of thought, which both seem to perceive as a fundamental mystery of artistic practice. Both, while considering themselves mainly painters, therefore operate at the borders of the pictorial process and construct the painting as a material and spatial development of an image, which in Guerzoni tends to be the three-dimensional projection of an original unity while in Modica it develops as an implosion of heterogeneous multiplicities in the one understood as simultaneous existence.

Guerzoni’s poetics has its roots in the dream of an irremediably lost past and in the survival of its traces, fragmentary like the wrecks of a shipwreck. Starting from the works from the early 1970s, created in collaboration with his friend Luigi Ghirri and which portray buildings in ruins and abandoned rooms, the artist interprets the photographic medium as a vehicle for images taken from reality, on which subsequent insertions of materials take place. The intent of those shots was to fix a physical trace that attested to the existence of places otherwise destined for oblivion, in which the signs of time were concretized through the addition of other materials, such as pieces of plaster and saline encrustations, or interventions that excavated the two-dimensional surface, such as splits and erasures. These works were an expression of the fact that, according to the artist, the power of photography resides primarily in the ability to activate an image by making it available for re-processing. During his career this visual philosophy of abandonment and ruin indelibly marked his research, which confronted the multifaceted pictorial history of the twentieth century by actively participating in the heated debates that periodically questioned the foundations of artistic practices.

In the 1980s, Guerzoni was fascinated by archeology, interpreted as a research and impossible reconstruction of an irretrievably lost antiquity and as a metaphor for painting. The large chalky wall papers belong to this period, inaugurating a new phase of experimentation on the surface intended as depth and layering of materials. The transition between the decade in which photography prevails and the following years dominated by the interest in color and matter is documented by the works from the Spia series, where slightly bumpy monochrome surfaces allow a glimpse of the underlying levels through gaps that reveal intense backgrounds of color or ancient figurations. On display we find a precious example of this cycle in the screen printing on a plaster plate entitled Iconoclast, where a small archaic face looks at us through a crack in the plate that separates its living space from ours. The elegant linear essentiality of the graphic sign that emerges from the gash in the pasty white that surrounds it preserves intact the emotion of a discovery still throbbing with life and fully manifests the artist’s sensitivity towards painting, understood as sedimentation, excavation and revelation of a fertile surface, inexhaustible generator of forms projected towards the third dimension.

In Intravedere (2021), a narrow gypsum cell from whose internal and external flaking surface the underlying red, purple and blue plasters emerge, the eloquence of painting dominates, the exercise of which resurfaces praised as the finds of the past that it subtly. The novel of memory can be read here in the traces of color imprisoned by the overabundance of white, which recalls the colors of the Pompeian decorations but also the lightness of the Rococo frescoes, while in the third work on display, Rêve Néolithique (2021), a three-dimensional rose of cards designed and worked with abstract motifs, the concept of memory is evoked by the imprints of mysterious lost objects and by the swelling of the pictorial plane, a prelude to other potential emergencies.

The idea of ​​palimpsest also recurs in the works of Lorenzo Modica, one of which (not present in the exhibition) is also responsible for the title Hidden in plain sight, which effectively summarizes his approach to painting practice and establishes an intriguing dialogue with the suggestions analyzed so far by Guerzoni. While Guerzoni places a concealment at the center of his work as a prelude to a subsequent and partial revelation, the young Roman artist plays on the coexistence of different kinds of figurative allusions on the same visual level, on which he arranges compositions of images made with different techniques, such as ink on canvas, collage, photo picks, oil paint or spray. The artist’s intent, particularly evident in this selection of works, is to explore the ambiguity of a painting which, despite being performed with tools not strictly related to it, continues to respond to the criterion of glazing, whose layering and blending generates the final image. The challenge in his case seems to be that of identifying a sort of illusive two-dimensionality which, despite having to do with the manipulation of materials with autonomous depth and reality, appears to be aimed at creating a perceptual and conceptual short circuit in which echoes and citations of the intuitions of the historical avant-gardes retrace.

In La Chacha (2021), for example, Modica superimposes on a starry surface (a tablecloth used as a canvas in which the Dadaist practice of taking from reality meets Pop aesthetics) rarefied expressionist brushstrokes and a page of a photocopied magazine of conceptual ancestry, while in the site-specific installation Untitled (showcase) (2021) two plexiglass plates placed on the wall act as displays for different types of papers that recreate a constellation of visual affection findings and abstract image hypotheses. To deepen the artist’s poetics, regardless of the theme of the exhibition, we suggest visiting the office adjacent to the exhibition hall of the gallery where, in addition to some works by Guerzoni (among which we point out the beautiful sculptures-capitals) we find three important paintings in where Modica applies virtuosic textures of color and signs to the canvas that generate mental landscapes in which abstraction becomes the matrix of infinite figurative potential. 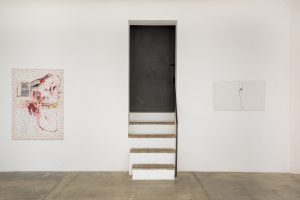 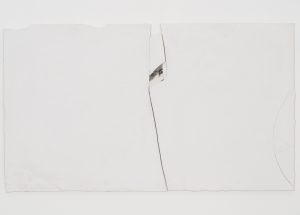 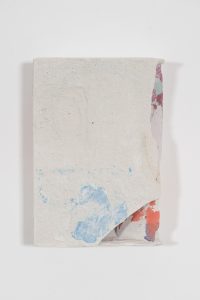 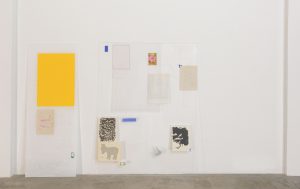 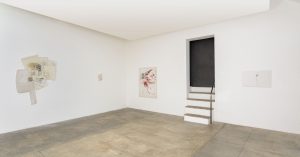