For more than forty years Franco Vaccari (Modena, 1936) has been one of the pillars of the contemporary Italian artistic scenario, for his revolutionary approach to the photographic medium and for the lucidity and clairvoyance of his critical reflection. With him, photography, previously excluded from official art, fully fits among the “institutional” creative expressions and its intrinsic specificities become new conceptual and aesthetic parameters. The automatism of the shot upsets the hierarchical relationship between author and tool, while its instantaneousness suggests the idea of ​​a new co-presence and collaboration between artist and audience. In the Maschere (Masks) performance (1969), the first of his “Real-time exhibitions”, Vaccari focuses the photographic lens on individual spectators gathered in a dark room after illuminating them, leaving them the opportunity to hide their faces behind a mask. What he proposes is a completely new artistic experience, in which the public becomes part and subject of an action and is invited to establish an instinctive relationship with things that happens.

These reflections are the premises of the famous Real-time Exhibition N.4 installed at the 36th Venice Biennale in 1972 (dedicated not by chance to the theme “Art work or behavior”) in which Vaccari puts in a room an automatic booth for passport photos and affixes to the walls, together with his photostrip, an invitation in four languages: “Leave a photographic trace of your passage”. The proposal is enthusiastically accepted by thousands of visitors, who thus become protagonists of the action triggered by the artist. The novelty – writes Vaccari – is that for a moment those who accepted the game had a space to manage independently, a private space immersed in the public space, where it was possible to give free rein to desire and dream. The fact that, thanks to the contribution of visitors, the work had been able to feed itself as an organism sensitive to the contingencies of the moment and to escape the author’s control to relate directly to the context and the public confirms the creative autonomy of the camera and its ability to grasp “a collective unconscious” which transpires from the traces of apparently anonymous events.

Vaccari’s fascination with the subliminal dimension of consciousness as a source of aesthetic experiences, from which the concept of technological unconscious in reference to the involuntary information conveyed by photography also derives, leads to his research on the theme of dreams. For the Real-Time Exhibition N.9: dreams the artist during the night of February 25, 1975 invites some people to sleep in Piero Cavellini’s gallery of in Brescia and the next day asks bystanders to tell their dreams and then exhibit their testimonies together with the Polaroid documentation of the phases that preceded sleep. Dreamlike activity, like photography, also neutralizes the subject’s will to give space to fragmented messages that arise from an often disordered reworking of what happens to us when we are awake. Vaccari, who starting from the early 80s begins to record his nocturnal visions in a dream book in which words and images replace the photographic impression, therefore is not interested in the surreal aspect of the dream, but in the uncontrolled exposure of self that it implies and its unpredictable intersections with reality.

The Migrazione del reale exhibition, his first solo show at the P420 gallery in Bologna, focuses on a series of photographic prints on canvas that portray some pages of those notebooks of dreams. The gallery is immersed in the penumbra and a light illuminates each painting only when the visitor approaches it, as if in a liminal state of consciousness he cautiously enters into a dream of others to inhabit it with his own night desires and fantasies. Once again, even if in an apparently colder way than his famous performances, the artist asks the public to participate in the ideation of the work, which acquires evocative depth thanks to his imaginative contribution. “The dream – explains Vaccari – functions as an activator of reality, namely as a pretext to detour an apparently definite situation towards unexpected results, unexpected reality”.

His diaries, whose deciphering provides an intriguing and almost voyeuristic pleasure, hint at situations of an ordinary nature which the dreamlike reminiscence makes unconcluded but mysteriously revealing. Between imaginary exhibitions, sketches of familiar scenes made Kafkaesque by sudden nonsense, hang gliders pulled by planes, Russian priests, daughters who turn into bees and eagles with their hats, the real world seems to be emptied of concreteness while the illogical elements of the dream take on a disturbing need. Handwriting is accompanied by expressive and chromatically violent drawings in transavantgarde style in which few essential pastel strokes re-read the programmatic residues of everyday life (the cultured routine of Vaccari, however, which includes Majakowskij, the pictograms of Capogrossi and the latrines of a cinema in New York) making the observer sink into a maze of parallel worlds.

These verbal and pictorial fantasies do not lose the impartial inventory nature of the Expositions in real time: the dating of the notebook, presumably close to the dream experience, is flanked by the sometimes slightly deferred one of the drawing and then that of the realization of the photographic canvas, later a few decades. The time lag between the initial experience, its first manual recording and its cataloging through the photographic lens seems to dramatically dilate the video short circuits in which Vaccari at the beginning of his career confronted his own image, discovering himself the first spectator of himself, and stimulated the observers to experience a similar return of their actions. A striking and visionary change of scale, both spatial and temporal, concludes the exhibition in the video Oumuamua (messenger who comes first from afar), which documents, with a sequence borrowed from a Californian astronomical observatory, the trajectory of the interstellar asteroid which in 2017 (the same year in which Vaccari takes the photographs of the exhibition) came dangerously close to Earth. The celestial boulder, which among 120 billion galaxies, each populated by millions of stars distant from each other billions of light years, crosses the Earth’s gravitational field and then disappears into thin air is the cumbersome dream of a space telescope with the lens wide open on Infinity. 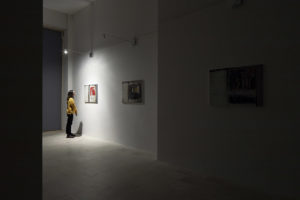 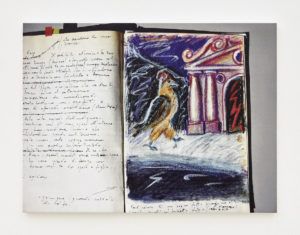 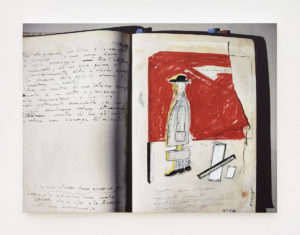 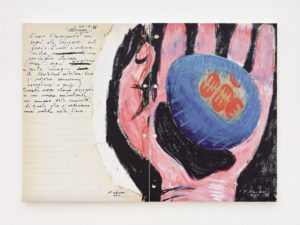 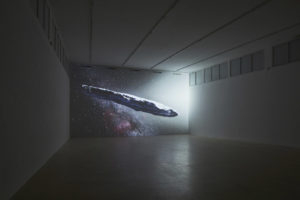