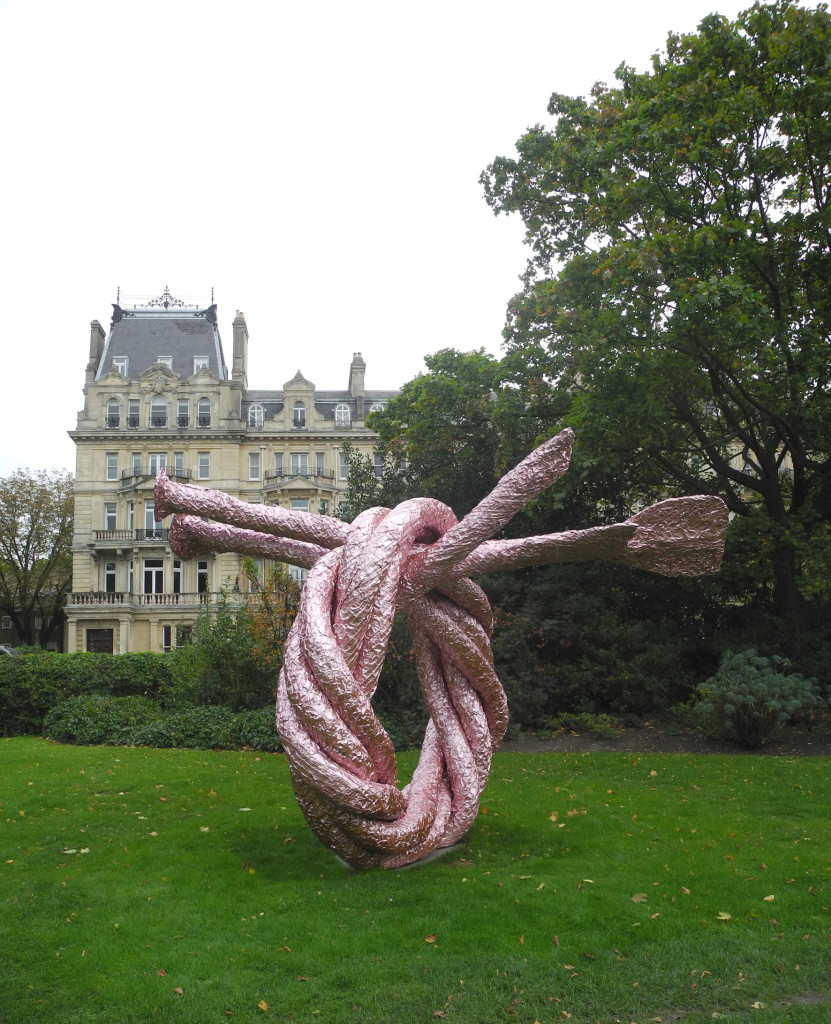 Clare Lilley – responsible for the Frieze Sculpture Park section of the Frieze Art Fair 2017 – had had the functional idea to anticipate the opening of the exhibition to July 5th and to close it on October 8th along with the Fair, thus increasing the interest for public art also among a great number of occasional visitors to the suggestive English Garden during the summer season. Besides, this edition was richer than the previous one in number of pieces exhibited (24) which the curator had mainly chosen among already known art works. As a consequence, a feeling of monumentality prevailed due to a lack of works based on new technologies and more experimental ideas. This, of course, satisfied those who especially appreciate museum sculptures. The chosen sculptures belonged to important galleries, collectors and institutions that sponsored the costs of the operations needed to display own art works. Obvious criteria to choose the works had been their relationship to nature and, for logistic reasons, that they in large part came from the UK. Moving along the exhibition itinerary, the  constantly variable sun light gave the art works ever changing aspects.
London based Marlborough Fine Art had lent a typical work by Magdalena Abakanowicz (a Polish artist that passed away a few months ago, a survivor of the Nazi invasion of her homeland), a bronze statue of a person without head and hands, in front of a mysterious wheel of fixed blades  symbolizing “history that ‘oppresses’ and the cyclical potential of renewal”. Rasheed Araeed (Grosvenor  Gallery, London) was present with a geometrical metal structure painted in “Summertime” colours; Reza Aramesh (Leila Heller Gallery, New York/Dubai) with a metamorphosis, a man with a billy goat’s head, that tried to free himself from existential bonds; Miquel  Barceló (Acquavella Galleries, N.Y.) with the funny vertical figure of the 25 metres high “Grand Elephandret” (already displayed in Union Square in New York) that balanced on the trunk planted in the ground. The artist has given the elephant a textured body to enhance the perceivable quality of the substance  just like in his tactile paintings. Inspired by the Elves in the Scandinavian mythology, also a theme Goethe used for a ballad that Schubert set to music, Anthony Caro (Annely Juda Fine Art, London) combined a mix of materials from building sites, whereas John Chamberlain’s (Gagosian Gallery, London) work was a pop iconography, a knot of plaited of big bright pink aluminium nails; from Holtermann Fine Art (London) there was Tony Cragg’s  shining sculpture in wrapped forms (also shown at Arte Basel 2015) and from New Art Centre, Salisbury together with Gagosian, London  Michael Craig-Martin’s elegant red painted steel silhouette of a wheelbarrow. Urs Fischer (Gagosian, London) had the skeleton placed on a chair by an “Invisible Mother”, all on top of a round basin looking like a fake fountain; Gary Hume (Sprüth Magers, Berlin and Marthew Marks, N.Y.) a solitary and unexpressed dark marble sprout of Brancusian essentiality. An ironic Disney figure, a 6 meter high Mickey Mouse which recalled the wooden “Pinocchio”, that was displayed here in 2013, was KAWS’s (Perrotin, Parigi) contribution; Takuro Kuwata (Alison Jacques, London and Salon 94, N.Y.) had two totemic ceramic works, with clear exotic references, onto which colored details were affixed; Alicja Kwade (kammel mennour, Paris) a large and real stone and a virtual one of double size created with an optical illusion using a mirroring diaphragm (the natural/artificial ambiguity attracted the on lookers). Mimmo Paladino (Waddington Custot, London) – the only Italian artist – distinguished himself from the context by showing an identifiably introspective figure made of three burnished bronze balls with some archaic tridimensional letters and mini sculptures on the surface. Pangolin in London featured the Italian-Scottish artist Eduardo Paolozzi’s with the huge figure of the Roman God Vulcano made up of a fusion of metal parts. Ruinart Champagne (group LVMH) had picked Jaume Plensa’s  sculptural bust formed by a refined tangle of signs and letters in stainless steel, created to honor the Benedictine Monk Dom Thierry Reinart who started producing champagne, a production then carried on by one of his descendants; Thomas J Price’s (Hales London/N.Y.) three votive heads on three pedestals,  distant one from the other and all three facing different directions to avoid each other; Peter Regli’s (Lévy Gorvy, London) black marble balls that formed  a childish “snowman”. Sadie Coles HQ (London) ‘planted’ an Ugo Rondinone’s bronze tree waiting for a new spring, a white coated with enamel that gave it an anemic look under a pale moon shine. It brings to mind the rusty coloured mechanical grafts displayed by Ai Wewei last June in Domplatz in Basel during the Art Parcours. Sarah Sze (Victoria Miro, London/Venice) was present with a light and poetic hammock that cradled delicate embroidered petals and the American artist Hank Willis Thomas (Ben Brown Fine Arts, London) with “The Endless Column”, 22 footballs of painted synthetic resin, one on top of the other, to honor the most loved sport by the British; Bernar Venet’s (Blain | Southern, London) with a dynamic installation of acute unequal angle shaped elements pointing towards the sky, placed on the grass, whereas the nearby stitched white cube by John Wallbank (Arcade, London) in competition with the emerald green it was surrounded by. To finish, Bowman Sculpture (London) had chosen a classical human head that Emily Young had cut in a volcanic stone. 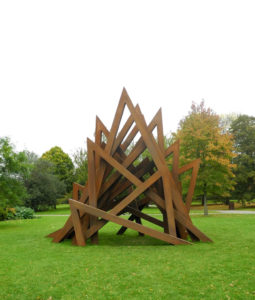 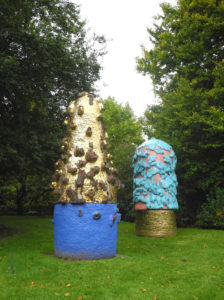 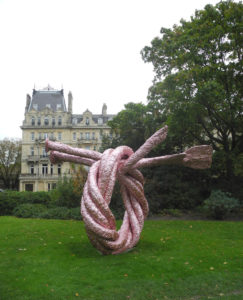