Alexandre Bavard (aka MOSA). A..

Uccidi l’unicorno by Gabriele Sassone (teacher of Critical Writing at Naba in Milan) is a book that we recommend to all who deal with contemporary art but also to all the others because it talks about the world, life, us. The intertwining of the personal and the political, the public and the private, the history of art and the personal story of the protagonist who tells it, is resolved by the author with a brilliant narrative device. The protagonist must prepare a speech at a conference on Art in the age of social media for the morning after.

He has one night at his disposal during which his memories, personal affairs, his dramas, thoughts, beliefs take over any slide he thinks to include in his speech. Starting with his youth: The title Uccidi l’unicorno (Kill the Unicorn) is taken from the song Gutter Ballet by Savatage “one of the finest metal bands ever”. The writer wants to kill the unicorn by grabbing its horn with his bare hands. “The unicorn is youth returned to kill me … And I regret never having been young: I always had a goal“.

And we spend the night following him on his journey, in his studies on the history of art, his readings, his home, relationships with his family, his experiences, books, films, people met, observations, thoughts on today and tomorrow, in the present and in the future, in relations with politics, with the artists in the Milanese and international art world.

We follow him in his moving between the Lescaux Cave, Duchamp’s Large Glass, the CIA, the poems of Di Ruscio who writes and works as a worker, Volponi’s text in which the objects of an office come alive, Van Gogh and his room, Federigo Tozzi, Cesare Brandi, Jules Verne, Paul Preciado, Giuseppe Berto, John Dewey. We follow him as he talks about the art market, his experiences in the art gallery as a salesman, the discourse as the beginning and end of contemporary art, as well as his wife, his son who wakes up, his youthful adventures and the more recent ones, the frequentations of gallery owners, the painter friend, youth violence, the studio visits.

We follow him in this disenchanted reflection on the art system that we can all subscribe to because of this mixture that is our life inextricably linked to the art we attend, for which we work, we write, and from which we cannot detach ourselves. But always with a thought that haunts us: we will have to agree with Johann Karl Friedrich Rosenkranz from whose Aesthetics of the Ugly, 1853, the author quotes: the art system is not only grotesque but is also gross, lascivious, crude, lewd, buffoonish, obscene, repulsive, clumsy, horrid, and sickening. And he adds: is it ghostly, demonic, witchcraft and satanic? Finally, the dawn lights are breaking, the book is ending and we go to the conference with him and we can begin to have our “night”, remembering that network of connections that stimulates each of us to compose a similar one, our network. 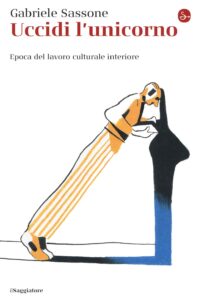