Back To Nature. Contemporary A..

“Rimpiattino” – title of the first solo exhibition of the artist Giacomo Montanelli curated by Alessandra Franetovich, Giulio Saverio Rossi and Gabriele Tosi – was born, rests and is housed in the spaces of the ex art gallery Margini in Massa, within the excellent setting created by the seventh edition of Cantieri Aperti Festival – a project by Semi Cattivi, part of the programming of Toscanaincontemporanea2020, supported by the Tuscany Region in collaboration with the Pecci Center of Prato. In “Rimpiattino” – the works on display are the result of a residence previously made by the artist through Cantieri Aperti Festival.

The title “Rimpiattino” already implicitly carries with it the playful dimension in which the artist Giacomo Montanelli, born in 1996, induces the observer to get lost.

In Rimpiattino, the artist hides and finds us pleasantly involved and shocked by the multitude of narrative possibilities that lie behind the pictorial display. With Calvinian lightness, like an unresolved Rampante Baron, Montanelli observes us, perhaps, from an elevated point of view, through two lowering canvases from the exhibition ceiling – suspended two large similar eyes (the latter artworks created off the residence), they represent the pictorial matrix of Montanelli, radiated forms, which derive and reach us without great perplexity from the historical avant-gardes; forms suspended at the limen between geometric precision and vibrant, vital abstraction – a painting that makes fun, serious, capable of presenting itself to the appointment (and here I quote the title of the eponymous and fantastic book by John Berger) with the dimension of possible.

A digital-analogue painting, which feeds on urban symbols, as well as those linked to the vast and sometimes perturbing culture of the web. Smiles, graceful insects and buttons (almost heart-shaped) float on the flat and decisive color, together with the classic PC monitor cursor.

What are we looking at? A landscape, a screensaver, a frame from an 80s video game – here the pictorial instrument becomes the act of displacement – many stories in motion happen at the same time of vision. A painting that could be defined as simultaneous in its being meaning, in spite of a first structural plastic rigidity of composition that dominates in the immediate signifier.

The extensive backgrounds of color, à plat, are reflective pauses, breaths of breath that we take between one sign, one symbol and another – footprints, incomplete writings – an alphabet reduced to the synthesis of a dreamed experience. To simplify is to reflect deeply. An apostrophe painting, which alternates the space of vision and which is determined by its own indeterminacy. Rimpiattino is probably solved if you experience it, playing, without any dogmatic purpose.

A profoundly light painting that leaves us an open crack, a hole, a voyeuristic game between nocturnal writings and probable walls of unknown places. An invitation to look beyond the mere pictorial structure. The famous Duchampian “Étant Donnés” comes to mind.

This dichotomy, depth / lightness can also be found in the only sculpture on exhibition, which has come down to us thanks to a personal reinterpretation and reconstruction of the artist’s familiar drawings. A blue sphere, dotted with holes, with an extension (almost a funny Collodian nose) lies on a wooden optical grid – the dichotomy between the rigidity of the line and the spherical softness introduce us to an imaginative introspection of the artist composed of contrasting but balanced energies.

Design and imagination run after each other in yet another dualism, in the sign of a fluid and liquid narrative, in line with a contemporary sensitivity that is increasingly mobile and intolerant of peremptory definitions. Montanelli’s works are, dadaistically paraphrasing, problems without solution, which with parsimony, with a visual economy – the elements in the composition in fact are always few, they leave us only clues or hypotheses.

In Montanelli everything is seriously play, visual puzzle, intellectual enigma. 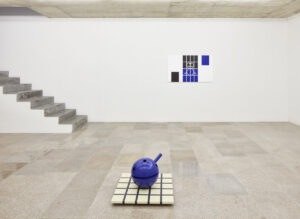 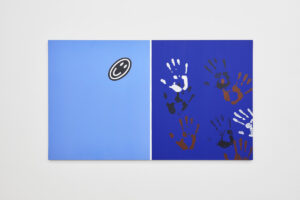 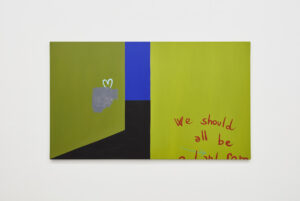 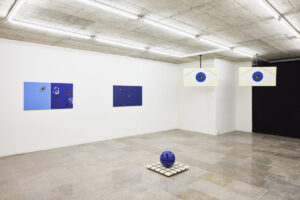