Giacomo Spinelli. The dialectic of the object

Giacomo Spinelli. The dialectic of the object

We attribute value to space and time mainly for one reason: their stratification. The evolving events of the reality of the world inside and outside of us are deposited constituting the sediments of memory. This shows our attachment to objects, in everyone’s life erected to personal and daily monuments.

In this horizon the object assumes a remarkable centrality because it becomes the rest of an archaeological process through which historical existence resurfaces. It becomes the only guarantor of memories because man, unlike other animals, fears forgetfulness. Therefore, in the object, the sensitive sensation – the memory – is trapped and guarded.

Giacomo Spinelli has intuited that matter with its potential can favor this process. At the basis of the design of the works there is the consideration of matter as a living force, an almost narrating voice capable of narrating by concealing – as only art can do – even the history of a city. In Spinelli’s work, in fact, the material personifies Taipei (in which the artist lived for a period) and its history linked to the passage of time, immortalized in the cartoons of the city’s big market, a pulsating clock that marks the daily lives of the inhabitants and characterizes the essence of the place, as indeed also the Chinese auteur cinema has shown. Think about the settings of the films of the award-winning Tsai Ming-liang The Hole (1998) for example.

At the origin of Spinelli’s works, in fact, there is the finding of fruit and vegetable cartoons found in the big market in Taipei: the artist searches for the material by implementing an inevitable exchange process that sees a necessary mediation with the other, which is linguistically and culturally distant. It makes essential the encounter between two opposite aesthetic reference systems, the western and the eastern, evident also in the figurative diversity of the wrapping of food products such as fruit and vegetables.

However, communication becomes a primary need conveyed by the artistic beacon of research that makes meeting possible thanks to the unique and universal language of man. The selective criterion with which the cartons are chosen is oriented by the refinement that the Asian commercial graphics possess, a uniqueness compared to the gray one typical of western packaging. The surface in fact has a varied color scheme that inevitably attracts the eye.

Once selected, the cardboard packagings are cut and processed in dimensions to fit the canvas. Thanks to a particular humidification process coined by the artist by superimposing the cardboard on the canvas, the image naturally translates to the pictorial surface, thanks also to a gradual process of elimination of the paper layers. The appearance of the image “by difference”, through the “upbeat” is an entirely western practice, now merged with the eastern universe thanks to the artistic process. A creation of the work by default, given by removing more than adding.

It is the revelation of matter made possible through technique. The final result physically reveals on the canvas a material geography similar to the map in which the play between the various layers obliges us to follow its imaginary morphology, a metaphor of sedimentation not only physical but temporal, an evocation of the passage of time marked by everyday life represented by the noblest protagonist of all reality: simply the object. 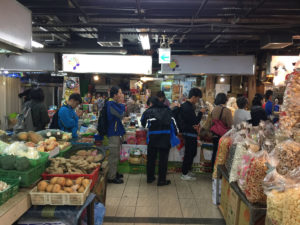 For all the images: Giacomo Spinelli. BEYOND DIRECTIONS -Taiwan made in here- courtesy Spazio Norbert Salenbauch