The artist residence of Roberto Fassone at GuilmiArtProject from July 29 to August 13 2021 involved both local people and occasional visitors of Guilmi (CH), while during the final events the project has been presented to the public. Ginnastica Artistica is a project curated by Federico Bacci, Lucia Giardino and Marianna Fazzi, and the title was born because they wanted to create something that could recall the olympic games of Tokyo 2020, making a swing between the concepts of art and life to allow questions and answers.

Like gymnastics, the artist triggers a tendency to the play and the absurd, according to the situation and the partner, so he succeded to build an alternation of different art moments during the residence, but always keeping up an atmosphere of lightness and spontaneity. The approach of Roberto Fassone is based on the relationship with the individuals he has in front, looking for their limits and to be able to overcome them in the second phase. Another point of his method is to give an aut aut, with a choice or a question that you must answer. That’s what happened with a little guy, Alessio, that he met near home, whose question was ‘What’s your favourite word?’, so this event has been transformed in a poster, on view at La Pietch space in Guilmi, until August 31.

Ginnastica Artistica experience has also developed through the performance Concerto (it took place on August 12 and 13 in collaboration with Carolina Cappelli): in this event the artist played selected tracks of a fast playlist in about 30 minutes. Black Sabbath dal vivo is a work created after a random discover of some old funeral posters, recovered by the artist and to use them like a new poster, for a concert of the famous heavy metal band. Profezie is a book that collects some thoughts and suggestions supplied by all the carachters of La grande catena dell’essere, a film produced by Roberto Fassone in Gulmi.

The artworks made during the residence are stronger thanks of their origin, that comes from occasions developed along the path, in which elements coming from the surrounding became basically part of a communication that overcomes the geographic boundaries of the project. A central point about this theme is the one explored in La grande catena dell’essere, the film screened during the final event, written and produced by Roberto Fassone in Guilmi, supported by all the GAP team, with some local people or visitors. All the characters are directly involved in a process of self-analysis and understanding of themselves, that we can appreciate watching the film, where they are physically presented, but identified in something else. They imagine themselves like in a different condition and status of existence, in places that are no more seen as Guilmi’s landscapes, but as a neutral setting. The artist works to create a reflection about contemporary and humanity of nowadays, but also an ironic narration, after a deep contact reached through a relation with the human fabric itself, that has been developed day by day.

During the sixteen days spent in the small town, Roberto Fassone thanks to the trust and the support of the GAP team, managed to establish and exploit a relationship with the community like a beginning, and not as the only guideline of the project. The focus deals about the keeping up of a space between the two points, stimulating an interaction with the people, but never entering in an empathic dimension, because it can’t allow to convey the cultural concept. 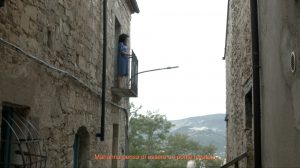 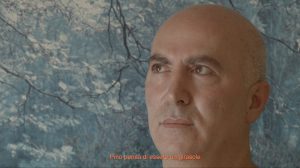 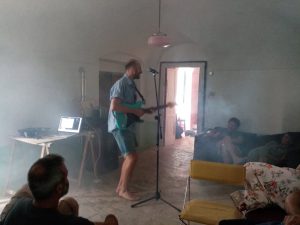