The performance at Connexxion:..

Gaggenau DesignElementi in Rome hosts the personal exhibition of Giulia Manfredi, an internationally known Emilian artist now based in Rome, winner of the fifth edition of the Cramum award in 2017. At the conclusion of the four-act project Materiabilia promoted by Gaggenau DesignElementi and Cramum, the exhibition, Il Giardino dei Fuggitivi, curated by Sabino Maria Frassà, reflects on the mature phase of the artist’s practice, suggesting an interesting dialogue between art and design. In line with the Cramum curatorial format, the works on display stand in reason of their sophisticated and experimental material approach but more significantly, on a closer look, the same material aesthetics the works is functional to the projection of an evocative and imaginative landscape, an ideal garden where Zen symbols and Mediterranean motifs converge in harmony and order. 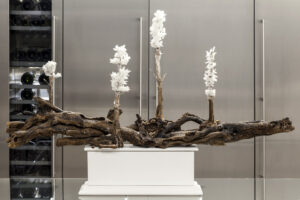 In an intimate and peaceful atmosphere, Il Giardino dei Fuggitivi solicits the memory of an ancient landscape as if drawing attention to an image that has escaped traditional historical narratives, the image of what could be an hypothetical garden if it remained intact to the eruption of Vesuvius which destroyed Pompeii in 79 AD. Metaphorically, this feature arouses a reflection between the regenerative and evocative power of images and dust. The artist’s interest in revisiting such a symbolic yet shared memory is poured into the projections of works on display, outlining a palpable and strongly material atmosphere and almost paradoxically, suggesting an escape in search of a slow and suspended time crossed by silence and meditation. In the words of the curator Frassà: “Her works present a hypnotic beauty that collides with the material they are made of: not only marble, but also smoke, mushrooms, bonsai and butterflies. Her work is dominated by the intimate complementarity between chaos and order, between life and death. Art is the escape route from the inner volcano towards the infinite”. 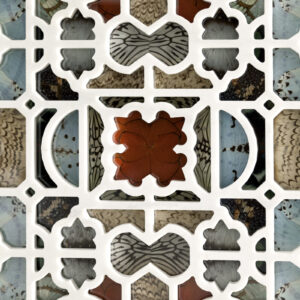 One of the distinctive features of Giulia Manfredi’s practice is the expertly calibrated material experimentation in which classic motifs and technological innovation converge on the borderline between naturalistic metamorphosis and abstraction. Stylistically, the works on display make explicit the methodical and rigorous study of antiquity and classical arts by the artist to which she combines botanical studies and experiments. This aspect justifies the presence of organic elements integrated in her work, outlining not simply objects but overall micro-cosmos in which the possibility of chance, automatism, change and order coexist. 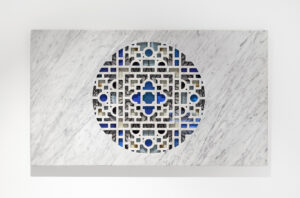 According to this vision, the works belonging to the Psyche cycle consists of a series of paintings in which fragments of butterfly wings are set in a geometric way on marble surfaces, suggesting a symmetrical and intrinsically harmonic composition. These are similar to the Rorschach patterns, historically used with projective intent to delineate psychological personality traits. If at first glance the reference to Mediterranean patterns becomes evident, the same motifs used by Manfredi translate more widely into a search for cognitive and mnemonic patterns, reflecting the evocative and projective power of images. A central role is played by Sacrarium, a large white sculpture in which the figure of a tree suspended in the atmosphere and enveloped in fog can be seen. In presenting such an archetypal and ephemeral subject, the artist reflects on the beauty and at the same time on the impossibility of fully grasping the immensity of the cosmos in its immeasurable complexity. 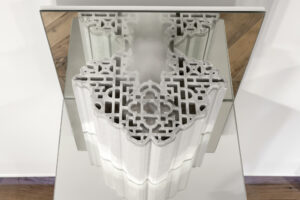 In the work White Matter, the artist confirms her interest in the metamorphic imprinting of art according to a composition that combines naturalistic elements, such as edible mushrooms and synthetic materials, printed in 3D, with mirrors and laser-worked marble. In this ideal artistic fusion between nature and culture, the artist recovers the affective and plastic processes of human living and feeling, suggesting the importance of assuming a symbiotic and sustainable attitude towards nature and the landscape that hosts us. 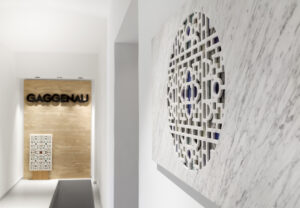 To walk through Il Giardino dei Fuggitivi is overall an anachronistic experience, an escape from the present through the metamorphoses of history according to the language of myth and symbol, projecting the desire for peace and harmony into the future. Expertly calibrated and stylistically rigorous, Giulia Manfredi’s personal exhibition reflects the evocative and imaginative power inherent in the artistic object in which to perceive the palpability and opacity of certain images that are as archetypal as they are ephemeral.