The performance at Connexxion:..

Let’s close our eyes and imagine going back in time to winter 1962. The weather is cold, although the summer saw a worrying record of drought in the southern regions, and snow regularly covers large areas of the north. In Bologna it snowed the first hours of Christmas Eve, respecting the most classic of traditions. Like all the rest of Italy and Europe, the city seethes in what will be remembered as the “fabulous sixties”: the years of the economic boom and of the first Mary Quant miniskirts, of the French nouvelle vague and of the films by Fellini and Antonioni, the Fiat 500 and 600 and the first versions of the Vespa 50, the successes of the Beatles and the Rolling Stones and the tragic deaths of Marilyn Monroe and the American president John Fitzgerald Kennedy. 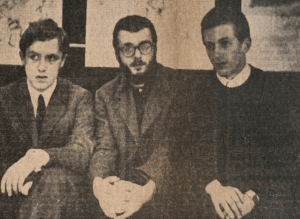 1962, in particular, unleashed a small revolution in the Emilia-Romagna capital: first of all, the swanky Galleria Cavour, a symbol of luxury shopping, was named after the famous Italian politician and patriot, abandoning the ancient wording of vicolo Bocca di Ragno, and a few months later the municipal council even decided to divide the urban territory into today’s districts that distinguish it – Borgo Panigale, Santa Viola, Saffi, Lame, Bolognina, Corticella, San Donato, San Vitale, Mazzini, Murri, San Ruffillo, Colli , Costa-Saragozza, Barca and Centro. 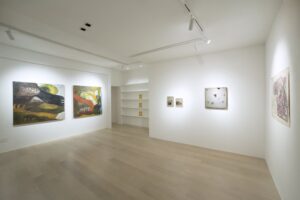 And what about art? Well, even in this case Bologna did not stand by and watched. Because, if in the United States and in the rest of the world the new trends of Fluxus and Pop Art were observed with curiosity, the Nuove prospettive della pittura italiana (New perspectives of Italian painting), 1962, the title of an exhibition inaugurated in the thirteenth-century Palazzo Re Enzo, reflected how local art was following the Informal wave: Francesco Arcangeli, Renato Barilli, Maurizio Calvesi, Duilio Courir, Enrico Crispolti, Andrea Emiliani, Oreste Ferrari, Emilio Tadini and Roberto Tassi introduced the work of artists such as Franco Angeli, Tano Festa , Mario Schifano and Giuseppe Uncini; eight, on the other hand, were the invited artists from Bologna, namely Vasco Bendini, Pirro Cuniberti, Luciano De Vita, Giuseppe Ferrari, Mario Nanni, Leone Pancaldi, Concetto Pozzati and Sergio Vacchi. And while in Milan there was debate about Arte programmata (1962) thanks to Umberto Eco – future Bolognese by adoption – and on the «Verri» one reads Considerazioni sull’Informale (Considerations on the Informal), 1962 by Barilli – Bolognese, however, by birth – a few blocks away from that same exhibition, in December 1962, the poet Patrizia Vicinelli concentrated on the work of three young artists on display in a self-managed space opened for the occasion. Previously, precisely in June of the Nuove prospettive della pittura italiana, the task of forming a group of four with the artists, instead of a trio, had fallen to Roberta Bianconi. 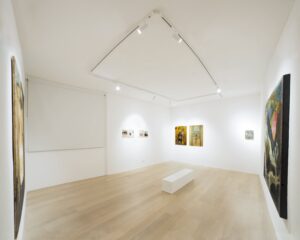 Here, at this point we can reopen our eyes. The imaginary gaze directed at that Bolognese winter can once again become real in the spaces of Studio la Linea Verticale. Because, as in that fateful December 1962, sixty years later, the attention is turned to that trio of artists who, without intending it and without expecting it, competed for the new perspectives offered by those who belonged to roughly the same generation. Maurizio Bottarelli, Alberto Colliva and Franco Filippi – the fourth component of the debut exhibition was Angelo Bozzolla – advance their own, now as then, in the gallery located Via dell’Oro 4B, not so far from Via Battibecco where they were more half a century ago. Gli arrabbiati del Battibecco. (The angry ones from Battibecco). Bologna 1962 is not, however, a mere re-enactment. The intent, according to the gallery owner Giovanni Avolio and the artistic director Vale Palmi, is rather to provide a suggestion, to trigger a renewed process of analysis and questioning having as a point of reference precisely the experiments of the three artists. On the other hand, already in that 1962 their efforts did not go unnoticed, so much so that Giorgio Ruggeri elaborated the peculiar expression recalled by the title, owing both to the “definition of ‘irrascible’ assigned years earlier to the New York exponents of Abstract Expressionism” – explains the curator Pasquale Fameli – and of the name of the street in the “Centre of Bologna where these young artists found their first exhibition space”. 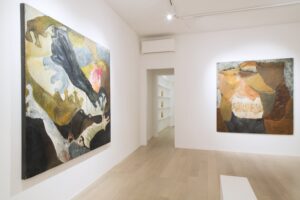 In the same way as the protagonists of the Palazzo Re Enzo exhibition, older by about ten to twenty years, Bottarelli, Colliva and Filippi also intended to “redesign the informal space through the formulation of new figural hypotheses”: therefore, the reconsideration of their work takes on a double value if one thinks not only of the anniversary – the same of the Nuove prospettive della pittura italiana  exhibition- but also of the first-rate role that painting is once again assuming, amply testified by the just ended Venice Art Biennale 2022 – rich, among other things, in numerous figurative examples. And, in this regard, the Heads by Bottarelli, “ready to disintegrate at any moment”, the “material events” by Colliva, “debris of a disintegrated world”, and the “tangles of signs” of Filippi, “cell nuclei waiting to take on some physiognomy” leave much to think about. They are three expressive solutions which, in probing new creative possibilities, seem to lend much of their verve to the freshest efforts of young painters, who, on the contrary, seem, in some cases, duller than their older counterparts. 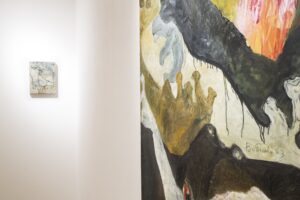 After all, even Bottarelli, Colliva and Fillippi looked at contemporary experimentation, from Fautrier to Manzoni, from Burri to Alechinsky, trying, however, to get away from it as much as possible, pursuing a path that was as original and personal as possible – Bottarelli’s Heads, for example, are less monolithic than those of Fautrier; Colliva’s combustions less theatrical than those of Burri, even if equally traumatic; finally, Filippi’s signs, less chaotic and jumbled up than those of Alechinsky. In short, “the angry people from Battibecco” – nineteen-twenty-year-olds in 1962 – had in mind what they wanted to escape from, just as they had in mind where they wanted to arrive: a substantial difference compared to the dramatic unpredictability offered by today’s existence. Not to mention that, as Mario Nanni said, “Bologna, in the Fifties, fervently repeated the historic event of the seventeenth century with the presence of the Carraccis”, and 1962 represented the peak of a cultural ferment that had “nothing to envy of what was being done in other cities”. Sixty years after their debut, Bottarelli, Colliva and Fillippi, at Studio la Linea Verticale, provide another exceptional example.