Glib Franko is a young Ukrainian artist who works with classic expressive media such as painting and graphics, of which he masters a wide range of technical and stylistic refinements deduced from the observation of the masterpieces of art history, which in his creative language amalgamate with spontaneity and balance generating absolutely contemporary atmospheres. The of him is an allusive and delicate figuration that uses natural landscapes and everyday situations as a pretext to experiment with the infinite possibilities of color to magically reinvent reality. The subjects to which he dedicates himself are very heterogeneous and vary according to the project that from time to time connects the different series of images: we find domestic interiors and exteriors, dreamlike and sketched human figures, pieces of abstract painting and fragments of a luxuriant nature, which looking carefully, we see as the dominant aspect of all the scenes he paints. The drawing, in the traditional sense of a black on white outline that builds the shapes to which the color will subsequently give three-dimensionality and consistency, is almost absent, or rather its function is fulfilled in a more free and changeable way by the color, circumscribed by the modulation of its same thickness.

Beyond the visual pretext attributable to snapshots of reality, what interests the artist is to experiment with a process of reworking of the visual memory in which airs, transparencies, thicknesses and measures blend together to restore the imprint of a moment recalled in a potentially infiniteduration. The canvas becomes the place for the transformation of the world into a chain of images belonging to a personal symbolic universe, in which life is not lost, on the contrary it finds itself in the delicacy of a changing imprint that manages to reconcile apparently conflicting notions such as “sensitivity” and “method”. It is an invention that rediscovers the roots of doing and that does not accept any ideological presupposition, but which at the same time seems to imply that art, as Claudio Parmiggiani wrote in A faith in nothing but all-encompassing (2010), “is stronger than reality, solely for a faith in a dream “. Glib Franko’s sensitivity is guided by a method, which in turn guides the movements of the brush in order to resolve everything it encounters in a sensitive chromatic emulsion that materializes the instant with precise, but also fleeting and light strokes. His approach to painting is somewhat reminiscent of the Impressionist style: in this case, however, the goal is not to capture the unrepeatable luminous essence of a place or thing at a certain time of day and year as did the nineteenth-century French masters, but to condense the emotionality of a vision in an ambiguous mental panorama, lucidly turned to the tones of dreams and re-enactment, in which the viewers can project and decant their experiences.

Certain apparently irrelevant details of reality, such as the metal back of a chair or the thorn on the stem of a flower, acquire an endogenous shimmer within the image, as if they were the trigger of the surrounding pictorial improvisation, the keystone of a a feeling that becomes an ecosystem in the incessant experimentation of colors, textures and shapes. The secret territory in which the artist’s inspiration lives is a fertile ground for the “intimacy” of visual objects to blossom, finally free from the usual relations of interdependence that limit their meaning in ordinary reality: subjectivity (of the author and of the viewer) dissolves in a mysterious pictorial forest which, although formally never escapes the control of its creator, sometimes seems to exceed our possibilities of understanding with a superior omniscience. One of the engines of Glib Franko’s poetics is the celebration of the spectacular self-sufficiency of color, whose creative potential is implicitly assimilated to the capacity of nature to regenerate itself and to sneak up on itself even in the most inhospitable corners of the world. This is why the artist’s paintings literally seem to exude nature, even when they appear to be focused on something else.

In the series entitled “Synchronization” (2019), for example, the artist juxtaposes two images on the same canvas that in their diversity make up a harmonic diptych, to emphasize the need to tune in with the elements we interact with, whatever they may be. The relationship of mutuality that is established between the two images neutralizes the abstract vertical line that separates them, demonstrating how the idea of ​​border is blurred, in painting as in nature. The works of the “Blossom” series, on which the artist focused for almost three years instead constituted a sort of pictorial study of the natural flowering process of different species of plants, united by the ability to produce those fragile and ephemeral emanations of the self that we identify as flowers. In this case the aim is not to reproduce the visible appearances of plants as in traditional still life paintings, but to plumb through the dripping and transparencies of color the miracle of the germination of beauty, the prodigious birth of a form from a completely different matrix that, however, keeps its reproduction codes.

The complex project “Antipodes, balance, walk on the golden line” (2019) brings together a series of works whose title reproduces the geographical coordinates of the place where they were made. Here the artist seems to plumb himself in relation to the atmospheric, physical and mental environments he crosses, synthesizing this correspondence with a gestural and instinctive painting (made even more pertinent to the specific time and place by random environmental interventions such as rain or wind) to which he then superimposes elegant minimalist geometric shapes in gold and silver. The attempt is to create a dialogue between rationally irreconcilable languages ​​through the manifestation of the parallel dimension in which it can take place. Here too the intuition of such infinite possibilities of coexistence, normally destined to never meet, is indebted to its profound harmony with natural processes and with the still unexplored worlds that their ability to adapt implies.

Glib Franko, despite his young age, has long established his prestige among collectors and institutions in his country of origin by participating in important exhibitions such as ARTLEVEL design festival and Open Art Fair at the Contemporary Art Center and in recent years is conquering also important international awards, such as the invitation in 2019 to participate in the collective exhibition “The Shadow of Dream” held at the Giardini della Biennale on the occasion of the 58th edition of the International Art Exhibition. 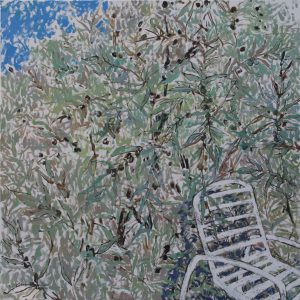 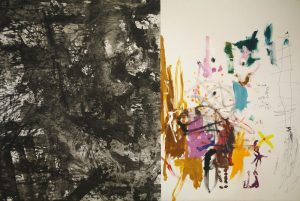 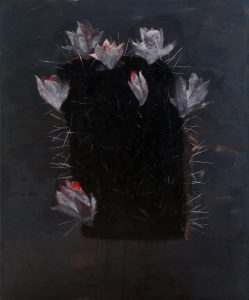